Priyanka Chopra Jonas walked the red carpet at Cannes 2019. In one of her pics, Ishaan Khatter has commented adorably. Seems like he shares a friendly bond with his brother, Shahid Kapoor's ex-GF.

Have you been in a relationship in which you had developed a cordial bond with your ex's brother or sister? That's magical, isn't it? Not only because of someone else also giving us the secrets, likes and dislikes of our partners but also because there is someone to reckon upon when it comes to decisions of relationships. (Also Read: Deepika Padukone Posts Her First Cannes 2019 Look, Ranveer Singh Calls Her 'Elegance Ki Moorat')

Bollywood has witnessed many ex-couples and perhaps, Shahid Kapoor tops the charts. His fans know that he was once rumoured to be dating Priyanka Chopra. But that was quite some time ago, and today, they are happily married people. Shahid Kapoor is married to Mira Rajput Kapoor and Priyanka Chopra became Priyanka Chopra Jonas last year when she took the nuptial plunge with Nick Jonas.

Ishaan Khatter Reveals The Name Of His Favourite Ex-Girlfriend Of Brother, Shahid Kapoor 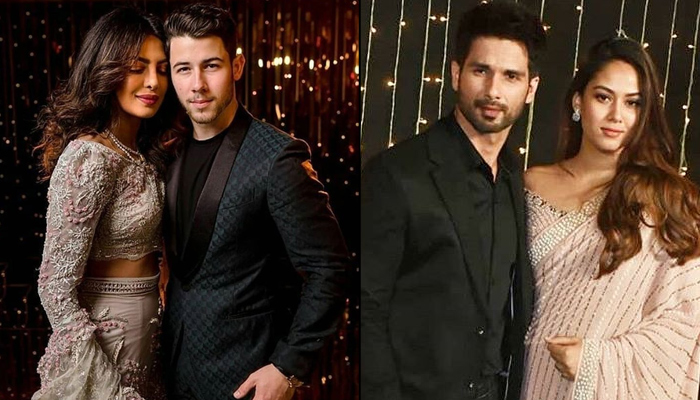 Priyanka Chopra Jonas is currently in Cannes to walk the red carpet today (May 17, 2019) for Cannes Film Festival 2019. Priyanka shared a lot of pictures from her Cannes 2019 red carpet but one which caught our attention was wherein she was doing her photo shoot on the stairs, and guess who commented on the photo? Well, it was her ex's brother! Yes, Priyanka Chopra Jonas' ex-boyfriend, Shahid Kapoor's brother, Ishaan Khatter commented, "Who’s in the back, though?," on the following pictures of PeeCee: Looks like Priyanka shares a friendly bond with her ex's brother, right? In fact, when Ishaan and Shahid were guests on Neha Dhupia's show, BFFs With Vogue, Ishaan had revealed that his bond with Priyanka was the friendliest. He had said, "Oh gosh! Like the most, I cannot say, but I had the friendliest equation with Priyanka Chopra."

In an interview once, talking about how there should be a healthy vibe between the exes, Shahid had shared, “I think there should be eventually. If you are happy and if you are settled then there’s no reason to be uncomfortable with other people. If you are uncomfortable with something and holding on to something, I think those are the times that we should probably be awkward because there’s something within you that’s not settled. But if you’re happy with where you are, you always wish everybody happiness. I wish them all the happiness.” 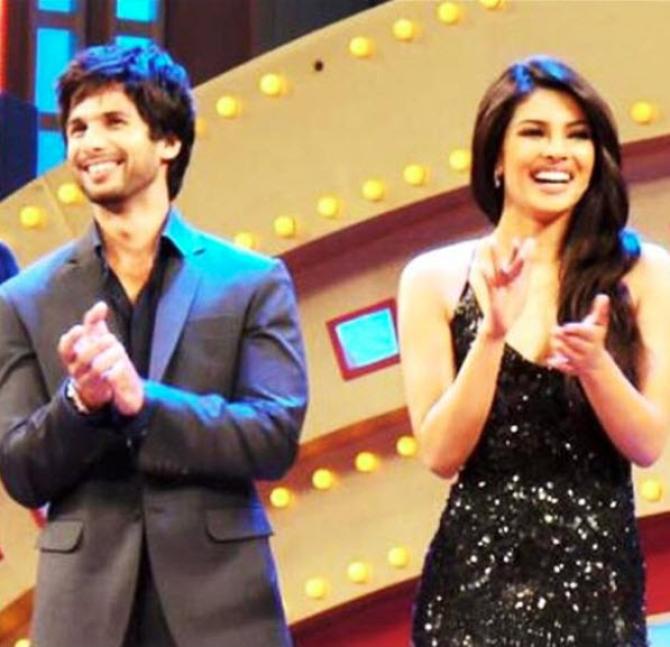 Shahid Kapoor had come on Koffee with Karan season 6 recently with Ishaan Khatter. Talking about his ex-girlfriends, Kareena Kapoor Khan and Priyanka Chopra Jonas, Shahid had commented, “See, my relationship with Kareena was longer and with Priyanka, it was shorter. I think the man that I am today is because of all the experiences that I’ve had. So I wouldn’t want to delete any of the memories. It’s taught me a lot." (Must Read: Kareena Kapoor Khan And Saif Ali Khan Spotted Outside A Clinic, Netizens Suspect She Is Pregnant) Do you know once, when Shahid and Priyanka were together, Income Tax people had come down to PeeCee's house in Mumbai? And it was Shahid Kapoor who had come down to her place for her rescue. Priyanka had herself revealed the same once and had shared, “Yes, Shahid was there at my apartment when it (the income tax raids) happened. He lives just three minutes away from my home and it was but natural for me to give him a call when all that was happening. My mother was also supposed to be there but she couldn’t make it. So I gave him a call and he rushed to my apartment just as he was (reportedly in shorts).” 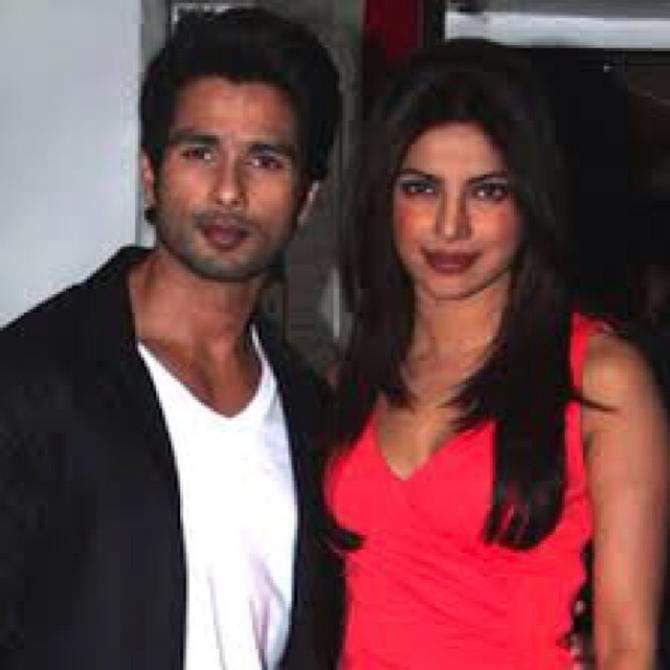 Speaking about Priyanka Chopra Jonas, her wedding and her professional achievements, Shahid Kapoor had recently stated in an interview, “Priyanka is doing amazingly well I am very happy for her. She has made all of us proud. She always had the potential to become an international star and she has proved it.” In fact, when Priyanka had posted her wedding photos on social media, Shahid had commented, “Many, many congratulations to Priyanka and Nick. Marriage is a beautiful thing, I can say that from my experience and I wish her all the best.” 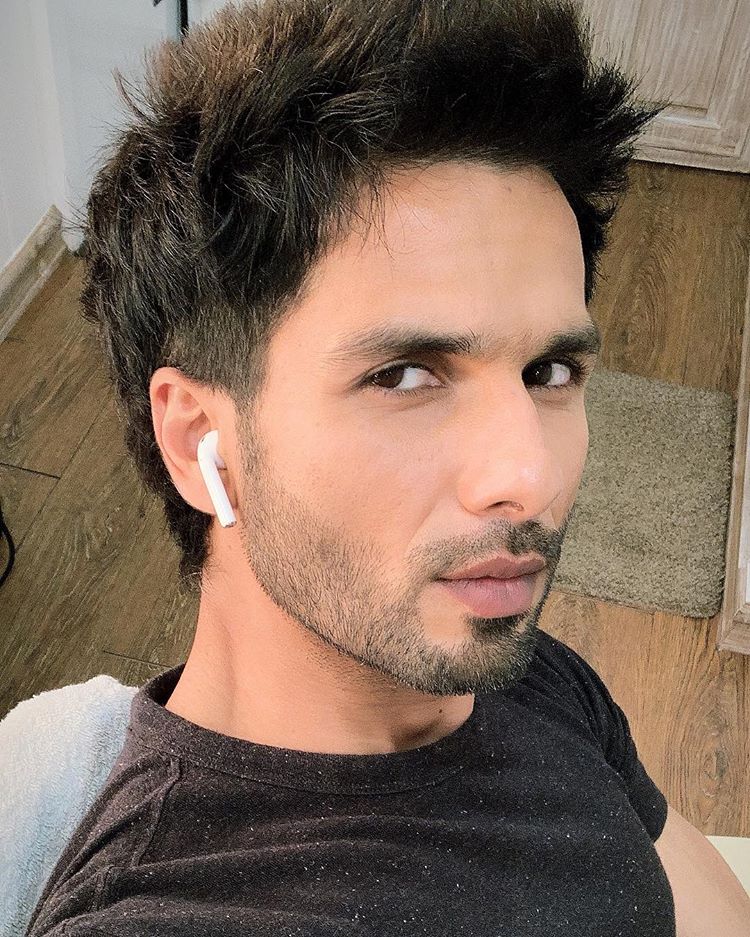 Shahid Kapoor is now married to Mira Rajput Kapoor, and he is as doting as it gets. Talking about Shahid, his wifey, Mira had once revealed, “Shahid is an extremely loving and supportive husband. It comes naturally to him. The smallest things he does make me smile and feel so loved, like when I wake him up in the middle of the night with a foot cramp and he soothes it. Or how hands-on he is with Misha and has really made sure she doesn’t feel the lack of my attention and presence, especially in these last few weeks where I can’t pick her up or play very much with her. It’s everything put together. I couldn’t have asked for a better partner to walk beside me through this journey." (Don't Miss: Chhavi Mittal Shares How She Is Handling Her Work And The Pain Of Delivering Her Baby Boy, Arham) 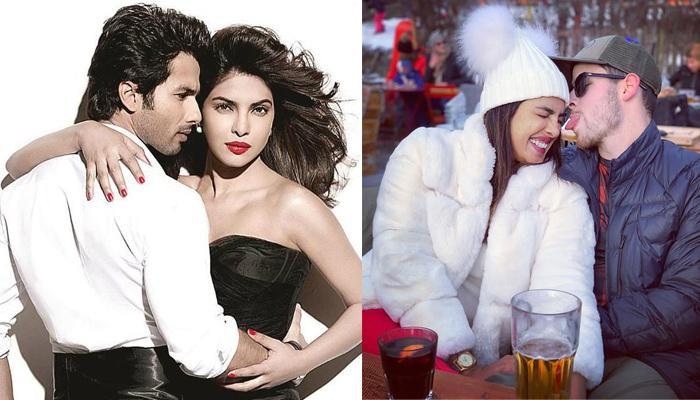 Bollywood is a strange world altogether. One moment you will read articles about two celebrities dating each other and the next moment, their breakup rumours will be all over the internet! One such alleged couple, who’s patch-up and break-up rumours flowed in at the same time was that of Priyanka

Ishaan Khatter Reveals The Name Of His Favourite Ex-Girlfriend Of Brother, Shahid Kapoor