Jahan Tahiliani and Ananya Bhandare's intimate wedding had featured fab outfits to out-of-the-box decor and many more, which were specially designed by his designer father, Tarun Tahiliani. Check out!

Weddings in India have changed over time, and now most people are opting for intimate affairs amidst the presence of their close ones. However, two things which can never change in a wedding are: first, the week-long ceremonies, which involve fun, food, dance and lots of laughter. And the second thing, which is the most vibrant part of a wedding, is the bride's ensemble in each of the pre-wedding ceremonies and also the one for D-day, which becomes a head-turner. For this, the bride keeps checking her favourite designer's social media handle and picks the best ones to look the prettiest at her wedding.

But what if the famous designer is your father-in-law? Undoubtedly, the bride's wardrobe and the pre-wedding, wedding, and post-wedding design elements would be one of the most looked after. Yes, we are talking about Bollywood's famous designer, Tarun Tahiliani's son, Jahan Tahiliani's wedding with the love of his life, Ananya Bhandare in February 2022. They had got married in an intimate wedding ceremony in the bride's home, followed by a mehendi ceremony, cocktail and reception the following month. Soon after the wedding on February 23, 2022, Ananya had taken to her IG handle and shared the first-ever picture with Jahan. In the picture, they were flaunting their engagement rings while holding each other's hands. Alongside it, Ananya had written: 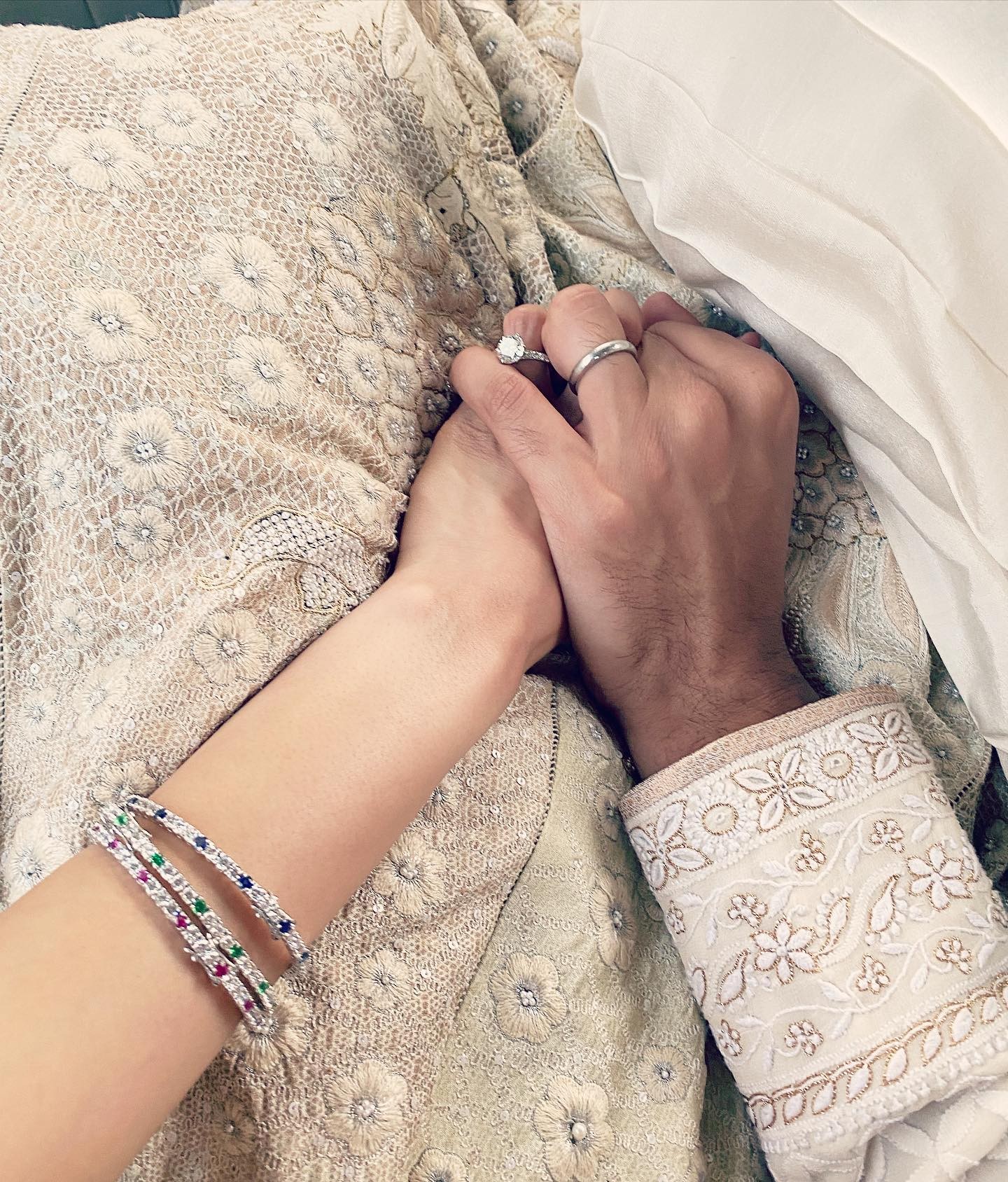 On February 22, 2022, Jahan and Ananya had tied the knot in an intimate wedding with their family and friends in attendance. For D-day, Ananya had opted for a pichwai lehenga based on the ancient art form of Pichwai. On the other hand, Jahan had looked handsome, twinning in a cream-hued sherwani.

In an interview with Vogue India, the then-bride shared that it was a dream bridal experience for her to get a chance to select from an array of designer clothes from her father-in-law, Tarun Tahiliani's bridal collection. However, she mentioned that her father-in-law had given no compulsion on her to fit into the mould while selecting a designer ensemble. In her words:

“It really was the dream bridal experience, made extra special as I got to plan it with my father-in-law, who was super excited about the process too. The best part was that he did not have any expectations for what I should wear. He encouraged me — as he does all his brides — to be myself, rather than fit into a mould. I was originally to wear a saree, but I didn’t feel like myself in it. I changed to this lehenga just five days before the wedding, and it ended up being my favourite look from my bridal wardrobe!”

To this, the popular designer, Tarun Tahiliani also shared:

“I wanted both Jahan and Ananya to wear exactly what they were comfortable in. The wardrobe had to be an expression of their individuality. They had fun in what they wore — that was the idea.”

Ananya's wedding lehenga had featured an intricate embroidery skirt, a blouse with tassel adornment, and a double dupatta. She had attached one dupatta over her blouse and the other one as a veil on the head. Her makeup artist, Jasmeet Kapany had kept her makeup subtle with rosy pink lips and soft glittery eyeshadow with heavy eyeliner. She had teamed her look with a diamond necklace adorned with emerald, matching earrings and a beautiful diamond maangteeka. 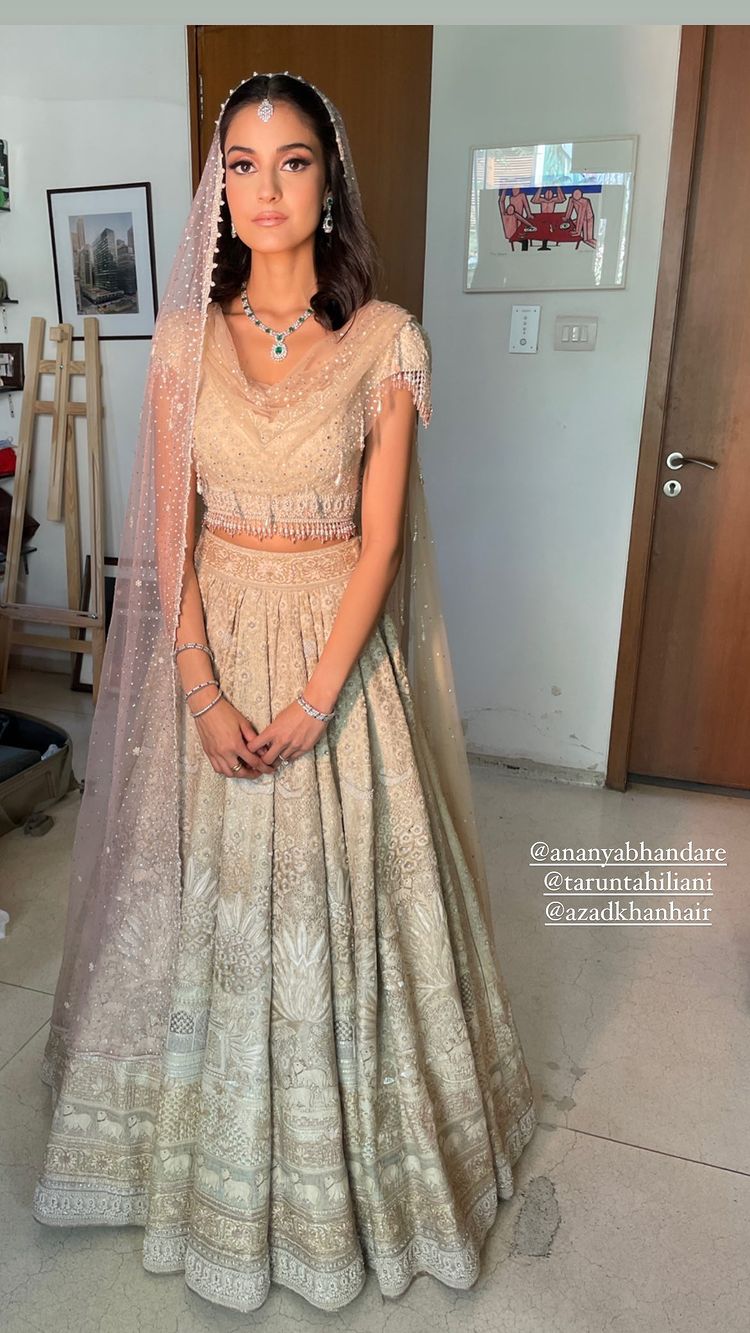 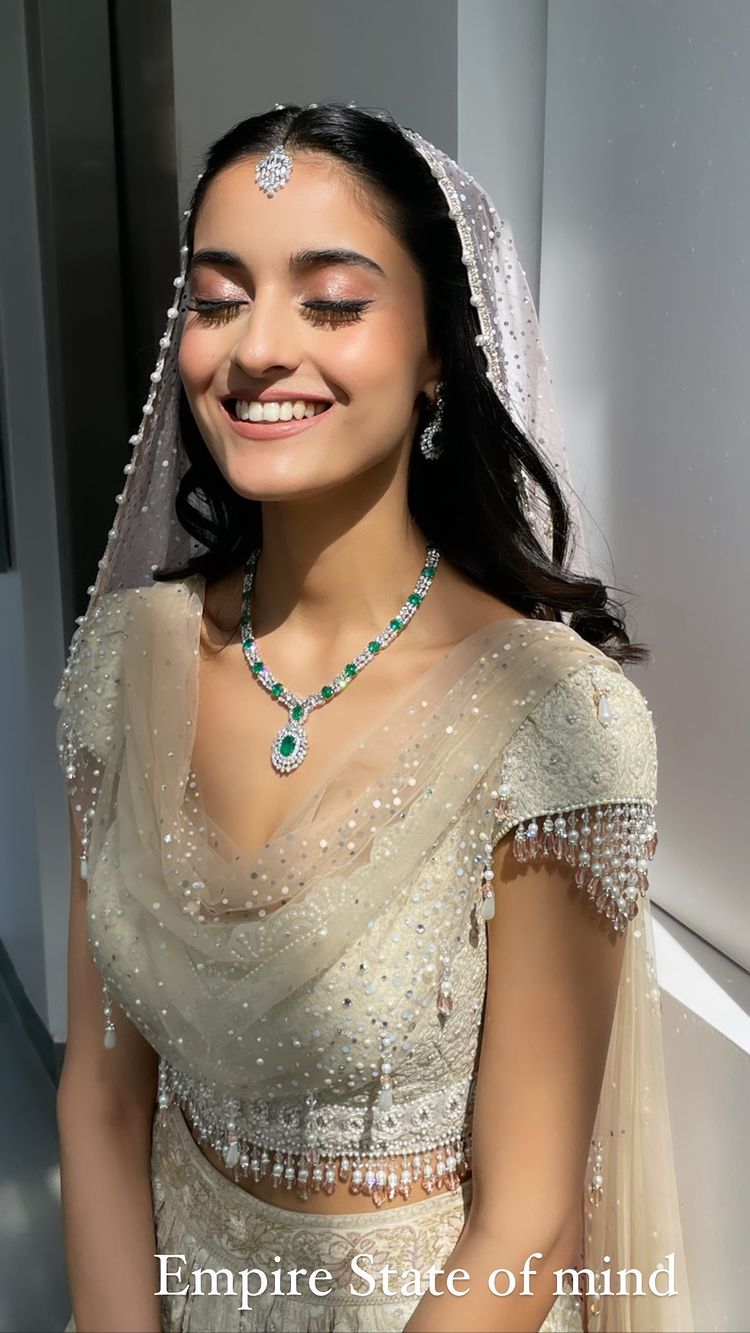 Ananya and Jahan's white wedding was filled with Indian classical design elements and minute details inspired by the 90s era. The food was specially prepared based on the delicacies from Uttar Pradesh, Andhra Pradesh, Maharashtra and Sindh. This was arranged by Ananya's aunt, Sonali Asgaokar.

Opening up about the decoration and food, the then-groom said, “Both our fathers take great pride in planning their parties, and love to host. They were most excited to plan the wedding. Our mothers are more practical, and made sure all important bases were covered." To this, Jahan's then-bride added:

“I wanted the whole experience to be really sensory. So we had an abundance of fragrant white flowers. I walked in to All You Need Is Love by The Beatles. We let our parents and siblings do all the planning. We were really just in-charge of enjoying our celebrations, which is all we wanted in the first place” Jahan and Ananya's wedding ceremonies had a twist on the normal pattern of weddings in India. They had celebrated the wedding ceremonies like mehendi, sangeet-cocktail and reception not within a week but after one month of their wedding. These festivities were also celebrated in their homes which had given a more intimate and personal feeling to the then-groom and then-bride.

For the mehendi ceremony, Ananya had worn a traditional red lehenga adorned with zari and embroidery works with a touch of modernness. On the other hand, Jahan had opted for a blue-coloured linen kurta. The mehendi ceremony was filled with retro music with a mix of Chinese food.

Ananya had worn all the unique outfits from her designer father-in-law, Tarun Tahiliani for each wedding ceremony. However, she had opted for an Ellie Saab white gown for her cocktail party. She had accessorised her look with a maang teeka, an armband, a bracelet and earrings, all of which belonged to her parents and her in-laws and were passed on as heirloom jewellery. And her husband, Jahan had looked handsome in a simple suit for the evening.

This was an epic night by the couple, as Tarun had himself orchestrated, and this reportedly was a fabulous evening for everyone there. Sharing her thoughts on the same, Ananya shared in the same conversation:

“It was fantastical with a gigantic Pegasus hanging above the bar, kathakali dancers on the dance floor, and a four-sided bar. We got a glimpse into the wildly creative mind of TT. I threw the jewellery together last minute, and it was a mix of pieces gifted to me by my parents and in-laws.”

Jahan and Ananya's reception party was the end of their wedding festivities, and undoubtedly, it was superbly elegant. In the same conversation, Tarun Tahiliani mentioned that the reception party was designed in such a way incorporating various Indian elements to it, along with the Live brand's performances and many more, to keep the guests thoroughly entertained. And the cuisine was based on an Italian theme. Sharing the same, Tarun added:

“As for the wardrobe, the aesthetic was meant to be fun, Indian and colourful for the mehendi and sangeet-cocktail. The reception was all about streamlined elegance in a beautiful canopy surrounded by a magical forest. Ananya even wore a western gown for one of the events, exactly as it should be.”

For the reception, Ananya had looked oh-so-gorgeous in Tarun's another designer ensemble, a Bloom lehenga. The lehenga was adorned with tons of tiny flowers, making her look no less than a princess. She had also opted for maroonish stone embedded jewellery, including a neckpiece paired with pasha earrings. On the other hand, Jahan had donned a jade sherwani for the reception party. Concluding the conversation, Ananya said:

“Jahan is not very fussy when it comes to his clothes. He didn’t have any pre-conceived notions of what he wanted to wear, so he just picked outfits that would complement mine.”

For the unversed, Ananya Bhandare is a health coach and founder of the healthy snack company, Jungly Delights. On the other hand, Jahan Tahiliani is the founder of Tahiliani Homes, a promoter at IT company Helios Next and the co-founder of the online retail management tool Fabtrack. After meeting at a friend's party, chemistry had brewed between the duo, and they have been together since June 2019.

Ananya and Jahan's wedding festivity was indeed drool-worthy. What do you think? Let us know!

Next Read: Karisma Kapoor's Most Expensive And Luxurious Items: From Hermes Bag To Land Rover Freelander 2