Last night, on March 22, 2019, Hina Khan and Rocky Jaiswal went on a romantic late-night drive. Checkout the videos of the same along with Hina's emotional message for her 'Ro'.

Famous television soap opera, Yeh Rishta Kya Kehlata Hai has given us many examples of reel-life couples falling in love in real-life. But one such couple who were not even acting together fell in the love trap too. The mention is of none other than the former lead actress of the show, Hina Khan and the ex-assistant director of the serial, Rocky Jaiswal. Ever since Rock proposed Hina on national television when she was inside the Bigg Boss 11 house till date, the lovebirds have been spreading pyaarbhari vibes everywhere.

Rocky and Hina make one of the most stunning, madly-in-love and adorable couples, who are ardent social media users. While he becomes a shayar for his ladylove, she too expresses her love for him openly on social media platforms. Last night, on March 22, 2019, the duo went on a romantic late-night drive. (Also Read: Rubina Dilaik Gets Mercilessly Trolled On Singing For Abhinav Shukla On 9 Month Wedding Anniversary) The Kasauti Zindagi Kay 2 actress took to her official Instagram handle and shared two videos from their romantic getaway. Atop one of the videos, she wrote, “Our 2AM version Honest to each other, promises for life, reality. Some meaningful conversations with @rockyj1 and our late-night drive.  Partners for life.” Atop another, Hina penned, “How beautiful is to have someone who adores the things you try to hide, never gives up on you even when you want to give up on yourself. Men like you don’t exist anymore RO. This man is so so sorted in life…I still fall for you.” Here are both the videos, along with the closer look of the messages in the screenshots: 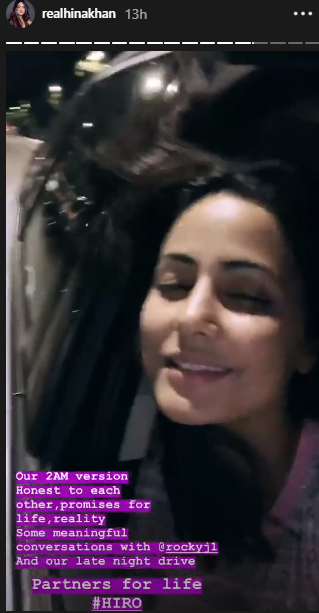 Talking to a leading online portal about her marriage, Hina had once said, “No, not at all. If anything happens, it will be marriage which I've already said won't happen anytime before 3 years. I don't understand why can't they do without making news that includes me. This is nonsense.” Not just that, way back in 2016, when she was asked about her marriage, she had replied, “I am not getting married for the next 3 years for sure.” It seems that Hina Khan has really acquired the expertise of dodging the truth about her personal life over the years. (Also Check: Unseen Video Of Anushka Sharma From Her Vidaai Ceremony Will Make You Want To Get Married Right Away) In a media interaction, she was asked how it felt like when Rocky had proposed her on television. Hina had remarked, “It was kinda sweet surprise for me as well. I wasn't prepared for it and neither was it planned. It just happened. I usually don't talk about my personal life but over there, you become so overwhelmed. The moment I saw him I could not control myself and when he kind of, it was not a proposal, we were in love before as well but the way he said it, I could not hold back and said it back, I love you too. It was sweet. I will always remember and cherish that moment.” Revealing their love story, Rocky had once shared, “We met on the sets of Yeh Rishta Kya Kehlata Hai for the first time where I was the supervising producer and she was playing the lead role. That's how we met. As for what attracted me to her was her dedication to her work. I have seen a lot of actors, but she is one of the smartest of the lot.” He also reverently added, “It is almost unreal if you find a person who's so honest all the time. She calls a spade a spade every single time. And that's the most important thing I love about her. Besides, she is the prettiest woman in the world.” (Checkout: Ekta Kapoor Posts A Heartfelt Birthday Wish For Soul-Sister Smriti Irani On Behalf Of Her And Ravie) 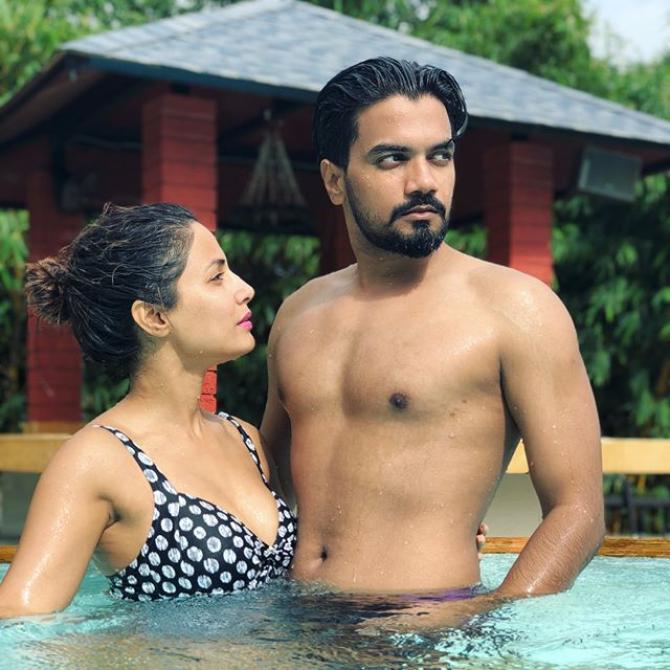 At the recently held Indian Telly Awards 2019, Hina Khan bagged the Best Actress in Negative Role for Kasautii Zindagii Kay 2 and when she was quizzed about leaving the show, Hina had said, “As far as the show is concerned, I am looking forward to come back. I am taking a four months to break, I have a couple of films to shoot but tab situation kya rehti hai uspar bhi depend karta hai. How the show is doing, whether I am required or not, maybe I pick up a new show, or I might continue with another show and Kasautii, so it’s not that I am exiting the show, aisa kuch nahi hai.” (Don't Miss: Sania Mirza's Son Izhaan Mirza Malik Dressed In All-White Kurta Pyjama For Jumma, Picture Inside) 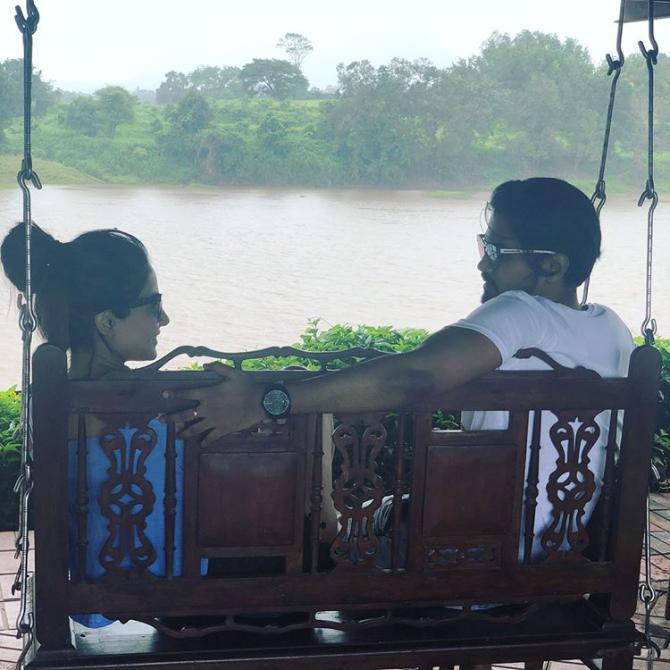 Here's wishing Hina and Rocky all the happiness in this world. Guys, your fans want to see you both getting married soon!