Rubina Dilaik and Abhinav Shukla completed nine months of togetherness on March 21, 2019. On the occasion, she shared a video singing a song to Abhinav and got trolled for the same.

Choti Bahu–Sindoor Bin Suhagan, Punar Vivah-Ek Nayi Umeed, Sasural Simar Ka and Ek Shringaar Swahbhiman actress, Rubina Dilaik walked down the aisle with her long-time actor-boyfriend, Abhinav Shukla on June 21, 2018, in Shimla. The lovebirds took the nuptial plunge at the heritage Woodville Palace. And it was a 3-day-long affair, which kick-started with the mehendi and sangeet ceremony on June 19, 2018.

Do you remember Rubina had gifted something precious to Abhinav as her wedding gift for him? Well, for the ones who don’t know, the Shakti Astiva Ke Ehsaas Ki actress had created a music video for her hubby that had an original song sung by her. Rubina had then shared with SpotboyE, “It all began 3-4 months back jab hamari shaadi ki date finalise hui thi. Main tabse soch rahi thi ki wedding gift kya doongi main Abhinav ko? I wanted to give him something immaterial. And I had been learning a bit of music, as and when mujhe apni shooting se time milta tha. So, I thought – what if I gift him a song?” (You May Also Like: When Amitabh Bachchan Was Trolled For Discriminating Between His 'Beti' Shweta And 'Bahu' Aishwarya) 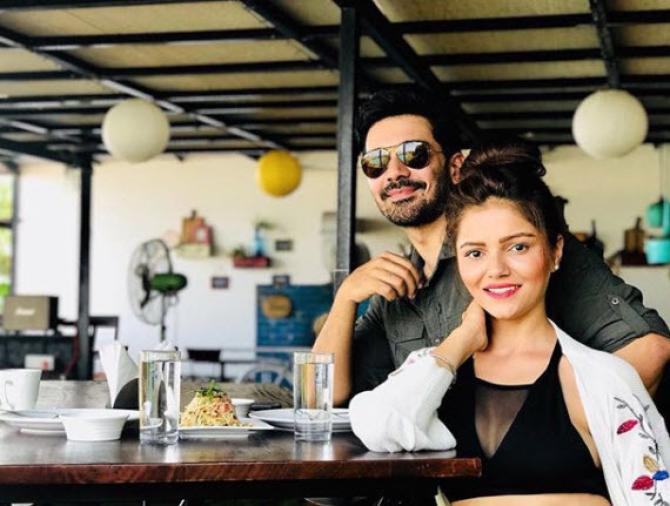 She had further added, “Beech beech main I would write 4-5 lines ka poem for him. Just as and when, to just surprise him. I would text these lines to him. I’m pretty good at poetry and prose. I had a few lines with me, that I had penned as a poem for him and I thought why not translate them into a song? And maybe if it goes per plan, I thought I could gift it to him on our wedding”. Rubina also revealed that Abhinav had no idea that she was doing this. She opened up to the media portal and added, “On our sangeet in Shimla (I gave him the gift), sabhi dance kar rahe the, and everybody expected me to dance as well. That’s when I played out the song. I wanted to gift him something unexpected. We played the song on the AV monitor”. (Do Check: Aamir Khan Shares An Adorable Picture With His 'Baiko', Kiran Rao, Calls Her 'Cutest In The World')

Recently, on March 21, 2019, Rubina and Abhinav completed nine months of their marital bliss. On this special occasion, the doting and loving wifey took to her official Instagram handle and shared a video singing the same song to her hubby, Abhinav. In the video, we can see Rubina singing the song and capturing Abhinav on and off, who can be seen enacting like a puppy. Here’s the video that Rubina shared:

Soon after this, contrary to the expectations, the Instagram users started judging her on her singing skills. Rubina Dilaik took to her official Instagram handle and lashed back at the haters who trolled her for her singing skills. Posting the below picture, Rubina captioned the post as, “There are many such Amazing people who have so much if TIME and ENERGY to hate and belittle #troll #alarm the reason.” (Also Checkout: Most Expensive Divorces Of Bollywood That Made Celeb Husbands Almost Bankrupt)

She had further added, “I call them Amazing is coz I AM AMAZED reading their comments and wonder why waste such precious time FOLLOWING SOMEONE you don’t Like or Even Know about their Journey as a Public Figure! My 2 cents: - Please Save and utilise your time and Energy for better n bigger things in life, our time is very Limited here. PS: - wait and watch “Trolling” over this post also.” Mind-blowing, isn’t it? Checkout the picture of the mean comments she had shared: 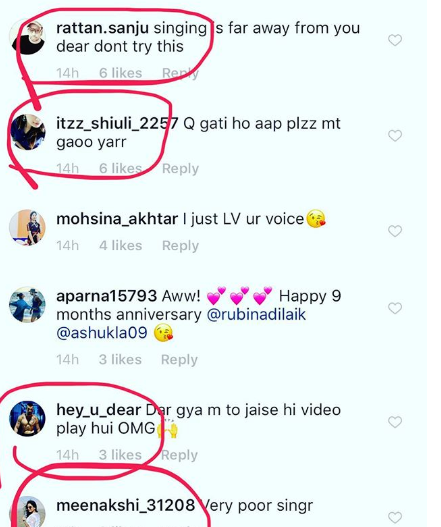 Prior to the saat pheras, Rubina had expressed her feeling on getting married. Talking to an online portal, Rubina had shared, “I am feeling neither nervousness nor excitement, as the preparations for the wedding and my ongoing TV show shoot schedules have left me numb (laughs). Coordinating things is very difficult. I have hardly slept for four to five hours a day in the last one-and-a-half months. Abhinav and I have decided to exchange seven vows after the traditional wedding. I have written mine and I hope he has too”. Revealing what caught his attention, Abhinav had once remarked, “Let me be honest — I checked her out as she looked resplendent in a sari. You generally see girls in western clothes and then you get to see that someone can look so stunning in a saree as well. So I saw her and I was like, wow she’s beautiful.” (Checkout: Ekta Kapoor Posts A Heartfelt Birthday Wish For Soul-Sister Smriti Irani On Behalf Of Her And Ravie) 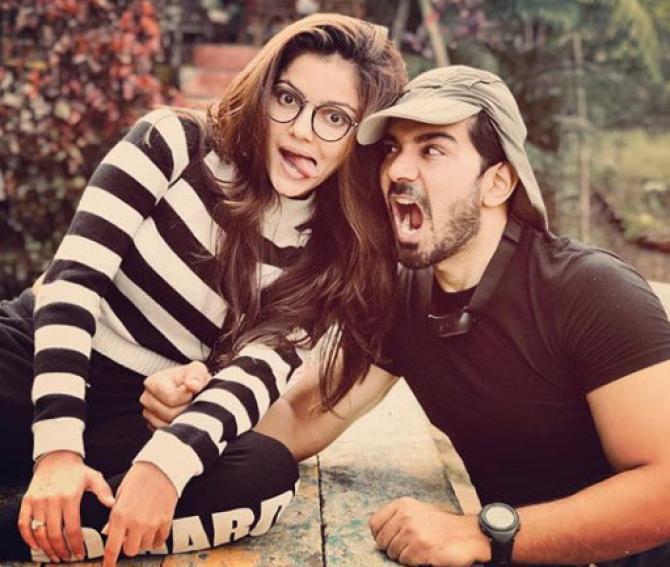 On the other hand, Rubina had once mentioned him as a pandora box. The actress was quoted as saying, “I call him a Pandora box – he is full of surprises. He is so creative that each time, he’ll surprise you with magnificent creations that your interest in human beings just grows. And whenever I see him do something new, I get all the more attracted towards him. I feel blessed that I’m leading my life with a person who knows how to live each and every day preciously.” (Also Read: Sania Mirza's Son Izhaan Mirza Malik Dressed In All-White Kurta Pyjama For Jumma, Picture Inside)

Kudos to you Rubina, what a fab reply, we must say! Wishing you and Abhinav a very happy married life! 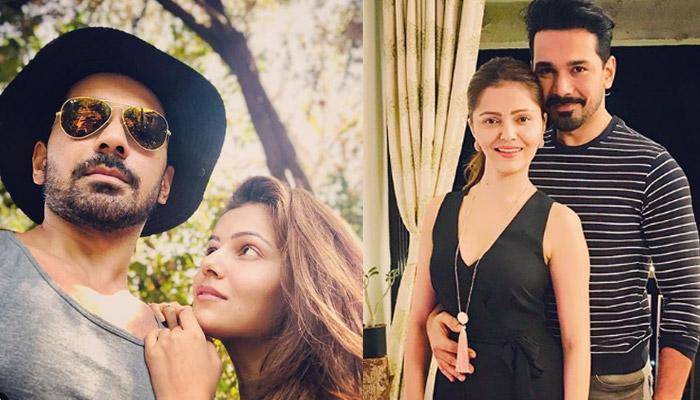