Hema Malini opened up about her experience of becoming 'nani' for the fourth time as her younger daughter, Ahana Deol gave birth to twin girls about a week ago!

There's nothing more joyous in the world than welcoming little munchkins into your life as their laughter and cutesy gimmicks fill the house with happiness. They're the apple of the eye of their grandparents. The grandparents also dote on their little goofballs. Veteran actors, Hema Malini and Dharmendra ji are elated with joy, as their younger daughter, Ahana Deol gave birth to twins, about a week ago! (Recommended Read: Priyanka Chopra And Nick Jonas Celebrate Second Wedding Anniversary, Pen Sweet Notes For Each Other)

Ahana Deol had embraced motherhood for the second time on November 26, 2020, as she had given birth to twin girls. On November 27, 2020, she had announced the happy news on her IG stories and had revealed the name of her newborn daughters. Now, in a conversation with ETimes, Hema Malini opened up about her experience of becoming nani for the fourth time. Scroll down to know it all! 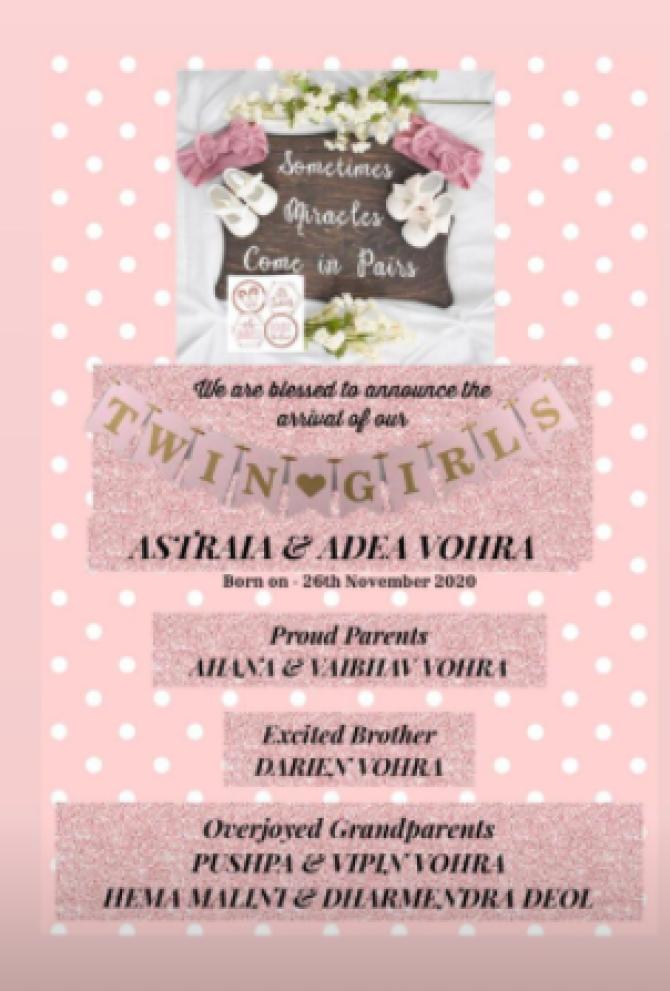 Talking about her daughter, Ahana's delivery, Hema ji said, "It was a very smooth delivery at Hinduja Healthcare Surgical Hospital in Khar (Mumbai). All my five grandchildren have been born in the able hands of Dr Kiran Coelho in that hospital; we have immense faith in her and the hospital. But yes, we had to take extra precautions during Ahana's entire pregnancy because of the COVID wave." 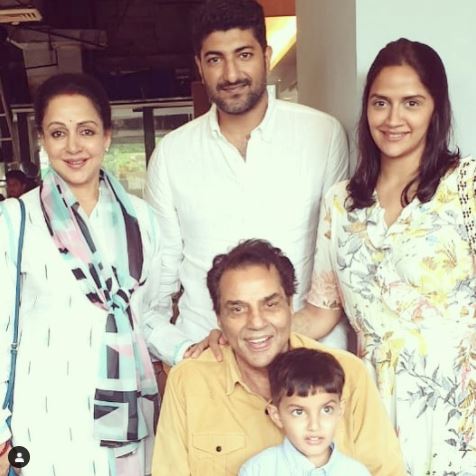 Hema ji further revealed that the newbie mommy is back home now, but Dharmendra ji hasn't yet seen his granddaughters. However, Hema ji reassured that he has seen the pictures of the babies. The actress said, "But of course, he has seen the pictures of Astraia and Adea." Hema ji further said, "Well, Aahana and Vaibhav (Ahana's husband) had pre-decided a few names; some names of boys and some names of girls. We often do that, don't we? And I don't interfere in their choice, neither when it comes to Esha and Bharat. My happiness lies in my family's happiness. Dharam ji may go to see the babies in a day or two at Ahana's Worli house." (Also Read: Aditya Narayan and Shweta Agarwal Twin In White For Their Wedding, The 'Barat' Sets Off Dancing) 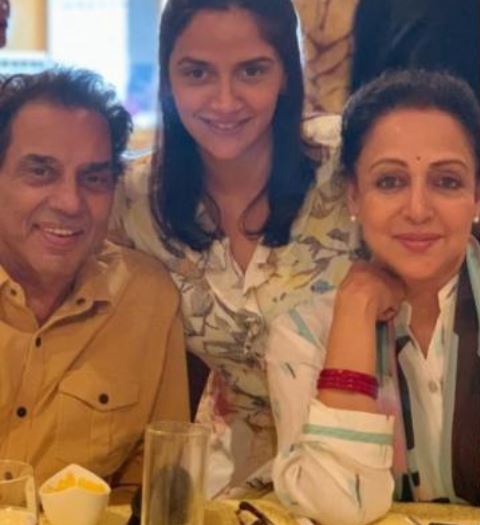 Talking about soaking in the joyous feeling of becoming a grandparent for the fourth time, Hema ji said, "It's such a joyous moment. Dharam ji is very excited. When we fell in love and married, Dharam ji and I never expected that our family would expand so much. Darien resembles both Ahana and Vaibhav, Adrea and Astraia have shades of resemblance to Darien." Hema ji also revealed that not only Dharmendra, but Ahana's in-laws (Vipin and Pushpa Vohra) also have seen the newborns in the pictures only. She said, "Vaibhav's parents had tested positive for COVID, they are fine now. But they are naturally not taking any chances of any travel for some time. Plus they stay in Delhi where the COVID numbers are very high." 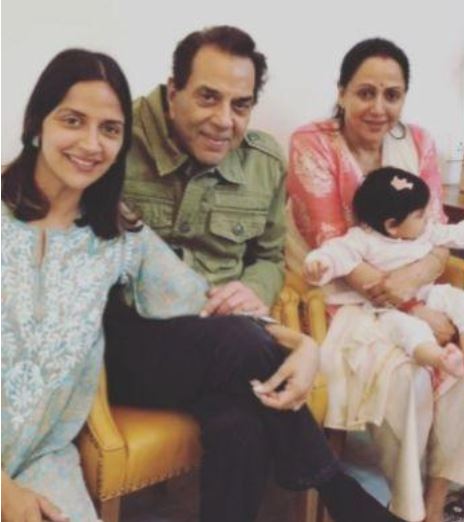 Earlier, in an interview with the SpotboyE, Hema ji had shared how she and her husband, Dharam ji had always prayed to be grandparents, and now they are blessed with five grandchildren. She was quoted as saying, “To have babies in our family after so long is such a blessing. After my daughters, Esha and Ahana were born there was a very long gap when there were no babies around us. When Esha and Ahana grew up, got married and moved out, both, my husband Dharamji and I prayed to be grandparents.” Hema ji had also revealed that her daughter, Ahana and her husband, Vaibhav had always wanted to have twins. Sharing how it is a full house now for the parents, Hema ji had said, “Ahana and her husband Vaibhav wanted to have twins. They had even decided the names for their twin daughters Astraia and Adea. Ahana already has a son who is like cutest. I call him little Krishna. Now there are two little girls, So it’s a full house.” (Don't Miss: Amit Sadh Reveals The Truth Behind His Dating Rumours With Kim Sharma, Makes A Statement)

Well, we're elated with the arrival of twins, Astraia and Adea!