Genelia Deshmukh Gives Us A Glimpse Of How Her Son, Riaan Is Learning New Things Amidst Quarantine

Genelia Deshmukh Gives Us A Glimpse Of How Her Son, Riaan Is Learning New Things Amidst Quarantine

The COVID-19 outbreak has affected children the most as they are locked inside their homes. Recently, Genelia Deshmukh shared with her fans how kids can make the best use of this time! 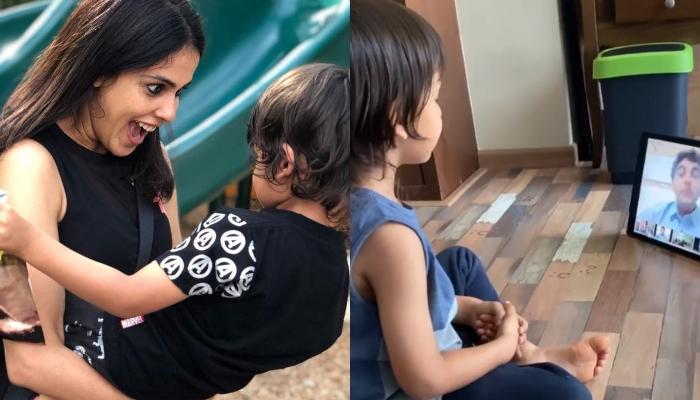 Schools are closed, parks are shut, and no one is allowed to roam on the streets! In these times of lockdown, it is the kids, who are getting affected the most as they have nowhere to go. The COVID-19 outbreak in the world has forced us to stay inside our homes and adapt to the social distancing for staying safe. In these gloomy times, it is important for us to not lose hope and wait for 'the day' as the sun will soon shine upon us. And Bollywood actress, Genelia Deshmukh is making sure that her kids, Riaan Deshmukh and Rahyl Deshmukh don't feel left out. (Recommend Read: Priyanka Chopra Revealed Nick Jonas' Reaction When She Switches Her American Accent To Indian)

Before, we take you further into the story, let us take a look at Genelia Deshmukh and Ritesh Deshmukh's journey so far. Genelia and Riteish are hailed as one of the most romantic couples of the Tinseltown. They had gotten married in the year 2012 and now, they are sharing the parenting duties in bringing up their two dashing baby boys, Riaan and Rahyl. Genelia has gained millions of fans with her actings stints on the silver screen and had left the world of glam and glitz for nurturing her kids and she has no regrets for it. In many interviews, the actress had stated that motherhood is the most rewarding gift she ever got. 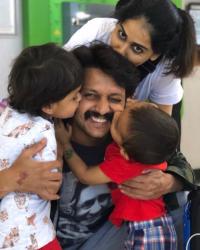 On April 23, 2020, Genelia took to her Instagram handle and shared a video of her son, Riaan attending an online learning session. In the video, he was seen cutely repeating the words taught by his teacher. Alongside it, the actress wrote a sweet caption stating the importance of this time and it can be read as "So our kids are currently living in a world where distance learning - is the new way of education. At first, I thought, my whole world would come crashing down and that this concept would never ever work but that’s not what my kids feel, they accept and adapt to every situation with such ease. All they need is a little love and time from their parents and they are just fine. So be there for them because learning together is better than learning alone." Take a look at it below:

On Riaan's birthday, Genelia had penned a beautiful note which perfectly describes the unsaid emotions of every mother for her 'first-born'. The actress' note could be read as "Dearest Riaan! Every parent says “I don’t want him to grow up, I want to freeze this age forever”. But I don’t. I want to enjoy every year of yours, I want to see you grow into a fine young man, I want to give you wings to fly and I’d like to be the wind beneath those wings. I want to tell you that life is tough but you are tougher, I want you to always believe in yourself no matter what happens cause I will always believe in you. Apart from everything I want and I wish for you, the one thing I never want to fail to let you know, is that I love you so so so much and you are the greatest thing that happened to me. There is nothing I’d rather see than your smile and nothing I’d rather hear than your laughter. For all the things my hands have held, the best by far is you. Happy Birthday to the little boy who made me a Mom- My First Born", followed by a heart emoji. (Also Read: Arjun Kapoor Trolls Kareena Kapoor Khan's Hubby, Saif Ali Khan After She Advises Him To Stay Home) 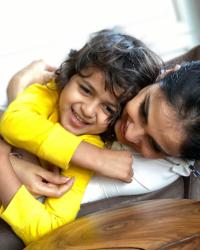 In a throwback interview with TellyChakkar, Genelia had talked about embracing motherhood and the perks of it. She had shared, "Oh yes absolutely. Riaan is just three months old now and this is the time when he needs me the most. So I have to be around him most times and I am absolutely loving it. Becoming a mother is the most rewarding thing. It makes you realise the things that your mother did for you. It makes you thank your own mother." (Don't Miss: Ram Charan's Wife, Upasana Kamineni Looks Gorgeous In An Unseen Picture From Their Mehendi Ceremony)

Well, we love the way Genelia is acing her role as a super mommy!