Gauahar Khan shared an adorable picture with her fiancé, Zaid Darbar from their Dubai diaries and we couldn’t stop drooling over their camaraderie. Love is the purest emotion and there is nothing as beautiful as falling for someone, who loves you immensely. And when it is about a celebrity, then their love life is always under media scrutiny. From their dating to break up, netizens love to know every tiny detail of their favourite celebrity's love life. And one celebrity, whose relationship status is hitting the headlines these days is Gauahar Khan. Gauahar is painting the town red with her fiancé, Zaid Darbar and we love seeing their adorable PDAs through their social media handles. (Also Read: Bigg Boss 14: Kavita Kaushik's Husband Talks About Aly Goni's Threatening Behaviour Towards His Wife)

It was in August 2020 when actress, Gauahar Khan, whose relationship with music composer, Ismail Darbar’s son, Zaid Darbar had started hitting the headlines. And in November 2020, the two had announced their engagement and had made their relationship official. On November 9, 2020, Gauahar had taken to her IG handle and had shared adorable pictures with Zaid. The duo had looked like a match-made-in-heaven. Along with the pictures, Gauahar had wished her fans for Diwali on her and Zaid’s behalf and had written, “Mere tumhare sab ke liye happppppy Diwali!!!!! From US to alllllll of you! @zaid_darbar. This is my fave Diwali Bollywood song, which ones yours???? #gaza #HappyDiwali #BeSafe #Spreadlove.”

Gauahar and Zaid were vacationing in Dubai and had enjoyed every moment with each other. One look at their pictures make us drool over their camaraderie. On November 25, 2020, Gauahar took to her IG handle and shared a stunning picture with her man, Zaid. Gauahar looked stunning in a black sleeveless top and white pants. On the other hand, Zaid looked handsome in a striped shirt and black pants. Along with the adorable picture, Gauahar wrote, “It’s in your eyes, I’ve been watching you lately… hahahahahha! #Apt #US ... I obviously take amazing selfies… @zaid_darbar.”

On November 5, 2020, Gauahar had confirmed her relationship status with Zaid Darbar. She had taken to her Instagram handle and had shared a mushy picture with her beau, Zaid. In the picture, we could see the duo posing with 'she said yes' balloons. The two were dressed in ethnic ensembles and were looking super cute together. Alongside it, Gauahar had tagged Zaid and had added a ring and a heart emojis. Zaid had shared the same post and on it, Gauahar's sister, Nigaar had commented, "Masha Allah my jaanejigars... may Allah shower all his blessings upon you both always ameen." (Also Read: Dimpy Ganguly Captures Her Daughter, Reanna's Excitement As Her 'Daadu' Surprises Her [Video])

Gauahar is also loved by Zaid’s family and a proof of the same was seen on Gauhar’s birthday party as her future mother-in-law had turned up for the celebrations. On November 6, 2020, Gauahar's future mom-in-law, Farzana had taken to her Instagram handle and had penned a lovely note for her daughter-in-law. Farzana had shared a couple of pictures from Gauahar's birthday. Alongside it, she had written, "Welcome to our Family. Also congratulations to you too @zaid_darbar @gauaharkhan. All my blessings, love & support is always with you. Stay happy."

In an interview with the India Today, Zaid Darbar’s father, Ismail Darbar had reacted on the December wedding reports of his son and Gauahar Khan. He was quoted as saying, "Since I am a father, it is obvious that I would bring a daughter-in-law too. Gone are those days when parents would look for a daughter-in-law, now our children just say ‘daddy, I like this girl,’ and we have to listen to them and support their choice. So, I don’t have any problem with my son and daughter-in-law. My children aren’t that much open with me. If Zaid comes and tells me that he wants to get married, then I will get them married." (Also Read: Yash And Radhika Pandit's Son, Yatharv Is A Carbon Copy Of His Mother, She Proves It With A Collage) 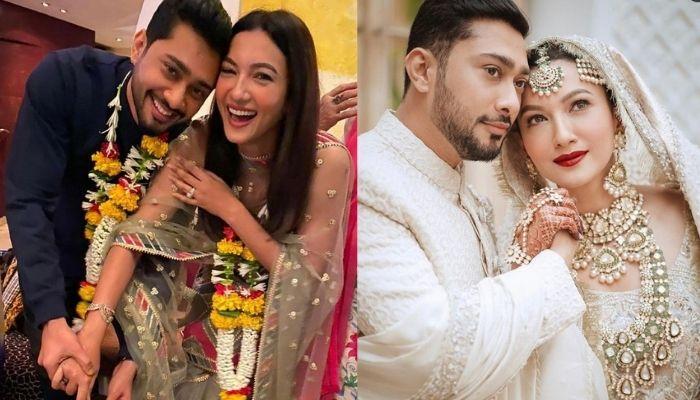