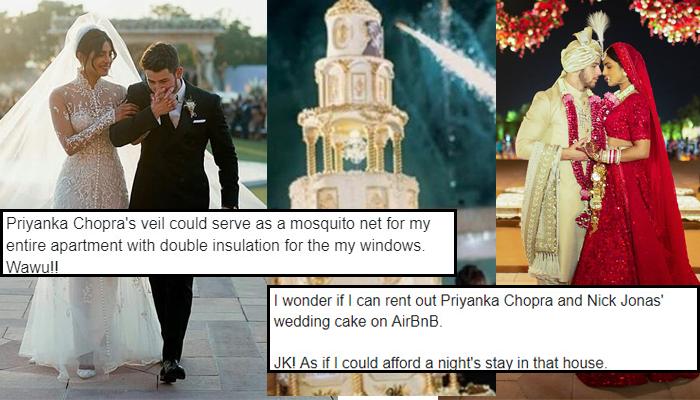 As soon as Nickyanka’s wedding pictures and videos surfaced online, social media went crazy. Likes and retweets followed, and yes of course, soon the memes took over and everyone went ROFL! Undeniably, Priyanka and Nick’s wedding was grand, to the point that PeeCee’s white wedding outfit had a 75-feet-long veil, and their wedding cake was abnormally 18 feet tall. Netizens soon started making memes on these two. Check out a few here: 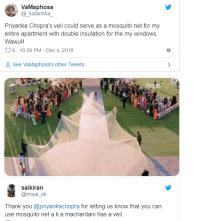 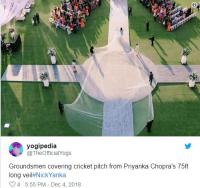 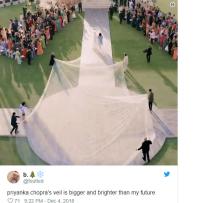 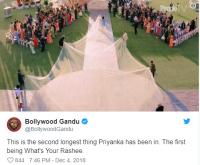 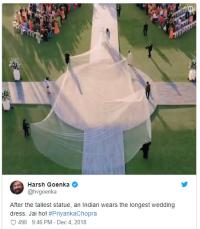 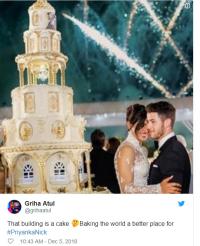 Could you contain your laughter? We can bet no! Speaking of the veil, for her western wedding, Priyanka sported a Ralph Lauren gown with floral and scroll motifs and lace-effect tulle appliqués with scalloped sleeves and a high-neck collar. The hand-beaded and hand-embroidered gown also included mother of pearl pailettes, crystal seed beads, and Swarovski crystals - which took a total of 1,826 hours to complete. In a video which has now gone viral on social media, we can see Priyanka walking down the aisle followed by four bridesmen taking care of her 75-feet-long veil behind her gown. Take a look:

Priyanka informed Hello magazine about her white wedding outfit and said, "For the western wedding, we had been talking to a bunch of incredible designers. But ultimately when Ralph Lauren approached us (they're so much a part of our love story for obvious reasons) and I learned that Ralph has only designed three wedding dresses in 50 years - one for his daughter, his daughter in law, and his niece - I was blown. Then when we went in for the sketch presentation, they created exactly what I envisioned for myself on my wedding day... and I said yes to the dress.” 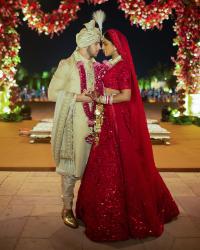 Coming back to Nickyanka’s wedding cake, as per an earlier Filmfare report, Nick had asked chefs from Dubai and Kuwait to prepare their wedding cuisine. Chef Karan Bakshi informed a media house that special instructions were given to learn and prepare Marwaad's authentic food. The chefs were also asked to prepare an 18-feet (6-tier) wedding cake for Priyanka and Nick! (Suggested Read: Kapil And Ginni Choose An Iconic Shop For Their Wedding Sweet Boxes, Guess What's Inside Them?)

Now that Priyanka and Nick’s wedding is done, their fans are waiting for Mumbai reception and Nickyanka’s honeymoon. About the same, a source close to the couple informed DNA, “The team will take a short break during Christmas. That’s when Nickyanka will fly to an exotic location for their honeymoon. PC will leave the country around December 27 and return in the first week of January.” 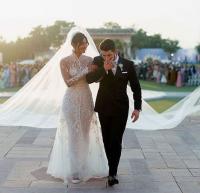 The source further added, “Once she comes back, Priyanka will begin the Ahmedabad schedule for her next. After she has completed all her work commitments, she and Nick will take off for another trip, albeit a longer one this time.” And the report further suggests, “Priyanka has a few ad campaigns lined up, which she needs to shoot for in the coming week. Post that, the couple will throw a bash for the film industry either on December 15 or 16.”

In an interview with People magazine, Priyanka opened up about the most emotional moment from her wedding while she was walking down the aisle and said, "It was all tears. All tears. I could not hold it in. I think I was nervous and scared. But as soon as the curtains opened, and I saw his face it was just like everything settled and I knew I was making the best decision of my life.” (You May Like: Arjun Kapoor Calms Sister Anshula Kapoor As She Remembers Their Mom Mona Shourie In A Heartfelt Post)

How did you like memes on Priyanka’s 75-feet-long gown veil and her 18-feet-tall wedding cake? Share your comments below.