'Force 2' actor, Freddy Daruwala and Crystal Variava were blessed with a baby boy on February 03, 2019. Freddy has now shared the first picture of his newborn and has also revealed his name. Whenever we get to hear about a couple dating or making plans for their marriage, we are shot up to the cloud nine. And when the D-day arrives, we are constantly glued to our mobile screens for their wedding pictures and videos. And after they take the nuptial plunge, their fans eagerly wait for a little munchkin to arrive and when he/she does, our joy knows no bounds. Force 2 fame actor, Freddy Daruwala has shared a similar joy with his fans. (Suggested Read: Aamir Khan's Daughter, Ira Khan Confirms Being In A Relationship With The Musician Mishaal Kirpalani)

Freddy Daruwala has been married to Crystal Variava for the past 6 years and self-admittedly, he prefers not to talk about his wife and family. It must be mentioned here that more than his wedding with Crystal, it was his alleged relationship with TV superstar, Krystle D'Souza which was under the media radar recently. 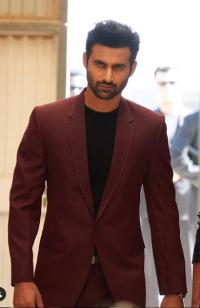 Freddy Daruwala and Crystal Variava were blessed with a baby boy on February 03, 2019. And Freddy has now shared the first picture of his newborn whom they have adorably named, Evaan. Bollywood photojournalist, Viral Bhayani shared little Evaan's first pic on his Instagram handle. Take a look: 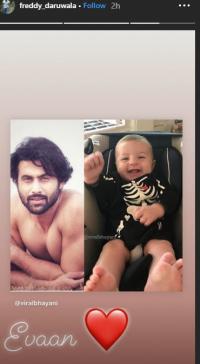 Check out another picture of baby Evaan: 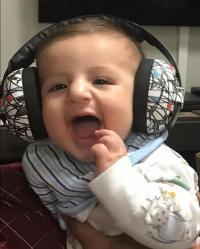 Earlier, after the birth of Evaan, Freddy had confirmed about the same in a statement, which could be read as, “My wife and I have been blessed with a healthy baby boy. Since he is our first child, we are really excited. We are looking forward to spending our lives with him. He is our bundle of joy." Freddy Daruwala had also shared with another media portal that he and his wife want to keep their son's life private and not get his pictures released in public. Talking about the same, Freddy had told ETimes, "Some would say that I’m an overprotective dad, but I think I’m a conscious one. At this stage in Evaan’s life, we choose everything for him- from the brand of diapers to his sleeping schedule. That’s because we want to ensure that he’s safe, happy and protected. My wife, Crystal, and I didn’t want our son’s pictures to become public. We made a conscious choice to protect his privacy and keep him away from all the unnecessary attention soon after birth.” (Don't Miss: Dipika Kakar Bakes Delicious Keto Chocolate Chip Cookies For Hubby Shoaib Ibrahim And Family) 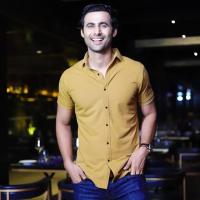 Speaking about his family life along the similar lines, he had stated, "My family prefers leading a normal life. You won’t find their photos online nor do I share them on social media. My mother still goes out for grocery shopping and bargains with the seller. To keep them away from public attention, I make sure that I don’t speak much about them. If they get recognised, they have to follow a certain lifestyle, and they aren’t ready for it."

Talking about his marriage with Crystal, he had once shared, "It’s not that I deny that I am married, but I don’t want to talk about what’s going on in my personal [married] life. I’d rather talk about my work." He had further talked about their future children and had shared, “I don’t want my kids to grow up on the basis that they are born to a film star. They must lead a life away from all the attention. They should be able to make a name for themselves.” 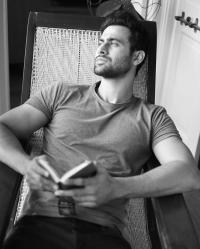 Freddy had also once talked about his idea of public scrutiny on the celebrities and was quoted as saying, "As actors, our life is already very much in the public eye. I feel that this is the only part of your life that is something that you can hold onto yourself and let no intruder invade the privacy. I am not against talking about relationships. But once you start talking about it, the whole focus, whole attention becomes about the relationship and it is all that is majorly spoken about. I want people to talk about my work and know me more for my work. But yes, I am very proud of the relationships and women I have been with.” 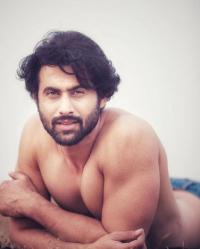 Freddy Daruwala was allegedly linked up with Krystle D'Souza recently by a fan. Krystle, in a witty tweet, had refuted such rumours, "Wow! Never even met this person [Freddy Daruwala] in my life and I am apparently dating and have some ‘growing PDA at private parties’ with him? I don’t know to laugh or be upset about baseless news like these! Also, you might be looking for ‘crystal’ and I might be looking forward to an apology." (You May Like: Kangana Ranaut's Sister, Rangoli Shares Hrithik Roshan's Sister, Sunaina Has Been Calling Them)

Freddy Daruwala and Crystal Variava's baby boy is too cute to miss, right? Share your views!