Farhan Akhtar Shares A Throwback Pic With Zoya Akhtar And Their Cousins, Will Make You Nostalgic

Farhan Akhtar Shares A Throwback Pic With Zoya Akhtar And Their Cousins, Will Make You Nostalgic

Farhan Akhtar has shared a throwback picture which is sure to make you nostalgic. In the post, we can spot the baby Farhan Akhtar and Zoya Akhtar with Kabir Akhtar and Nishat Akhtar. 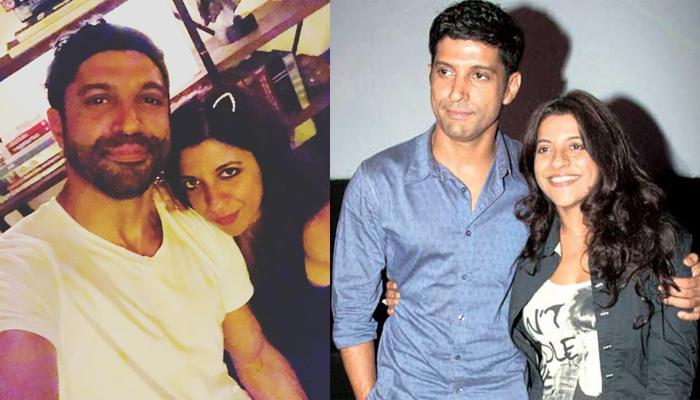 Bollywood is undoubtedly a dynastic kingdom and it is filled with many reputed families who have inspired us time and again with their varied contributions to the Hindi film industry. One such prominent family of Bollywood is the Akhtar family. Coming from the lineage of legendary Javed Akhtar, the family boasts of many talents including the experimental director, Zoya Akhtar and her super-handsome actor-brother, Farhan Akhtar. (Suggested Read: Priyanka Chopra Jonas And Nick Jonas Join Sophie Turner And Joe Jonas For A Lunch Date In Paris)

To give you a little background, the sibling duo- Farhan and Zoya, were born to Javed Akhtar and his first wife, Honey Irani. Farhan and Zoya together make for one of the most prolific sibling duos of Bollywood. The two have always spoken reverently about each other, and have even collaborated on three films together- Luck By Chance, Zindagi Na Milegi Dobara and Dil Dhadakne Do.

Farhan Akhtar took to his Instagram handle yesterday on June 23, 2019, to share a throwback picture which is sure to make you nostalgic. In the post, we can spot the baby Farhan Akhtar and Zoya Akhtar, along with their cousins, Kabir Akhtar and Nishat Akhtar. Farhan has captioned the picture as, "Seems this picture of us cousins were taken before wide angle lenses were invented. @zoieakhtar @kabirakhtar @nishat."

Zoya Akhtar and Farhan Akhtar share an amazing brother-sister bond with each other. Talking to the official Humans of Bombay page once, Zoya had opened up about her equation with her sibling, Farhan. She had revealed, "Pieces of my life, no matter how scattered, are being stitched together and reflect in my work. The biggest piece is my family -- from watching films like The Godfather on our dining room wall to having a great relationship with my sibling. Or going on weekend trips with our cousins to the beach and eating all day… it’s been a crazy childhood; a ‘bohemian one'."

The Gully Boy director had further added, "My love for the arts started at home -- most of the people we met were artists- actors, directors, musicians, writers. The conversations my parents had about films were obviously more in-depth than the average audience. Screenplay, performances, lighting, shot-taking. And before you know my brother and I were looking at films slightly differently." (Must Read: Vivan Bhathena's Daughter, Nivaya's Yawning And Sleepy Monday Morning Is Basically All Of Us [VIDEO])

Farhan Akhtar and Zoya Akhtar had once appeared on Koffee with Karan season 3 in 2011. Talking about the same, a source had told the Mid-Day then, "This is the first time that the two have revealed family secrets. KJo has sensitively brought out intimate details they would never have revealed with anyone else. When asked who was responsible for the great equation they share with Shabana today, both admit that their mom Honey Irani and Azmi together contributed to that."

Zoya Akhtar, in an interview with SpotboyE, was asked as to how close she is with her brother, Farhan Akhtar. She had replied, "Very close. Our professional and personal lives are separate, but I am very close to him."

She was also asked about her personal life and why she isn't married yet. To this, the 46-year-old director had responded by saying, "I believe there is no one size that fits all. If being married makes you happy, then more power to you. And if being single makes you happy, then please continue being single. Nobody should be doing anything simply because he/she is supposed to do that."

Farhan Akhtar, on the other hand, was earlier married to Adhuna Bhabhani for 17 years, from 2000 to 2017. They got legally divorced a couple of years ago and currently, Farhan is dating model, VJ and actress, Shibani Dandekar. (You May Like: Nusrat Jahan And Nikhil Jain's Wedding Teaser With 'Laal Ishq' Playing In Background Is Pure Love)