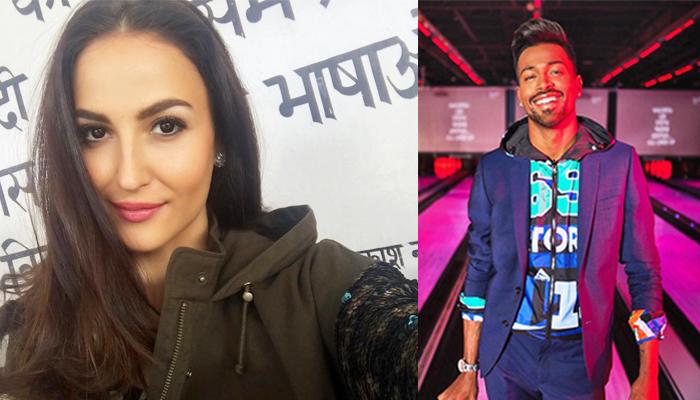 Bollywood and cricket are two of the most glamorous industries in India. And after Anushka Sharma and Virat Kohli, it seems that another Bollywood-meets-cricket-affair is in its budding stage.

Rumours of handsome all-rounder Indian cricketer, Hardik Pandya dating Rustom actress, Esha Gupta is doing the rounds on entertainment portals. As per the latest information, Esha Gupta is dating Hardik Pandya. Reportedly, what started as a mere chat ended up in an instant strong connection and now they are dating!

The source further added, “Right now, both of them are hush-hush about their budding romance. They want to see how things turn out. They make their lunch and dinner plans secretively and want to avoid the public glare. Currently, they are in the phase where they are getting to know each other”. (Don't Miss: Janhvi Kapoor Trolled For Her Dress, Arjun Kapoor Slams A Media House For Giving Attention To Trolls)

Earlier, Hardika Pandya was rumoured to be dating actress, Elli AvrRam. However, now there seems to be some sort of discord between the two and reportedly they have already broken up. The reason behind Hardik Pandya and Elli AvrRam’s break up was commitment issues. Elli wanted a commitment from Hardik and the latter wanted to keep it casual. The source informed, “Elli wanted a commitment, while Hardik was looking for something casual. This led to a lot of arguments between them and they called it quits”.

For those of you who do not know, rumours of Hardik Pandya dating Elli AvrRam started when Elli attended Hardik’s brother, Krunal Pandya’s wedding last year. Since then, two have often been spotted together at various events and ad shoots.

Hardik Pandya and Elli AvrRam were recently spotted outside Aalim Hakim's salon in Bandra where Elli often goes for her hair and make-up. While Hardik posed for the shutterbugs openly, Elli came out of the salon and headed straight to her car. She shied away from getting clicked even at the Mumbai airport where she had gone to see off Hardik when he was leaving for South Africa for his cricket commitments.

But now, it seems that Hardik Pandya and Elli AvrRam are not together anymore, and Esha Gupta has bowled Hardik. It must be noted here that recently, rumours were abuzz with the news of something brewing between Hardika Pandya and Urvashi Rautela as well. (Suggested Read: 'Naagin 3' Fame Actress Surbhi Jyoti Is Probably In Love And Dating A Famous Actor)

A birdie informed SpotboyE recently that, in a bash, Urvashi was deeply engrossed in a conversation with Hardik. Urvashi met the men in blue at industrialist Gautam Singhania’s party at his Breach Candy residence. Reports suggest that they were even flirtatious with each other and after a point got oblivious to the world around them.

Well, not much is known about Hardik and Urvashi’s fling but we all know that the cricketer was definitely dating Elli, and now if reports are to be believed then Elli and Hardik have parted ways. The recent development suggests that Esha Gupta is dating Hardik Pandya now.

Next Read: Divyanka Tripathi Dahiya Slams The Troll Who Questioned Her Hubby Vivek Dahiya's Love For Her