Christmas has set in early for the Takhtani family as Esha Deol shared many glimpses of the celebrations that have already begun in the family. A recent picture shared by Esha with Radhya is adorable! 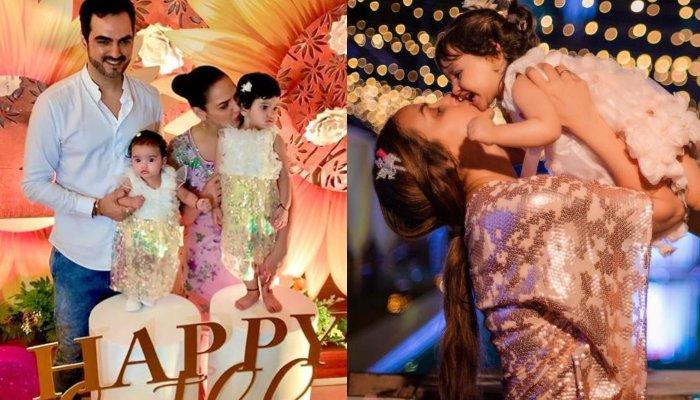 Daughters are one of the most beautiful creatures gifted by God to a couple! Not only can you dress them in the cutest laces, but the new trend of mommy-daughter twinning always makes us go all 'wow'! In fact, kids are happiness in disguise and their mere presence has the capability to brighten a dull day! Esha Deol and her hubby, Bharat Takhtani got twice as lucky after they were blessed with two beautiful daughters in alternate years. The Takhtanis are now a happy family of four and every picture or update about the awesome-foursome makes our day! (Do Read: Sunny Leone And Daughter, Nisha's Latest 'Mother-Daughter' Moment Is Too Adorable To Miss)

Esha Deol got married to her childhood friend-turned-lover, Bharat Takhtani on June 29, 2012. 5 years later, i.e., on October 20, 2017, the duo was blessed with a baby girl, whom they lovingly named 'Radhya' and two years later, Esha and Bharat welcomed their second dollop of happiness, another baby girl, Miraya, in  2019. Esha shared their first-ever family picture on October 20, 2019, on the account of her elder daughter, Radhya's second birthday. Sharing the picture, she had captioned it as "Radhya’s birthday party a big thank you to all my friends & family for spending this special day with us! And thank you to everyone for the loving birthday wishes & blessings for our baby Radhya! @bharattakhtani3 #radhyatakhtani #mirayatakhtani #decorby @thedramaqueen2012." 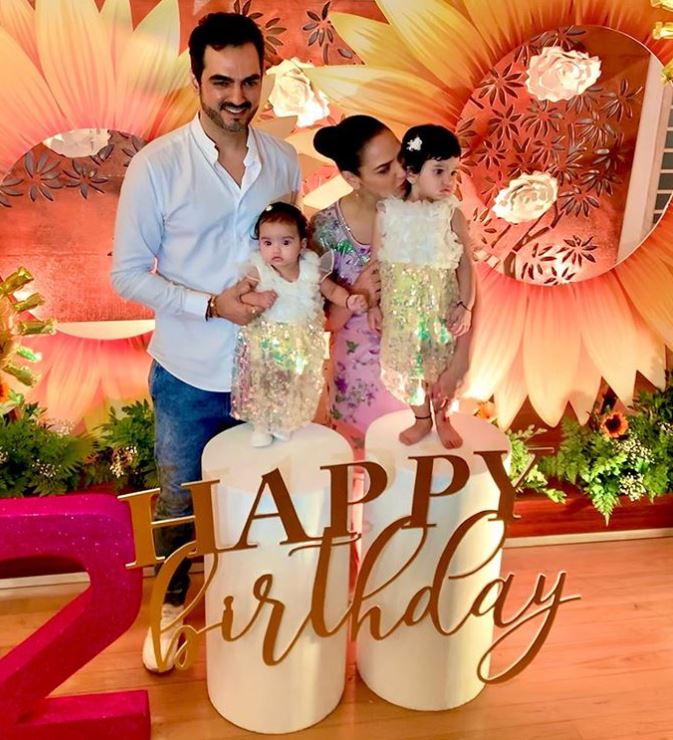 Though many of you might hate the cold but we love December because Christmas comes the soonest and we can spend the entire month, snoozing underneath our blankets and watching Christmas films! Quite like many, Christmas has set in early for the Takhtani family for Esha has shared many instances of the celebrations that have already begun in the family. A recent picture shared by Esha had little Radhya perch peacefully on her mommy's arms as they posed for the camera. Esha looked beautiful in a black dress with a high-puff ponytail, while Radhya looked adorable in a chequered blue and white dress and two fountain ponies. She captioned the picture as "#december #mood with my baby #radhyatakhtani." Also checkout another picture from their outing: 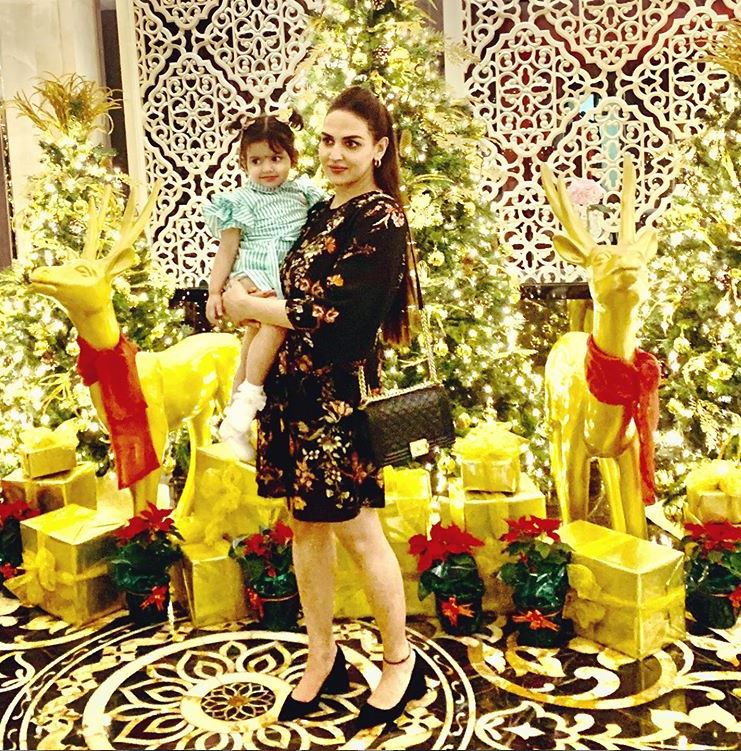 A day prior to this post (December 05, 2019), Esha Deol had taken to Instagram and had shared a sneak peek of their Christmas tree, which they had decorated with lots of help from little Radhya! In the picture, Radhya was seen gazing at the beautifully decorated tree with a teddy in her hand. Sharing the picture, the doting mommy had written, "#christmastree at our home. This time was more fun as Radhya helped us decorate the tree #tistheseason #radhyatakhtani #mirayatakhtani @bharattakhtani3 #itsthemostwonderfultimeoftheyear #december." One of her previous posts also had customised Christmas outfits for Esha and Bharat's little wonders, Radhya and Miraya. (Must Read: Juhi Parmar's Daughter, Samairra And Her Maasi, Aashka Goradia's Pole Dance Is Amazing Beyond Words) 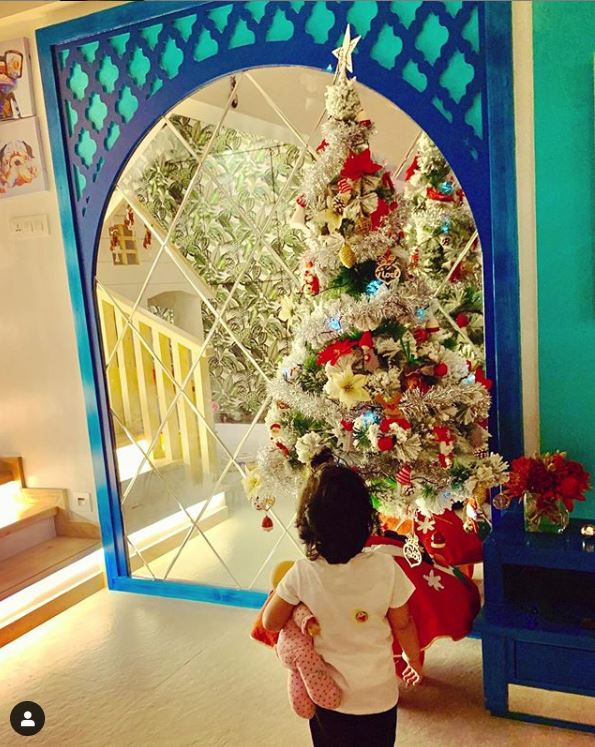 On June 29, 2019, Esha Deol and Bharat Takhtani had completed 7 years of their marital bliss. For the same, Radhya and Miraya's anniversary gift for their star parents must have surely made their day! Esha had taken to her Instagram story and had posted an adorable picture of the gift that her two teeny-weeny daughters, Radhya and Miraya had gifted them. Esha had shared a picture of beautiful peach and a red rose bouquet with a note that could be read as "Darling Amma & Dadda, Happy anniversary! Love, hugs and kisses, Radhya and Miraya." 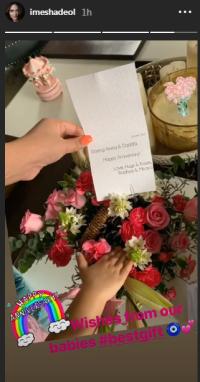 In the first interview post Miraya Takhtani’s birth, Esha Deol's husband and proud father, Bharat Takhtani had talked about the resemblance of their two angels. In an interview with the Mid-Day, Bharat had said, "I am a happy and proud father. Miraya looks like Esha, and Radhya looks like me. So, I am glad that we have babies who resemble us." Esha Deol too had shared the excitement on welcoming their little angel, Miraya Takhtani. She had stated, “Bharat and I are extremely happy and blessed. It's wonderful to have another girl in the family. Bharat is one lucky [guy] who will be surrounded by three beautiful women, all his life. Miraya and Radhya will complement each other.” 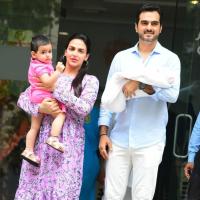 Post-Radhya Takhtani’s birth, commenting on embracing motherhood, Esha Deol had shared in an interview with the India Today, “Mamma loved doing things for Ahana and me, and today I understand that sense of joy when I dote and fuss over my little one. It is something that makes you feel complete as a mother. Beautiful Radhya fills up my days and nights. Both Bharat and I are extremely fortunate to be blessed with her in our lives. Radhya is bubbly and always smiling. Sometimes she does mischievous things that instantly bring back memories of my own antics as a child.” (Also Read: Taimur Ali Khan And Inaaya Naumi Kemmu's 'Up And Up Away' Moment On The Swings Is A Visual Treat) Guys, doesn't Esha's picture with Radhya give us all major Christmas jitters? Keep us posted!