Whenever it comes to Bollywood celeb babies, even their star parents pale in their comparison. Joining the list of famous celeb babies is none other than Esha Deol and Bharat Takhtani’s daughter, Radhya Takhtani. The day Esha shared the first picture of her darling six-month-old daughter, Radhya, her fans couldn’t stop talking about the close resemblance between the mother and daughter. (Also Read: Esha Deol Shares The First Full Picture Of Her Six-Month-Old Daughter, Radhya Takhtani)

Esha Deol and Bharat Takhtani welcomed their first child, little munchkin Radhya on October 20, 2017. The couple kept their daughter guarded against the prying eyes of media and fans till May 7, 2018, when Esha shared Radhya’s first full photograph on her Instagram handle. On May 13, 2018, newbie mommy Esha celebrated her first Mother’s Day and her elated hubby shared pictures from the celebrations on his Insta account. Bharat Takhtani shared pictures of Esha and Radhya with a group of mommies and their kids celebrating Mother’s Day. Bharat captioned the picture as, “Esha’s 1st Mother’s Day with all the mommies and babies in the house!!! #radhyatakhtani” Radhya and Esha are twinning in their Mother’s Day outfits but Radhya stole the show with the cute bow headband. (Also Read: Bharat Takhtani Shares The First Family Picture With Wife, Esha Deol And Daughter, Radhya Takhtani) Speaking to India Today earlier, Esha shared that this Mother’s Day will be special for her as it will be her first after becoming a mother. Esha was quoted as saying, “This is going to be my first Mother's Day after I became a mother. Radhya, my little one, makes me feel special every moment of my life and I am thankful to her. It is a feeling that cannot be described in words. Every year, I buy a gift on Mother's Day for my mother. This year, I hope something comes my way, and that (husband) Bharat gets me a nice gift on behalf of Radhya.” (Also Read: Esha Deol Created An Everlasting Memory Of Her Daughter Radhya On Completing 1 Month) 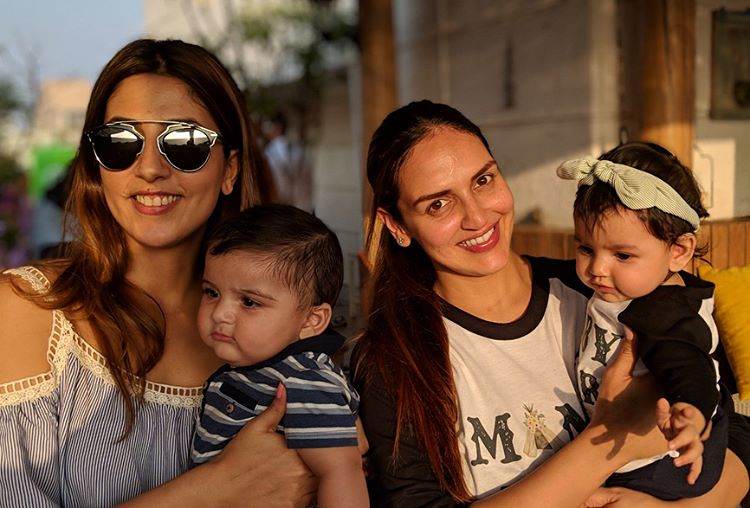 Esha Deol is the daughter of the legendary actress, Hema Malini and talking about her dearest mommy, Esha stated, “I am lucky to be Hema Malini's daughter. She means everything to me. I have known her as one of the strongest women in the whole world, and a complete woman. Memories of mamma raising us are happy ones. My sister Ahana and I grew up in an all-woman household that brimmed with culture. She ensured music, dance rehearsals and such activities always took place in the house.” (Also Read: Esha Deol Takhtani Performs Bharatanatyam With Mom Hema Malini, 5 Months Post Her Delivery)

Esha further added, “For as long as I can remember, I have grown up seeing her passion for dance. Her rehearsals in the house inspired me to learn dancing. Her make-up room was across my bedroom, and as I would wake up for school, I would see her getting ready for work with her make-up artist, hairdresser and other staff members preparing her for the day's shoot. All the hectic activity was great fun to watch. Ahana and I were always curious about the make-up room, and would wait for a chance to sneak inside and check out her cosmetics, costumes and shoes. I remember how I would die to try out the gorgeous wigs she wore at the shoots. When I fell in love with a pair of orange shoes she was to wear in a dance sequence, she had the designer make a replica pair for me.” Esha shared about her upbringing and what were the important aspects of life told to them (Esha and her sister, Ahana) by their mother, Hema Malini, “Mamma is a wise lady. She raised us with emotion and affection, and was always a pillar of strength for Ahana and me. It is because of her upbringing and the values she instilled in us that we have grown up to be independent and strong-willed. She always said the greatest gift that god has given us is that we were born as women. Whatever I am today is because of her. She taught me dance, culture, work ethics and, most importantly, how to grow up with dignity and grace.” (Also Read: Esha Deol Loses Pregnancy Weight Drastically, Her Transformation Makes Her Glow Like Never Before) 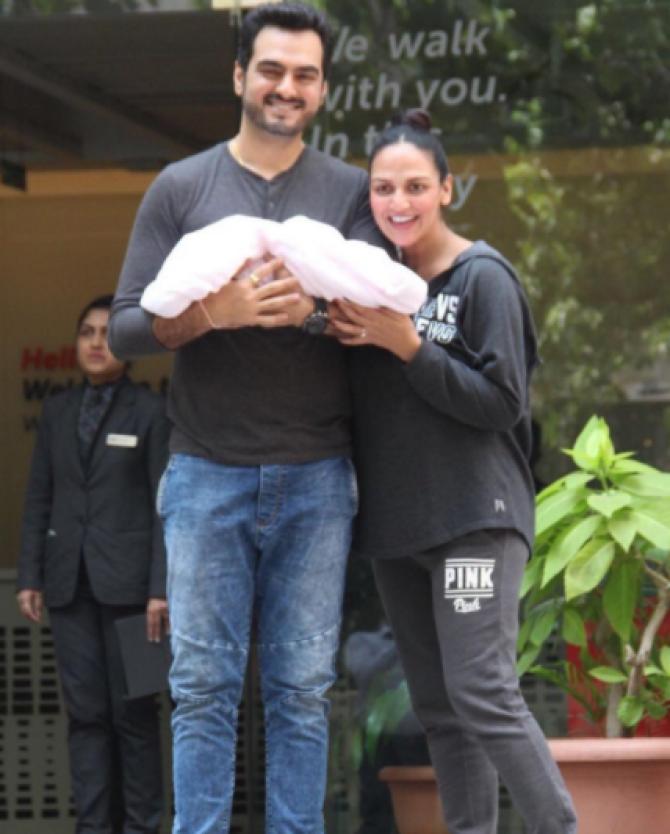 Reminiscing about her childhood, Esha recalled, “When I was in school, I recall mamma being strict when I did something wrong. But she could never be too strict. I cannot recall mamma ever raising her voice. She is a soft-hearted person. I guess all mothers are like that. After I started my acting career, mamma and I became more of friends. In time, I have come to realise that we both depend on one other for everything. I share everything with her and we never hide anything from each other.” (Also Read: Soha, Aishwarya, Karan, Gauri, Farah, Mira Share Pics Of Their Kids With Grandmoms On Mother's Day)

Esha further continued, “Mamma would become a very different person during vacations - especially when we flew to London every year for our summer vacations. There, she would turn into a complete housewife! She would cook for us every day, and even insisted on doing the dishes and supervising the laundry. In that one month when we were in London, she would seem completely transformed from the superstar on screen. Ahana and I always love pitching in whenever mamma cooks. She has received these awesome recipes from my maternal grandma and aunt, and I am yet to taste more lip-smacking rasam than the one that came from her kitchen.” Coming back to her daughter, Radhya, Esha talked about the sense of joy she feels as a mother. Esha revealed, “Mamma loved doing things for Ahana and me, and today I understand that sense of joy when I dote and fuss over my little one. It is something that makes you feel complete as a mother. Beautiful Radhya fills up my days and nights. Both Bharat and I are extremely fortunate to be blessed with her in our lives. Radhya is bubbly and always smiling. Sometimes she does mischievous things that instantly bring back memories of my own antics as a child.” (Also Read: Soha Shared Some Pictures Of Inaaya Naumi Kemmu, She Looks Like The Twin Sister Of Taimur Ali Khan)

Esha shared how her in-laws, her mother, Hema Malini and sister, Ahana are her support system. Esha retorted, “Mamma, Ahana and my in-laws comprise a strong support system for Radhya. My life feels more complete now, after having had her. Motherhood has made me more confident, content and relaxed as a person, it has worked like magic for me. A large chunk of my daily routine involves Radhya now. As soon as I finish this interview, it will be her bath time. We maintain a strict routine for her.” 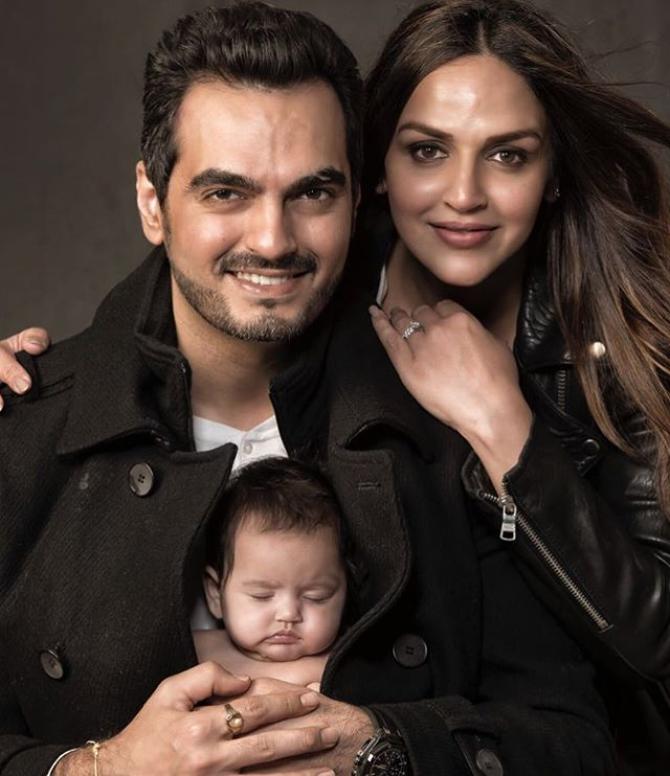 Esha Deol finally concluded by saying how she feels that a new chapter of her life has started with the arrival of her daughter, Radhya. Esha remarked, “Motherhood has also made me imbibe a lot more energy, and the yearning to live life to its fullest. I feel a huge chapter of my life has just started with the arrival of Radhya. Looking into her eyes, I understand why mamma's eyes light up every time she sees Ahana and me.”

Radhya Takhtani undoubtedly has Deol looks and looks like a mirror image of her mother, Esha Deol.

Next Read: Sunny Leone And Daniel Weber Make Their First Public Appearance As A Complete Family