This year marks the many firsts in Ekta Kapoor's son, Ravie Kapoor's life. In reply to a comment, Ekta revealed as to why she doesn't share a front-face picture of Ravie on social media.

How amazing a feeling it is to thrash stereotypes and live beyond societal standards! Gone are the days when people would have to get married to bear children. If your heart years to hear the word ‘Maa/Paa’ but you aren’t sure about getting married, there are various ways via which you can achieve parenthood. And how wonderfully, stars like Tusshar Kapoor, Karan Johar and Ekta Kapoor have proved to the world that you too can become a parent if you want to and there are various ways by which you can achieve the same. (Do Read: Ayushmann Khurrana's 'Jaan', Virajveer's Sketch Of 'Bala' Is A Hint Of How Much He Misses His Father)

We all were pleasantly surprised on January 31, 2019, when 44-year-old Ekta Kapoor had shared with the world that she is now a mommy! The television giant had taken to her respective social media handles to announce the great news with her fans and followers and had also revealed instances of how it all happened. Before we tell you more about a latest update pertaining to Ekta’s soon-to-be one-year-old son, Ravie Kapoor, checkout an adorable family moment of Ekta, Ravie and his naani, Shobha Kapoor along with a few other friends. 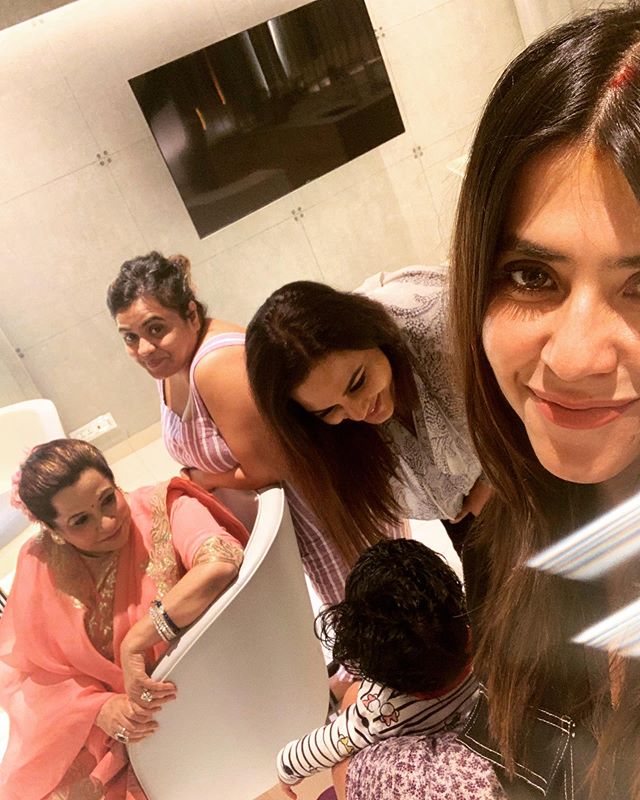 This year marks the many firsts in Ravie Kapoor’s life. The little one is celebrating his first Children’s Day’s today (November 14, 2019) and for the same, Ekta posted an adorable video of some daadu-pota playdate. In the video, legendary actor, Jeetendra was seen playing with his grandson, Ravie and Ekta were seen beautifully capturing the moment. Sharing the video, Ekta had shared, “Children’s day! Raviolis first!” Sufficing to everyone’s wishes, legendary actress, Neena Gupta commented, “Dikha doe na shakal” on the video. Ekta then posted a hilarious reply and shared, “Maaam meri maa mjhe ghar se nikal degi.” Now we know why Ravie is a hidden gem till now! On Rakhi 2019, again being the first one for Ravie Kapoor, who was seen perched in his star mama, Tusshar Kapoor’s arms as he was pampered to the fullest. Wearing an orange T-shirt and a yellow pant, Ekta was seen telling Tusshar that her son loves him more than he loves her! The adorable video was captioned as “Ravie ki pehli rakhee! N his mama is d best brother one cud have!” (Must Read: Taimur Ali Khan Spotted On The Sets With Mommy, Kareena Kapoor Khan In Punjab, Video Inside)

It was Ekta Kapoor’s mother, Shobha Kapoor’s 70th birthday on February 01, 2019, and on account of the same, Ekta had hared a picture of her and had written a heartfelt note for her. The note had indicated that she had given her the best birthday gift ever, by gifting her Ravie Kapoor! The Kumkum Bhagya producer had penned, “Happie bday to my boss! U cannot deny that on your 70th I’ve given d best bday gift to u! And I cannot deny that now I’m RULED BY TWO AQUARIANS.” Needless to say, Shobha Kapoor and her hubby, Jeetendra is on cloud nine as their family is now complete! Sharing about the same with the Mid-Day, the legendary actor and second-time daadu had stated, “Shobha and I were over the moon when we heard it first. We are looking forward to him coming home. Our family makes daily rounds of the suburban hospital where the baby is currently under supervision. My family says he (Ravie) looks just like me, but then, a child's looks keep changing every day. It's tough to say who he will resemble in the future. Now, I have Laksshya and Ravie — they are the apple of my eye. I can die peacefully now as both my babies have their own babies."

Ekta had taken to Instagram on January 31, 2019, and announcing the good news with all her fans, had penned, “By God’s grace, I have seen many successes in my life, but nothing beats the feeling of this beautiful soul being added in my world. I cannot even begin to express how happy my baby’s birth has made me. Everything in life doesn’t go the way you want it to but there are always solutions to those hiccups. I found mine and today I feel immensely blessed to become a parent. It is an emotional moment for me and my family and I can’t wait to begin this new journey of being a mother to my little bundle of joy, Ravie Kapoor." (Also Read: Priya Ahuja Rajda's Pregnancy Glow Is Unmissable As She Welcomes Final Month Of Pregnancy) Ekta Kapoor had also shared how her doctor, Dr Nandita Palshetkar had guided her during the entire process, and had posted a quote from her which could be read as “Ekta came to me some years back to become a mother. We tried to help her get pregnant with multiple cycles of IUI and also multiple cycles of IVF. But we were unsuccessful. Hence, we had to take help of the technique of surrogacy which we performed nine months back at our Bloom IVF centre. Nine months later, she had achieved success with the birth of a child on Sunday.” 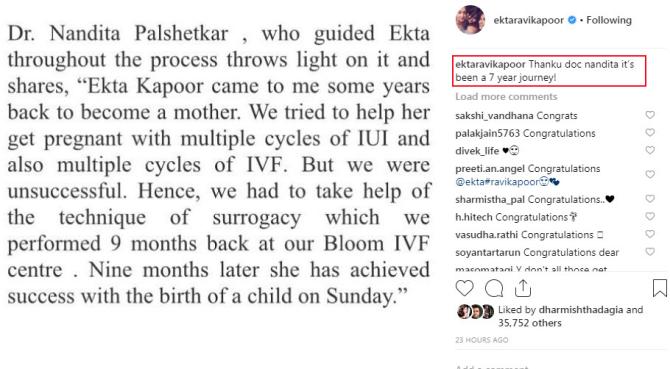 Guys, how badly do you want to see Ekta’s Ravioli? As affirmative as your answer can get, we copy you there! Good news is coming in heaps and bounty for Ekta Kapoor and her family. Riding high on the pillion of professional and personal high these days, Ekta Kapoor became a mother to her first child, Ravie Kapoor, born to her through surrogacy. As per reports, the little munchkin was born