Ekta Kapoor On Her Motherhood, Says It Took Her 7 Years To Take The Responsibility

Ekta Kapoor On Her Motherhood, Says It Took Her 7 Years To Take The Responsibility

Ekta Kapoor embraced motherhood on January 31, 2019, when her baby boy, Ravie Kapoor was born through surrogacy. She has talked about the responsibilities and how it took her 7 years to take them up. 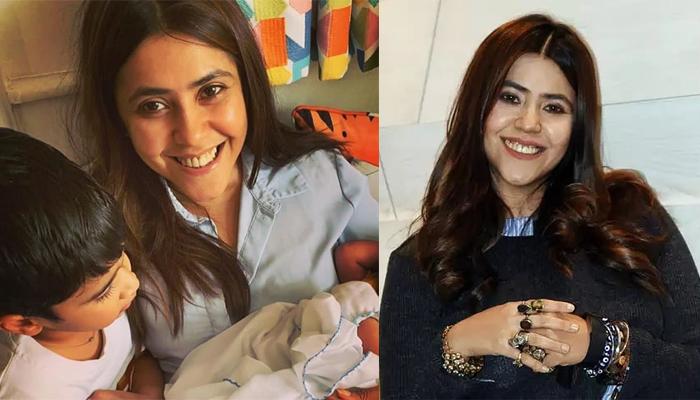 There is no greater joy in this world more than embracing parenthood. Our favourite Tinseltown celebrities have been incessantly giving us the happy news of their little munchkins for quite some time. One of the most reputed celebrities of B-town, Ekta Kapoor recently embraced motherhood on January 31, 2019. (You May Like: Sushmita Sen Gave Daughter Renee An Envelope With Details Of Her Real Parents, Here's Her Reaction) 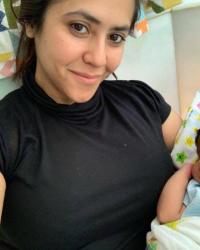 Ekta Kapoor, in an interview with the Deccan Chronicle, has shared that she had been trying to embrace motherhood for the past 7 years. She was quoted as saying, "I am a mother today, but let me tell you that I had begun contemplating it seven years ago. It literally took me that long to really take that responsibility." 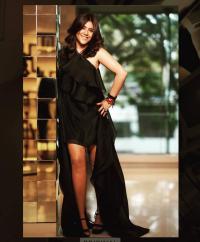 Ekta Kapoor also revealed how everyone in her office would think of her that she is not a mother, "Everybody says that motherhood is perfect, and the day a child is born a mother is also born. The expectations of mummy-hood, more than you, its the other mothers who talk. When we were writing the show, it was giving me jitters. Every time I wrote an episode, it was based on topics like bullying, gender fluidity, good-touch/bad-touch and other craziness. I was shivering, and they all said that thank god you’re not a mother. Little did they know that I would be one soon." 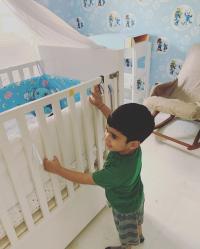 She has also shared that with Ravie Kapoor around, she wakes up happy in the mornings. She said, "I think the only difference with him around is that I have better mornings now. Be it dog moms or baby moms, they don’t go for walks themselves but will develop the habit for their babies’ health. It becomes their priority." (Must Read: Ananya Panday Reacts To Link-Up Rumours With Crush-Turned-Co-Star Kartik Aaryan, Says 'I Am Happy')

She further added, "Usually, I hate to dress up. I also don’t like to attend press conferences. Because this is a time when I have to take extra care. But now being a mother, I will have to forego my social assignments to an extent. I am happy about it though." 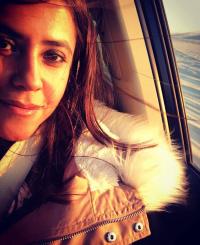 Ekta Kapoor, in an earlier interview with the Bombay Times, had talked about her son Ravie Kapoor. Sharing how she manages her time with her son, she was quoted as saying, “Currently, life is all about spending as much time as possible with my son. These days, I try and leave the office earlier than usual. I bring Ravie to the office frequently and he spends time with my team. I have a huge support system in my mother and my team, so whenever I get busy with meetings, they keep him entertained. He is only three months old, but he has made friends with my colleagues and it may sound unrealistic, but he recognises people at work.” 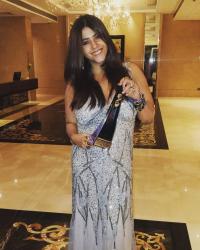 She had further stated, “That is one of the reasons I have set up a creche in my office. Even when my son grows older, the creche will continue, because it is important for working mothers to be around their babies. In fact, I should have built it in my office a long time ago. I regret not having done that earlier.” 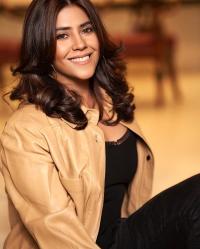 Ekta Kapoor had given an interview to film critic, Anupama Chopra after embracing motherhood. Ekta had shared that it was her birthday when she got to know that she is going to be a mother soon, “When I knew that the surrogate had conceived, and it was on June 7. On my birthday I got to know. I was a bit overwhelmed. I was like 'Okay this is happening. This is going to be a huge responsibility. I just wrote a show out which is going to be with an A-list Bollywood actress. It's called Mentalhood. It's about motherhood and every time we did the scripting about the Momzillas and the pressure you go through, the guilt you go through, tiger moms, helicopter moms, I was constantly feeling overwhelmed. But now I have realised that I have a lot of guilt even now.”

It was on January 31, 2019, when Ekta herself had taken to her official Instagram handle and had shared the happy news of the arrival of Ravie Kapoor. She had written, “By God’s grace, I have seen many successes in my life, but nothing beats the feeling of this beautiful soul being added in my world. I cannot even begin to express how happy my baby’s birth has made me. Everything in life doesn’t go the way you want it to but there are always solutions to those hiccups. I found mine and today I feel immensely blessed to become a parent. It is an emotional moment for me, and my family and I can’t wait to begin this new journey of being a mother to my little bundle of joy, Ravie Kapoor.” (Don't Miss: Sonam Kapoor Clarifies Her Take On Katrina Kaif Showing Concern Over Janhvi Kapoor's 'Short Shorts') 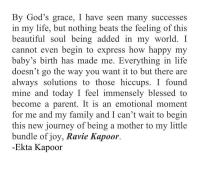