Janhvi Kapoor is one such B-town celebrity, who has made the gym look glamorous. But seems like her gym partner, Katrina Kaif is worried about her ‘very, very short shorts’. 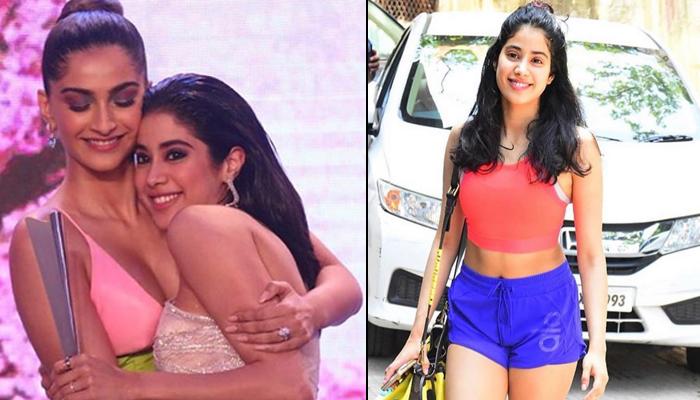 On every New Year’s eve when the clock strikes 12, people make certain promises to themselves. And getting fit and flaunting abs on your next vacation is one such resolution that no one can deny making every single year, without a fail. However, our excitement for going to the gym doesn’t last long and we are soon found golloping that yummy piece of chocolate cake at the party. Won’t you agree with us? Though Bollywood movies and celebrities have motivated us with their workout pictures and gym looks, we are still left wondering and waiting for the day when we’ll leave our comfortable beds to run on the treadmill. (Also Read: Inaaya Naumi Kemmu Showers Everyone With Flying Kisses, Mom Soha Ali Khan Gets Possessive)

Janhvi Kapoor is one such B-town celebrity, who has made the ‘gym class today!’ look glamorous just how Kareena Kapoor a.k.a. Poo made it look in Kabhi Khushi Kabhie Gham. More than Janhvi’s beautiful easy-breezy ethnic wears on her casual outings in the city, her gym looks have been the topic of discussion in media. Be it holographic shorts, neon leggings or matching tank tops and shorts, Janhvi has aced her gym look every single time and we totally love it. But seems like Katrina Kaif is worried about her gym partner’s ‘very, very short shorts’.

Recently, Katrina Kaif appeared on Neha Dhupia’s celebrity chat show, BFFs with Vogue with her BFF Anaita Shroff and it was her comment about Janhvi Kapoor’s gym clothes that got all the attention. When Neha asked Katrina to name a Bollywood celebrity who goes over-the-top with his/her gym looks, the Bharat actress answered, "Not OTT but I am concerned about the very, very short shorts that Jahnvi wears! She comes to my gym as well, so we often are together in the gym. I just worry about her sometimes."

But soon after Katrina Kaif’s comment on Janhvi Kapoor’s clothes, the Dhadak star’s elder sister, Sonam Kapoor Ahuja posted a picture of the Takht actress as her Instagram story and had written, "She also wears regular clothes and rocks it." Later, on June 2, 2019, Sonam clarified that she wasn’t defending Janhvi and her Instagram story was an inside joke between the sisters. She tweeted, “Guys I wasn’t defending Janhvi over something my very dear friend Katrina might have innocently said. It’s an inside joke with my sister on her gym looks that get papped. Pls don’t create drama mediawallas.”

At the Hello! India’s award function on March 17, 2019, Sonam Kapoor Ahuja and Janhvi Kapoor posed for an ‘oh-so-stylish’ picture together and their camaraderie was something which didn’t escaped the media glare. Sonam had shared the same and wrote along with it, “With my date last night.. thank you @hellomagindia for our awards @janhvikapoor got for “best debut of the year” and I was given “trailblazer performer of the year” it’s so heartening to be rewarded for the things you believe in. @prathameshb84.” Sonam and Janhvi had also exchanged heartfelt comments on the picture. Here’s the screenshot of the same: (Also Read: Amitabh Bachchan Reveals Story Behind His 'Next Day' Wedding With Jaya Bhaduri On 46th Anniversary)

For the uninitiated ones, Sonam Kapoor Ahuja is also Janhvi Kapoor’s go-to person for all the fashion related advice. Speaking about Sonam and Rhea Kapoor, Janhvi had said in an interview, “I keep sending them pictures of my looks, or if I’m at a shoot, I’ll get my hair and make-up approved by them." When Janhvi turned 22 on March 6, 2019, Sonam had shared a throwback childhood picture, holding her baby sister in her arms, and had captioned it, “Happy happy birthday baby jannu. All my love baby girl. Keep smiling your gorgeous smile. @janhvikapoor.”

Sonam Kapoor got married to the love of her life, Anand Ahuja on May 8, 2018, and her wedding outfits gave major bridal goals to all the to-be brides. Sonam had performed the Punjabi kalire ritual on her cousin, Janhvi Kapoor and it was interesting to watch the latter’s reaction. For those who don’t know, in the kalire ritual, wherein the bride shakes off the kalire on the heads of unmarried girls, be it her cousins or friends and if any part or leaf of the kalire drops off on them, they are most likely to get married next. Here’s the video of Janhvi praying that the kalires don’t fall off on her and what happened next: (Also Read: Saif Ali Khan, Kareena Kapoor Khan And Taimur Ali Khan Say 'Hi' From Tuscany, Give Major Vacay Goals)

What are your views on Janhvi Kapoor’s gym clothes? Slay or nay? Let us know!