Disha Patani Reveals Whom She Looks Up To During Bad Days Of Her Life, And It's Not Tiger Shroff

Disha Patani Reveals Whom She Looks Up To During Bad Days Of Her Life, And It's Not Tiger Shroff

Bollywood actress, Disha Patani revealed the name of the person she looks up to during her depressed days and it's pure family goals. Find out!

Bollywood actress, Disha Patani is one of the most stunning actresses of this generation, and her selfies are more than enough to break the internet in split seconds. However, she's not just all about her stunning looks as she had proved the mettle of her exceptional acting in movies like MS Dhoni: The Untold Story, Baaghi 2, Malang, and many others. The young actress is quite active on social media and often shares everything about her day with her fans. (Recommended Read: Mohammad Azharuddin's Ex-Wife, Sangeeta Bijlani Wishes His Son Asad And Wife Anam On 1st Anniversary)

However, she's quite private in terms of her family as she doesn't post a lot of pictures with them. As she wants to enjoy it in a low-key way. But there's no doubt that she shares a beautiful bond with her parents and sister and a glimpse of the same we saw again during her latest Q&A session on Instagram. Scroll down to take a look!

Disha Patani Is Stunned With Could Be Future-'Nanad', Krishna Shroff's Hot Pictures, Reaction Inside On December 10, 2020, Bollywood actress, Disha Patani took to her Instagram stories and interacted with her fans through a Q&A session after a very long time. While some asked about her mobile's wallpaper, favourite Hollywood movie star, and to choose from beach and mountains. One fan asked her to reveal the name of the person, to whom she looks up to during her bad and low days. The actress revealed that it is her sister, Khushboo Patani, who always has her back during the low phases of her life and her answer can be read as "My Sister". Take a look: 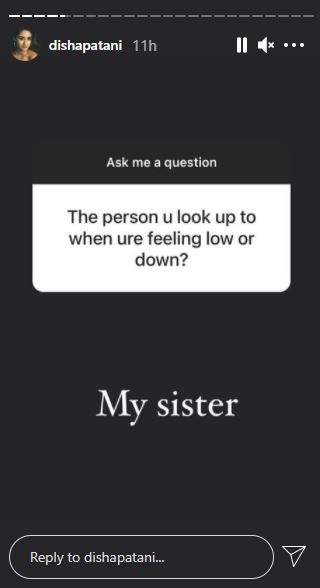 For the uninitiated, Disha Patani's sister, Khushboo Patani is currently serving the nation as an Army Lieutenant as she had followed the footsteps of their father, Jagdish Singh Patani, who is a deputy SP in state power department's vigilance unit. We have often seen Khushboo sharing videos of her intense workouts and is known for her fashion sense and ripped physique. On September 3, 2018, Disha Patani had shared a beautiful picture with her sister, Khushboo Patani and had called her 'most beautiful' in her caption that could be read as "My most beautiful sister" followed by a red heart emoticon. (Don't Miss: Ravi Dubey And Sargun Mehta Receive A Gift From His Parents, And It Reminds Them About Their Wedding) Well, Disha Patani shares a warm camaraderie not only with her sister, Khushboo but also with her rumoured beau, Tiger Shroff's sister, Krishna Shroff. We have seen them going on dinners and lunches together time and again through their respective IG handles. In an interview with the Hindustan Times, Disha Patani had talked about her warm rapport with Krishna Shroff and had said, "I love Krishna. Usually, girls don't support each other, but she has always been so supportive. She is so strong and inspires me to lift heavier weights. I love how good she looks in her Instagram posts. We keep messaging each other. It's a relationship based on understanding." (Also Read: Virat Kohli And Anushka Sharma Want To Bring Up Their First Child In The World Like This [Details]) Do you share a similar bond with your sister? Let us know!