Dipika Kakar and Shoaib Ibrahim are one of the most sought-after couples of the telly world. On April 23, 2020, Dipika shared an adorable family picture with Shoaib and her mother-in-law.

There is nothing as great as love and nothing greater than a family. For a girl, getting married might be her childhood dream, but the thought of leaving her parents and going to a new house is unimaginable. For her leaving the comfort of her house and adjusting in a new family bring jitters to her mind. But as they say, love surpasses everything. If there is love, then all these adjustments seem like a cakewalk. Television industry’s most loved actress, Dipika Kakar is an example of the same and has time and again proved how lucky she is to have been married in such a beautiful family. (Also Read: Shaheen Bhatt Is Proud Of Sister, Alia Bhatt As She Started Reading The Harry Potter Series)

It was on February 22, 2018, when Dipika Kakar had added Ibrahim to her name after she had said Qubool Hai to Shoaib Ibrahim in a nikah ceremony at his hometown, Maudaha. Dipika is adored by her in-laws, and she also never leaves a chance to express her love for them. Be it planning a pink-themed birthday party for her sister-in-law, Saba Ali Khan, or spending time with her mother-in-law, Deepika is a doting bahu of the Ibrahim family. In many of her interviews, she has expressed the immense love showered by her in-laws and her recent post is an example of the same. On April 23, 2020, Dipika, who is all set to begin the holy month of Ramadan, took to her Instagram handle and shared a picture with hubby, Shoaib Ibrahim, and her mother-in-law. In the picture, Dipika was seen hugging her mother-in-law while Shoaib was seen resting his head on Dipika’s shoulder while her sister-in-law, Saba clicked the picture. Along with the picture, she wrote how blessed she is to have such a loving family. Her post can be read as “In muskurahaton se badhkar ab aur kya maangu uparwale se.... Apne khazaane ka ye sabse keemti zewar usne hume de diya hai. @saba_ka_jahaan was clicking it so is not in it. This pic is incomplete without her.” 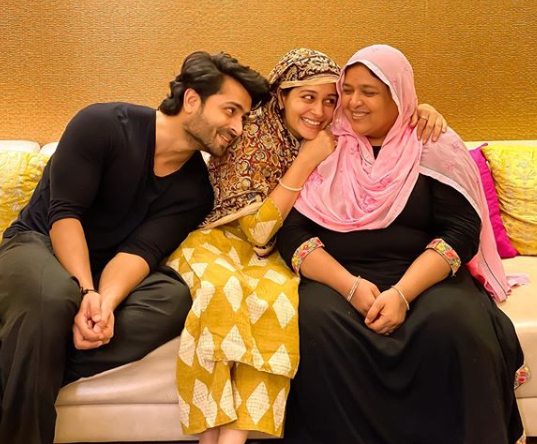 Sometime back, Dipika Kakar Ibrahim and Shoaib Ibrahim had given a glimpse of their Sunday-chilling moment with his mom. While Dipika could be seen embracing her mother-in-law with the tightest hug, Shoaib had rested on his mother’s lap. Dipika had captioned her post as “Yes the most peaceful place is the mother's arms and sleeping in her lap... we both are undoubtedly having the most relaxed holiday being pampered by Ammi... P.S: @shoaib2087 I’m her favourite” and Shoaib had written, “Khushiyon bhare pal.” (Also Read: Anushka Sharma's Reaction When Virat Kohli Aced 'Guess The Gibberish' Challenge While Weight Lifting) 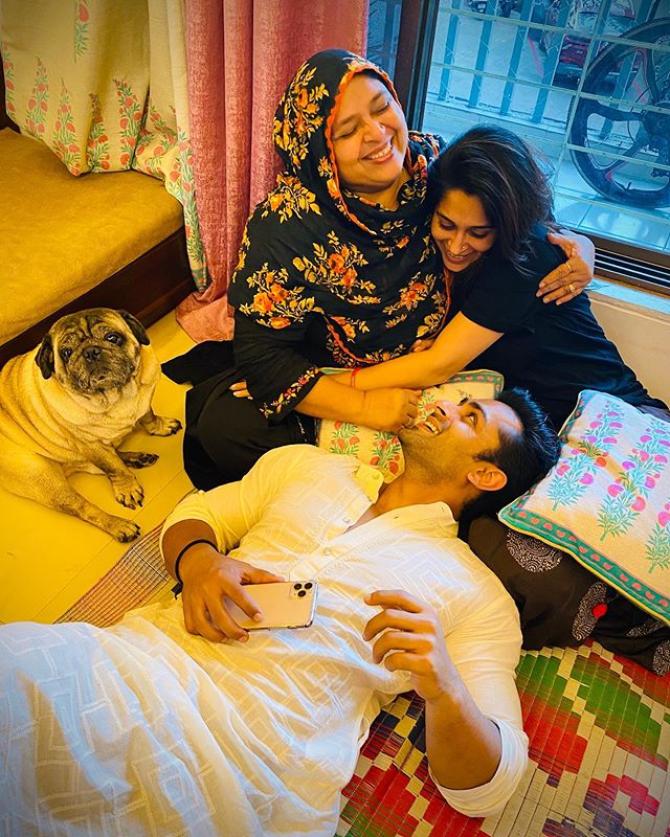 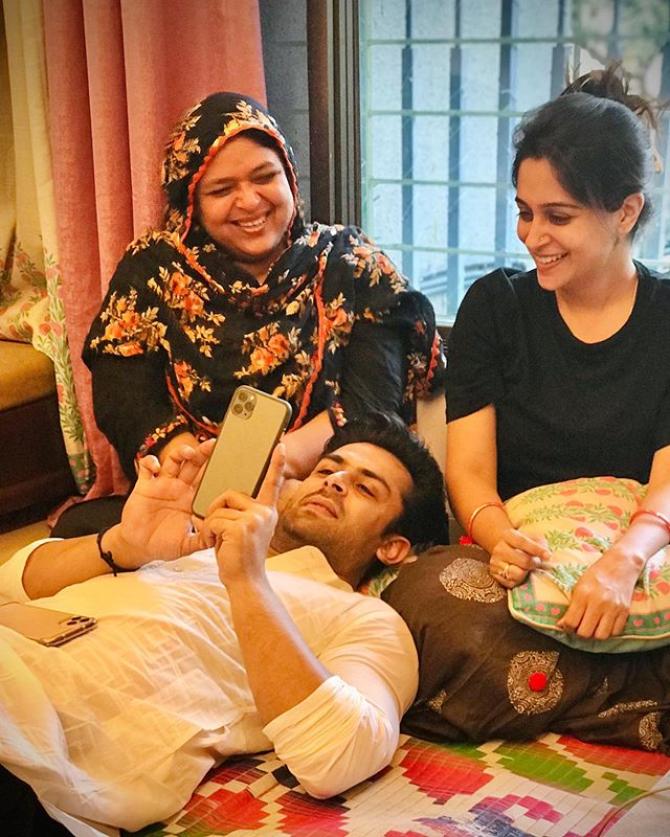 Amidst the 21-day lockdown, everyone is spending quality time with their partners. Shoaib too gives glimpses of his beautiful moments, every now and then on his Instagram handle. On April 1, 2020, he had taken to his Instagram handle and had shared a lovely picture with his joru, Dipika Kakar. Dressed in their casual outfits, the duo had looked adorable as they spend some ‘us’ time amid the quarantine. Along with the picture, Shoaib had written, “Me and you. Just us two.” 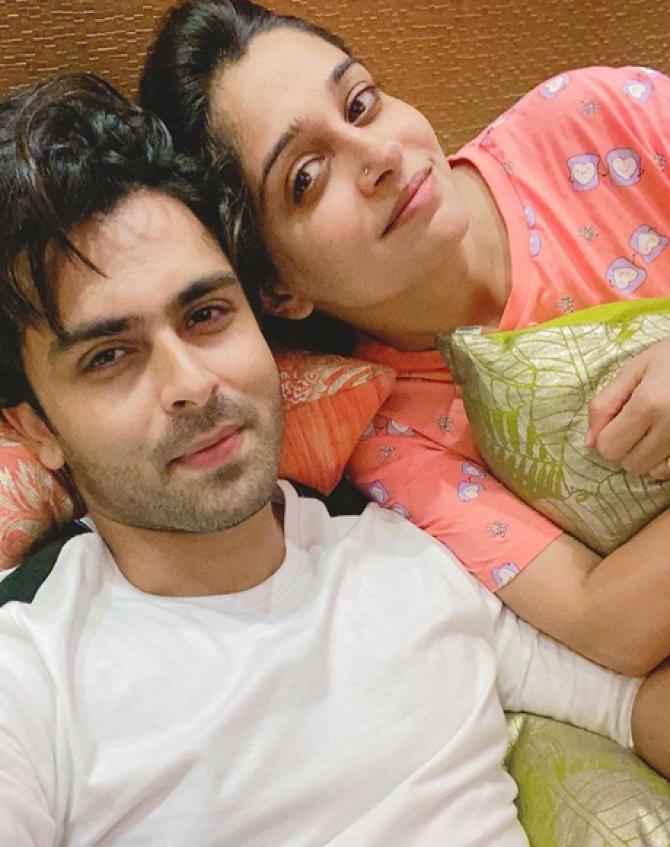 This is Dipika’s second marriage to Shoaib. Her previous marriage had ended up in a divorce in 2015 due to compatibility issues. In an interview with The Times of India, Dipika had talked about how she had fallen in love with Shoaib and had shared, "I wanted to be sure that this relationship wasn’t on the rebound. Also, we were getting to know each other better. No matter how progressive we become, being a divorcee has some kind of a social stigma attached to it in our society. I had that stamp on me. But he gave me that space and despite being aware of my past, never complained about it. He has in fact always respected that. Coming from a small town, even his parents never let me feel that. I have always longed for family. Ammi sends dabba for me when my mother is not there. I feel I am more close to his mom than him. Everything is positive and we are more at peace now." (Also Read: Disha Patani Shares BTS Video From 'Baaghi 3', Gets Compliments From Tiger Shroff's Mom And Sister) What do you think about Dipika’s camaraderie with her in-laws? Let us know. Getting married is every girl’s dream, but the one thing which brings jitters to her is leaving the comfort of her home and stepping into a new house. She dreads the thought of adjusting herself in a place that is completely new for her. And apart from all these things,