Alia Bhatt has been giving glimpses of her lockdown phase and how she indulges in her favourite hobbies. Recently, her sister, Shaheen Bhatt shared a picture of Alia turning into a book worm.

Amid the deadly Cornonavirus spreading at a fast pace, the entire country is under lockdown. And all of us are spending time with family, some are turning into master chefs by bringing out their culinary skills while others are making most of their time while indulging in their favourite hobbies. B-town celebs are also not far behind. From donning the chef’s hat, doing household chores to sweating it out by regular workouts, B-town celebs always give glimpses of their lockdown activities. And one such celeb is Alia Bhatt, who has been inspiring her fans with her cooking skills. (Also Read: Milind Soman Reveals How Things Have Changed Post-Marriage With Wife, Ankita Konwar)

But apart from cooking, Alia also makes sure to indulge in other activities as well. Sometime back, Alia’s sister, Shaheen Bhatt had shared a picture of her sister indulging in some writing. On March 31, 2020, Shaheen had taken to her Instagram handle and had shared a picture of Alia trying her hand in writing. In the picture, Alia had looked happy learning a new skill, while Shaheen had tagged the picture as “Writers’ room.” And now, it seems like Alia is all set to take up another inspiration from her writer sister, Shaheen. 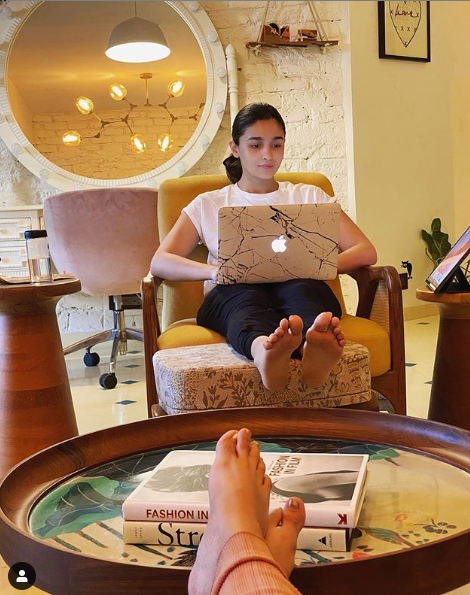 On April 23, 2020, Shaheen took to her Instagram stories and shared a picture of Alia engrossed in reading a book. In the picture, Alia looked pretty in a navy-blue top with her hair tied back. Along with picture, Shaheen wrote, “She's finally reading all the many versions of Hary Potter I have lying around. So proud.” Now, it is interesting to see how Shaheen is turning her little sister into a book worm. Alia took to her Instagram handle and shared what she is currently hooked to. Sharing the first book of the Harry Potter series, The Philosopher’s Stone Alia wrote, “I’ve made a new friend #worldbookday #currentlyreading.” On Alia’s post, Shaheen commented, “I’ve never been so happy.” 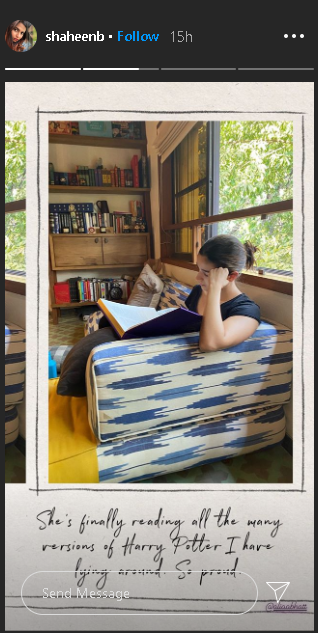 On April 3, 2020, the Bhatt sisters had given a glimpse of their quarantine cooking skills. They had donned their aprons and had baked themselves a delicious cake and banana bread. Alia Bhatt had taken to her Instagram handle and had posted pictures, sharing a glimpse of the final outcome with her fans. The caption along with the picture could be read as "Stayed home & ...baked a little with the sister @shaheenb made the real chocolate cake & I made the grain-free paleo banana bread #learntsomethingnew" (Also Read: Smriti Khanna's Husband, Gautam Gupta Aces His 'Daddy Duties' As He Makes His Baby Girl Sleep) 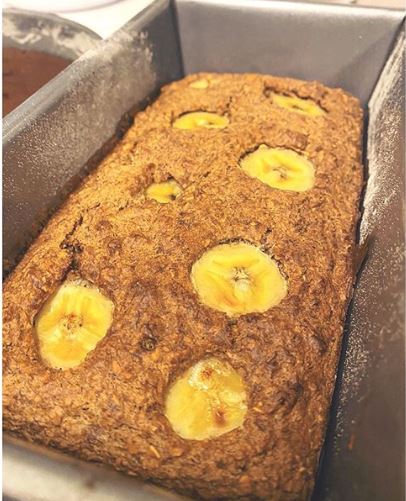 Shaheen Bhatt is quite active on social media and always makes sure to share pictures of her family. On December 30, 2019, Shaheen had taken to her Instagram handle and had shared a collage of Alia. The collage had some really funny pictures of Alia looking stressed. Along with the picture, Shaheen had written, “2019 and Alia’s Resting Stressed Face.” On Shaheen's post, Alia's comment was unmissable. Her mom, Soni Razdan, and her best friend, Akansha Ranjan Kapoor too had commented. 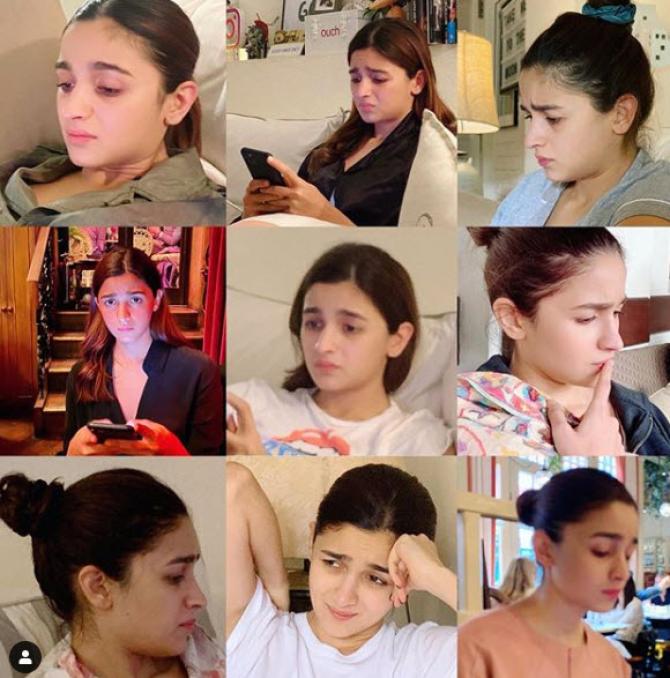 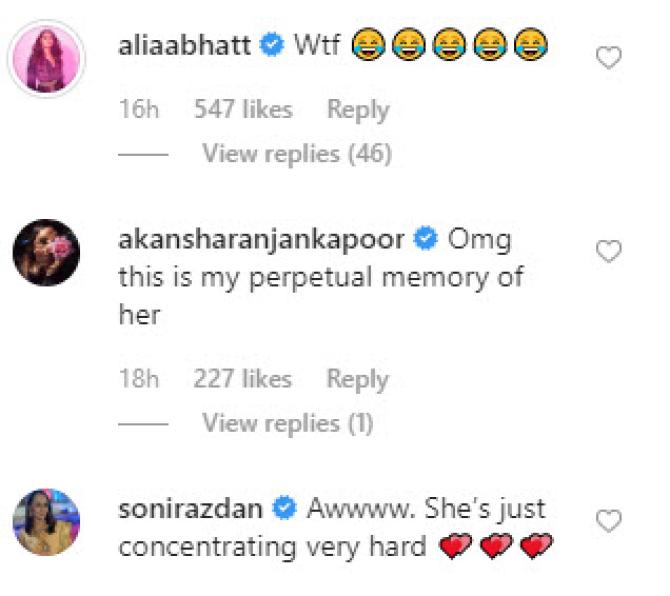 Alia and Shaheen share a very close bond with each other and not many people know that Shaheen had a long struggle with depression. And in 2016, she had talked for the first time about her fight with depression in a social media post. On December 1, 2019, Alia Bhatt had attended a seminar, 'We The Women' in Mumbai with her sister, Shaheen Bhatt. During the event, Alia couldn’t control her emotions while talking about Shaheen’s battle with depression and had broken into tears. Alia, while addressing the issue had stated that she was very proud of her sister, who had addressed her fight with depression and had managed to overcome it. An emotional Alia while talking about the issue, had burst into tears and was consoled by her sister, Shaheen. (Also Read: Ankita Lokhande Opens Up On Her Marriage Plans With Boyfriend, Vicky Jain, Deets Inside) 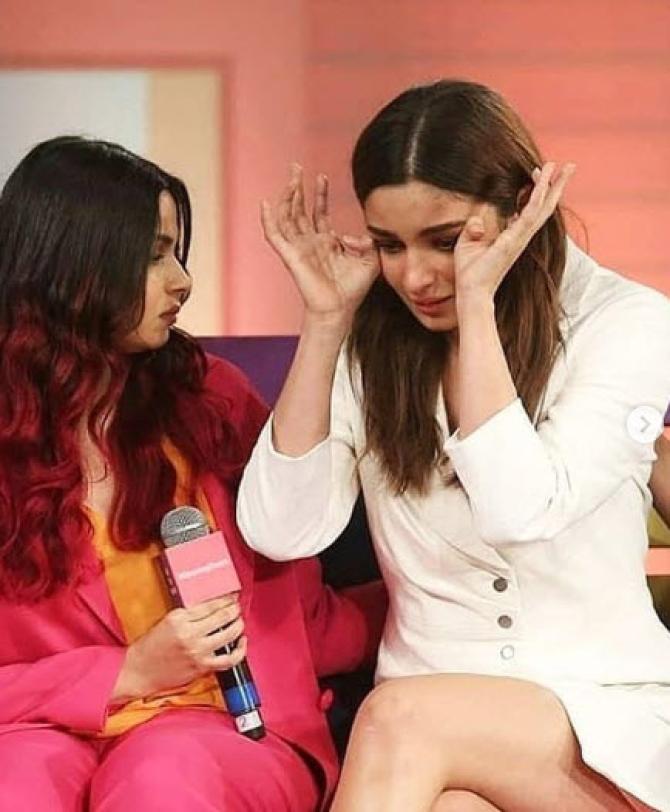 Are you also passing your time reading your favourite book? Let us know.