In a series of posts on her IG handle, Dipika Chikhlia Topiwala had revealed how she had met her husband, Hemant Topiwala and delighted her fans with some unseen and beautiful wedding pictures. 33 years ago, the release of Ramayan by Ramanand Sagar had changed the face of Indian television. Aired on Doordarshan, Ramayan had earned a spot in the Limca Book of Records for the world’s most-watched mythological series. And with the rerun of Ramayan in 2020, it had brought the star cast of the series back in headlines and everyone got curious about what they are up to after 33 years of their iconic show, professionally as well as on the personal front. Dipika Chikhlia, who had shot to fame with her role as Sita in Ramayan, had continued to act in several Hindi, Bengali, Tamil, and Marathi movies. (Also Read: Ranveer Singh Reacts To Wife, Deepika Padukone's Photos With Ex-Beau, Ranbir Kapoor Remembering YJHD)

A lot has been said and written about the professional life of Dipika Chikhlia, not much is known about her personal life. Last seen in the 2019 film, Bala as the protagonist, Yami Gautam’s mother and to be next seen as Sarojini Naidu in her biopic, Dipika is enjoying the success in professional life. On the personal front, Dipika is married to Hemant Topiwala, owner of Shingar Bindi and Tips and Toes cosmetics. Dipika and Hemant are blessed with two daughters, Nidhi Topiwala and Juhi Topiwala. In a series of posts on her IG handle, Dipika Chikhlia Topiwala had revealed how she had met her husband, Hemant Topiwala and delighted her fans with some unseen and beautiful pictures from their wedding. Revealing how she had met her real-life Ram, Dipika had captioned a picture from her varmala ceremony as "Just wondering do you ever want to know how I met my husband #husband #wife#marraige#live# #faith #trust #love #life #bind #actor #actress #beautiful-life #happiness #god #blessings." 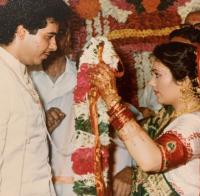 Sharing further details, Dipika Chikhlia Topiwala had posted a beautiful solo picture of herself as a bride and had written, "All of you know how sita met ram I thought to let you in on a secret as to how I met my Real life Ram . ..my husband's family has been manufacturing and selling traditional Indian cosmetics under the name of Shingar since 1961....my very first movie that I did was Sun Meri Laila and in the film there was a scene where I model for an ad film and that ad film was for Shingar Kajal....when we were shooting for the ad scene, Hemant came on the set to watch the shoot....that's when we first met... After that we both got busy with our lives but we both were on each other's mind till we finally met again...to be contd... #marraige #bond #actor #movie #1st #faith #trustbeive" as the caption. (Also Read: Sakshi Dhoni Opens Up About MS Dhoni's Plans Of Moving To Hills If There's No Cricket Post Lockdown) 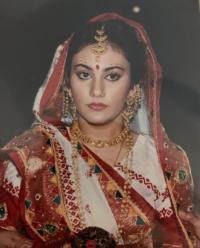 Dipika Chikhlia Topiwala had then posted a glimpse of the ad shoot of Hemant Topiwala’s brand, Shingar and had written along with it, "This was the add shot for his brand ,product was kaajal ...still making kaajal and bindi ,kumkum ....so wat happened on sets.. ...to continue." Finally, concluding the details of their love story with a picture from their saat pheras, Dipika had written, "So my insta family ... the story goes on ....we chatted on the sets bout our carriers , that was the same time he started attending his fathers office along side with his studies ...years later he saw me at a parlour near my home. He later told me I was always playing up on his mind all through those years.Finally through a family friend we met up on 28th april 1991 and it so happened that we spend 2hrs chatting up and instantly made up our minds and both of us went back home and announced we found our life partner ...we did a small ceremony on my birthday 29th april (goldhana or roka )later the same year we got married .Rest is history." 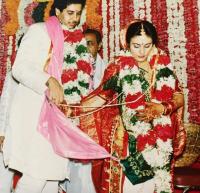 In a throwback interview with Yogesh Mishra, Dipika Chikhlia Topiwala had recalled an incident that had taken place when her stardom was at the peak. Dipika had stated, “I was very young that time during Ramayan TV serial. People used to touch my feet. I will not mention the name. I had gone to Delhi to do a show for a renowned person. His grandparents did sashtang pranaam. That time I was having lunch. Immediately I kept my plate there and got up. I was embraced. People who are even elder than my parents are doing sasthang pranaam to me. I hold them and allowed them to sit. I felt guilty. First time in my life I felt ashamed. Finally, I dared to say that I am not Sita. I am an actor. She said 'yes I know you are not Sita. You are an actor. We see you in TV. But you tell me, there are lot of girls in India but why you only got this role'. I was shocked to listen her logic. I could not say anything after that, but that conversation left a big impact on my life. That time I realised that I need to respect this role and the image because people don’t look at me as a Dipika, they look at me as a Sita and I have responsibility towards those fans of mine.” (Also Read: Unseen Pictures Of Riteish Deshmukh And Genelia D'Souza's Maharashtrian Wedding You Just Can't Miss!) Dipika and Hemant’s wedding pictures are all about love and happiness! We wish them an eternity of togetherness!