Dimpy Ganguly's Birthday Wish For Her 'Handsome' Hubby, Rohit Roy Is Every Self-Obsessed Wifey Ever

Dimpy Ganguly's Birthday Wish For Her 'Handsome' Hubby, Rohit Roy Is Every Self-Obsessed Wifey Ever

On March 19, 2020, Dimpy Ganguly’s hubby, Rohit Roy turned a year older and she posted a twinning picture with him to mark his birthday. Read on her perfect birthday wish for her 'handsome' hubby. 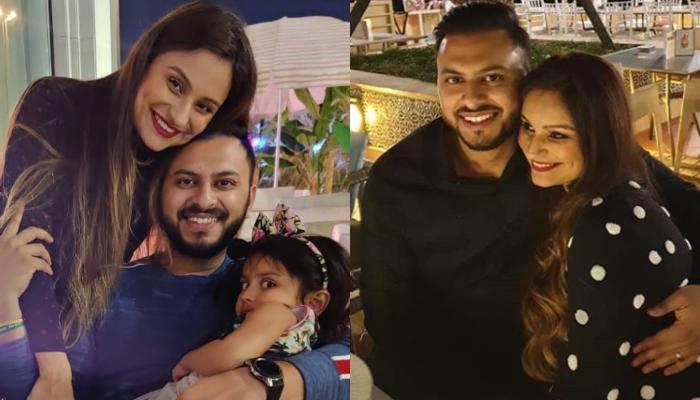 We have always believed that fate and destiny only play their roles in movies to untie hero and heroine. But when fate plays Cupid in real-life and makes us meet our soulmate, it's only then we realise that what is meant to happen, will always find its way. Love eventually finds it way and that is when destiny plays its role. Rahul Mahajan’s ex-wife, Dimpy Ganguly’s love story with her husband, Rohit Roy is a perfect example of extraordinary is the feeling when serendipity plays its role. (Also Read: Dipika Kakkar Ibrahim Makes The Best Use Of Her Quarantine Period With Hubby, Shoaib Ibrahim)

It was in 2010 when Dimpy Ganguly had married Rahul Mahajan, the son of former Union Cabinet Minister, Pramod Mahajan, on national television. But their marriage didn’t last long and Dimpy parted ways with Rahul after filing a complaint against him for domestic violence. Moving on in life, Dimpy found love in her childhood crush, Rohit and she gives credit to the destiny for bringing them together after so many years.

On March 19, 2020, Dimpy Ganguly’s hubby, Rohit Roy turned a year older and she posted a twinning picture with him to mark his birthday. To wish Rohit on his birthday, Dimpy captioned her twinning in black picture with him as “Dear husband, on your birthday I wanted to wish you the very best, but you already have me. No need. Happy Birthday handsome.” 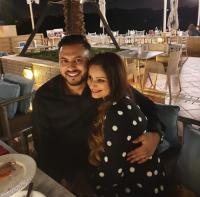 In an interview with The Times of India, Dimpy Ganguly had revealed how destiny played the role in her love story with Rohit Roy. She had remarked, “We were from different schools and would meet only during fests, but we could never talk about our feelings for each other. And then, I moved on. Strangely, I bumped into him in Dubai in 2013, almost a decade later, and that's when we confessed our feelings to each other. I couldn't believe that the guy who I crushed on, liked me too. The innocent school charm brought us closer, apart from the fact that we belonged to Kolkata. After I moved out of the city, my parents bought a new house which turned out to be just a few kilometres away from Rohit's house. It was as if destiny was trying to bring us together.” (Also Read: Krishna Shroff Posts Romantic Picture With Beau, Eban Hyams From Their Quarantine Period In Mizoram)

Dimpy Ganguly and Rohit Roy are living their happily ever after with their baby girl, Reanna Roy and soon their family of three will be completed with the arrival of their second baby. Rohit and Dimpy are all set to experience the joy of parenthood once again and Reanna will soon be promoted to big sister. Sometime back, Dimpy had given a glimpse of her ‘outfit of the night’ for a date with her hubby, Rohit. Dimpy had looked stunning in a black dress, which she had paired with black heels and her hair tied in a ponytail. Complementing his pregnant wife, Rohit had looked dapper in a white shirt, beige pants and a black coat. Here’s a picture of Dimpy, radiating pregnancy glow and flaunting her mini-baby bump just before leaving for her date night: 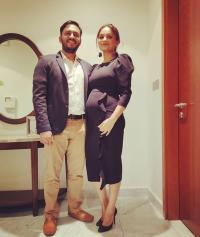 We wish a very happy birthday to Rohit! Happiness is to pack your bags and spend your entire weekend in the midst of the sun, sand, and sea! However, the year 2020 came as a big shock to everyone, who loves travelling. The Coronavirus pandemic not only halted our international travels, but it also stopped us from travelling