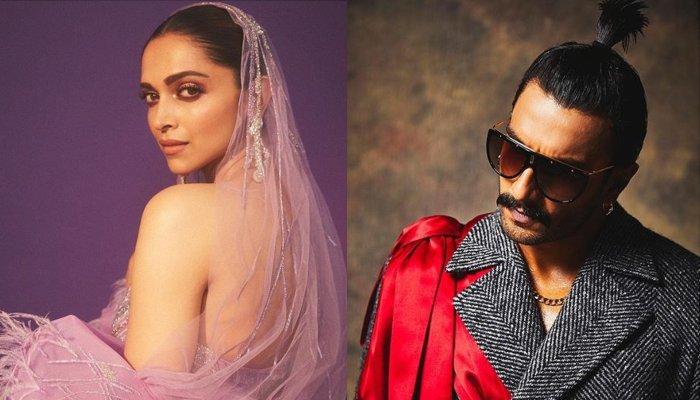 Gone are the days when we would eagerly wait for newspapers and magazines to learn about our favourite celebs. While we still do so now, but all thanks to social media and technology that celebs themselves share news and updates with us about their love life and we can’t be more grateful! One of the hottest celeb couples of the Tinseltown, Deepika Padukone and Ranveer Singh share a great bond with one another and a glimpse of the same can be seen on almost every post of theirs. And thus, in the world of PDAs and memes, Deepika and Ranveer surely tell us how to express love for one another and make lemonade when life gives you lemons! (Do Read: Parth Samthaan Hosts Crazy Housewarming Party For Kasauti Friends, Only Erica Fernandes Was Missing)

Deepika Padukone and Ranveer Singh recently made their public appearance at the IIFA Awards 2019. That is exactly when an adorable gesture of the latter for his wife had yet again swept us away! A picture snapped by the paparazzi had Ranveer hold Deepika’s long veil as she neared her seat. What appeared from the image, as Ranveer walked behind Deepika, holding the feather trail of her veil, the missus walked ahead of him, greeting and smiling people who came in her way! This gesture yet again wanted us to shout out loud to Ranveer, “There man, you are already the husband of the millennium!”

In the world of social media, Deepika Padukone surely knows how to take these gimmicks sportingly. The superstar took to her Instagram and shared a picture of her hubby, Ranveer Singh, trolling his IIFA 2019 look, wherein he was sporting a straight pigtail up his head. In a meme which said “Who did it better?”, juxtaposing pictures of Ranveer’s IIFA look with the character ‘Agnes’ from the film, Despicable Me, sporting a similar hairstyle, the doting wife answered the meme by writing the words “Mine” atop the picture tagging Ranveer in it! In the next story, she posted a meme wherein her picture was placed next to a long, purple mop with the words “Close enough” written on top of it. A very sporting Deepika had captioned the same with a “ROFL” (Rolling On Floor Laughing, silly!) sticker on it! Here are the images: 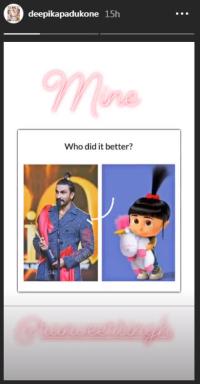 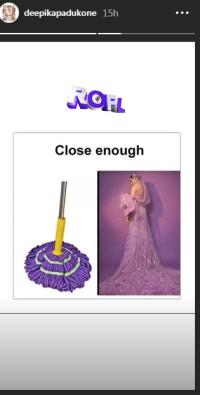 Deepika Padukone and Ranveer Singh had gotten married in November 2018 and most of their beautiful wedding pictures were transformed into hilarious memes. In a recent chat show, the Chhapaak actress was asked to comment on a few memes about them as a couple. One of them could be read as “Ranveer Deepika ki maang mein chutney bharega, sindoor nahi”, in reference to a spicy sauce, that Ranveer endorses. Reacting to the same, Deepika had shared, “This is totally possible knowing how obsessed I am with anything that is spicy being the true South Indian that I am. It is possible, knowing my love for spice.” Another meme which had stated, “Rishtey ek, shaadiaan anek. It’s not only Ranveer weds Deepika, but it’s also Goibibo weds makemytrip, Asian Paints weds Nerolac Paints, Axis Bank weds Kotak Mahindra, and above all its Oppo weds Vivo”, the beauty broke into jigs of laughter! (Must Read: Alia Bhatt Wishes Her 'Pops' Mahesh Bhatt On His 71st Birthday With An Unseen BTS Glimpse Of Sadak 2)

As it’s appearing from Deepika Padukone’s reactions, she is quite a sport when it comes to memes. Last year, her younger sister, Anisha Padukone had shared how normal a girl Deepika is when she is at home. And she did not share this easily. Anisha had explained it by a hilarious troll and a comment thereafter Deepika had posted it as one of her Instagram stories. Deepika had captioned it as, “After a hard day at work, this is what my little sister sends me!!! love you AP! @anishapadukone.” As a comment to this, Anisha had further written, “True story! Don’t be fooled by all that grace and poise.” 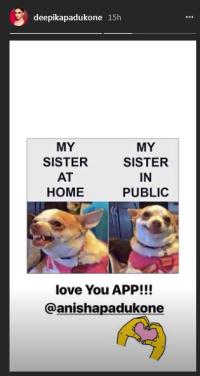 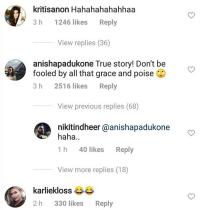 In an event, Deepika Padukone had shared her views on social media and trolling. She had stated, “I'm sure I get trolled but it's not in my nature to react to negative things. Be honest and be real on social media. Also, it is not necessary to engage in every conversation. My social media posts are authentic and mean something to me. Social media is a great way for me to engage with my fans and know what's happening in the world but one must know when to cut off." 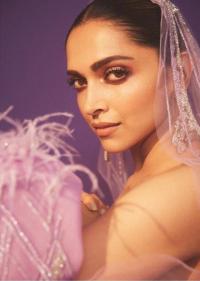 Coming back to the couple, in an interview with the Filmfare, Deepika Padukone had poured her heart out and had spoken about having a permanent roommate like Ranveer Singh, “It’s beautiful living together. I’m sure cynics will say you’ve just gotten married to him, wait for 15 years or 25 years. We’ll figure it out then. For now, it’s the best feeling in the world. I looked forward to living together because I moved out of home at a young age to start working. A lot of my friends used to say we can’t wait to get out of our house. I was the opposite. I got out young. I craved for my family. When we were dating, it was about spending time with his family or going to Bangalore to be with my parents. I’d crave that quality time where you wake up in the morning and have someone to talk to while you’re having breakfast. For the last 15 years, I was alone.” (Also Read: Sania Mirza Photo-Bombing The Perfect Solo Pictures Of Anam Mirza Will Remind You Of Your Sister)

And hardly six months into their courtship, Ranveer Singh had known that Deepika Padukone will be the mother of his children! Yes, this is what Ranveer had shared in an interview, “Six months into the relationship, I knew she was the one. I nurtured the relationship accordingly. It’s been six years now. She’s too good, too lovely. She’s a force of nature. I understood that almost immediately. I’m lucky to have her. I knew all too well that this is the woman I’m going to marry. This is the woman who would become the mother of my children. I’ve been thinking about marriage seriously for almost three years now. I was just waiting, I told her the minute you say so, we’ll do it.”

Isn’t that amazing? How did you like Deepika and Ranveer’s IIFA 2019 look? Keep us posted!