Ranveer Singh and Deepika Padukone had made their first awards night appearance post their marriage at IIFA 2019. Their looks which were full of quirk had immediately caught everyone's attention. Ranveer Singh and Deepika Padukone had shared the screen space for the first time in the movie, Goliyon Ki Rasleela Ram-Leela and trust us, we were swept away by their on-screen chemistry and had secretly hoped for them to be together in real-life. And, our secret prayers were answered in 2018, as the couple had entered the marital bliss on November 14-15, 2018. The lovebirds had kept their relationship a secret, but their chemistry had spoken a thousand words about their bonding.

We eagerly wait for the prestigious award function of the year, The International Indian Film Academy Awards (IIFA). And, this year it was even more special as the awards night was held in Mumbai. #IIfahomecoming went viral as soon as the details of the venue were announced. Award nights are filled with glam and glitz and it is always a star-studded affair. IIFA 2019 was extra special for our newlywed couple, Ranveer Singh and Deepika Padukone as this was their first IIFA together as a married couple. (Recommended Read: Sanjay Kapoor Reveals Sharing Screen Space With Sonam In 'The Zoya Factor' Deepened Their Relation)

Ever since the award night, the internet is flooded with pictures of celebs who attended the show. Deepika has been sharing pictures in her purple outfit and we must say, she looked gorgeous. We have seen Deepika and Ranveer sharing their solo pictures, but we were waiting for them to share their couple pictures (though the internet is flooded with the same). Today (September 21, 2019), Ranveer fulfilled our wish and took to his Instagram stories and shared a black and white picture from the award night and we are awestruck! In the picture, Ranveer can be seen whispering into Deepika's ears and she can't stop blushing. Take a look at the picture: 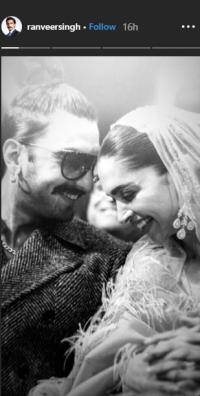 Ranveer Singh and Deepika Padukone have been sharing mushy posts and comments on each other’s pictures giving us some major relationship goals. Recently, during IIFA 2019, an adorable gesture by Ranveer for his wife, Deepika had swept us away. The picture was captured by a paparazzi, in which Ranveer had held Deepika’s long veil as she walking towards her seat. Ranveer was walking behind Deepika, holding her feather veil, as she walked ahead of him, greeting and smiling at people who were coming in her way. Ranveer is surely giving us some major husband goals!

Known for his quirky fashion style and choice of colours, Ranveer Singh had yet again caught our attention with his attire during the event. He had sported a jacket, pants, boots, carried a skull-headed stick from international designers and brands Moschino, Carrera and Franck Muller Geneve and completed his look with a pigtail, glares and neck chain. His look was trolled by none other than his wifey, Deepika Padukone. She had taken to her Instagram handle and shared the picture of her hubby, Ranveer, trolling his IIFA 2019 look, wherein he was sporting a straight pigtail up his head. In a meme which said “Who did it better?”, comparing the pictures of Ranveer’s IIFA look with the character ‘Agnes’ from the film, Despicable Me, sporting a similar hairstyle, Deepika had answered the meme by writing 'Mine' atop the picture and tagging Ranveer in it. (Suggested Read: Kunal Kemmu Shares An Adorable Pic With Inaaya, Says He Likes Himself Better When He Is With Her) 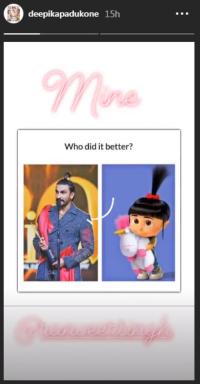 Deepika Padukone and Ranveer Singh’s social media PDA is something to watch out for. Deepika had once shared a mushy picture on her Instagram handle wherein she was holding hubby, Ranveer’s hand. She had captioned the picture as “There’s something so real about holding hands, some kind of complex simplicity, saying so much by doing so little.X.” 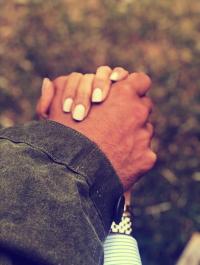 On July 6, 2019, Deepika had taken to her Instagram to wish hubby, Ranveer on his birthday. She had posted a childhood picture of Ranveer and had captioned it as “Sensitive & emotional, caring & compassionate, generous & gentle, funny & intelligent, delightful & faithful. all this and so much more. To my husband, my friend, my lover, my confidante. but more often than not, my child, my infant, my toddler, my dot, my pineapple, my sunshine, my rainbow. May you forever and always be this way. I love you,” followed by a  heart emoji. (Also Read: Madhurima Tuli Shares Full Details Of Physical Fight With Vishal Aditya Singh, Team Had To Intervene) 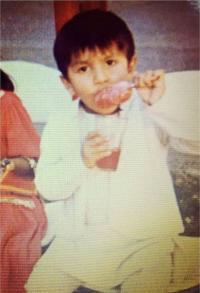 Aww, we can’t keep our eyes away from Deepika and Ranveer. What about you guys? 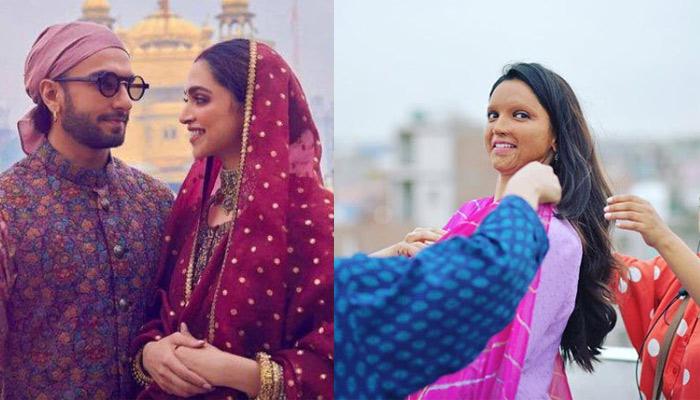