Chhavi Mittal welcomed her second baby, Arham Hussein on May 13, 2019. In her latest Instagram post, she shared some invaluable parenting pleasures.

As some say and many vouch, parenthood truly changes you. Life takes a 360-degree turn from main aur tum to hamare aur hum! And how truly, Chhavi Mittal and her hubby, Mohit Hussein must have felt the same when they experienced parenthood first in 2012, and for the second time in 2019. Both Chhavi and Mohit are avid professionals and awesome homemakers and we have no doubt about it! Right from Chhavi’s pregnancy to birthing, she and her hubby have always prioritised their work commitments, home and also taking care of their then soon-to-be badi didi, Areeza Hussein. (Do Read: Mahhi Vij Praises Hubby, Jay Bhanushali For Being A Part Of Every Sonography, His Reply Is Hilarious)

Chhavi Mittal had welcomed her second baby, Arham Hussein on May 13, 2019. Ever since the baby’s arrival, we all had been containing our curiosity to catch the first-ever glimpse of baby Arham. And it was almost two months later when his star mommy, Chhavi Mittal shared a sneak peek of her little munchkin. The youngest YouTuber, Arham made his digital debut with the season 4 of The Better Half on Shitty Ideas Trending. And trust us you, he is so very cuddlesome! And hence, let us make it a suspense for all those who yet haven’t seen Arham and share some mommy tips with you by Chhavi. 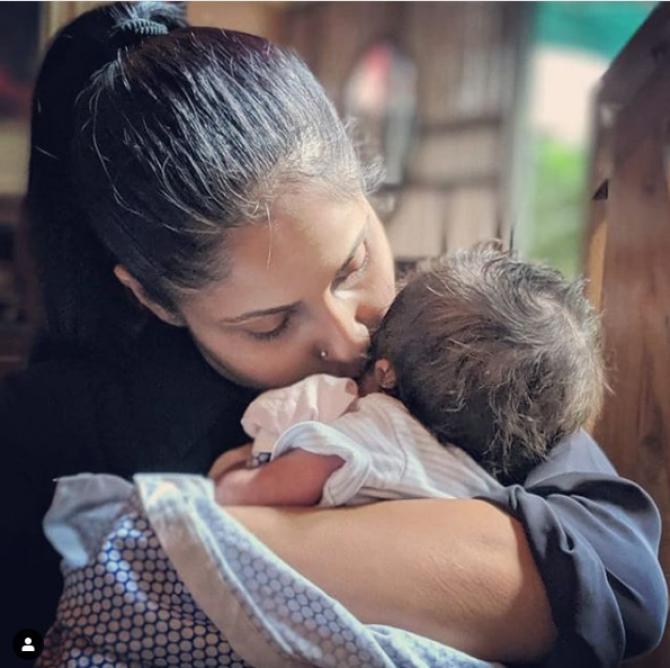 Chhavi Mittal is known for her vocal opinion. Apart from being a successful entrepreneur, she has gained humongous popularity for penning down her entire pregnancy diary on Instagram and the same has continued post-partum too! Just a while back, Chhavi took to Instagram and shared the pleasures of raising a baby. Her note could be read as, “Yesterday I was shooting for SIT's next video, and on set with me was Little @arhamhussein. While even non-parents know how crazy the day time routines with a baby are, not many know how the nights go! After an extremely early (4 am) and extremely long & tiring day of shoot along with severe spam in the back and constant feeding Arham, I was really looking forward to the night.” Chhavi Mittal’s note further continued, “But because most parents are forever exhausted, when the night cry comes, the first response is, what time is it! Next comes, when did he feed last? How much/how long did he feed? And that's followed by, do you think he's hungry? Not possible, it's just been an hour.. maybe he needs a diaper change... Or should I just put him back to sleep? And then both parents keep asking each other if it's possible for the other one to take over... But let me tell you, you find yourself fully awake when you hear the baby gurgle, or see the gummy smile flash at you when you clean his bum bum, and he cycles his legs in the air asking you to play with him. And then, both parents tell each other, you sleep, I'll take over! Pleasures of raising a baby! #baby.” (Also Read: Yeh Rishta Kya Kehlata Hai Fame Priyanka Kalantri Looks Gorgeous In Her Pregnancy Shoot Pictures) 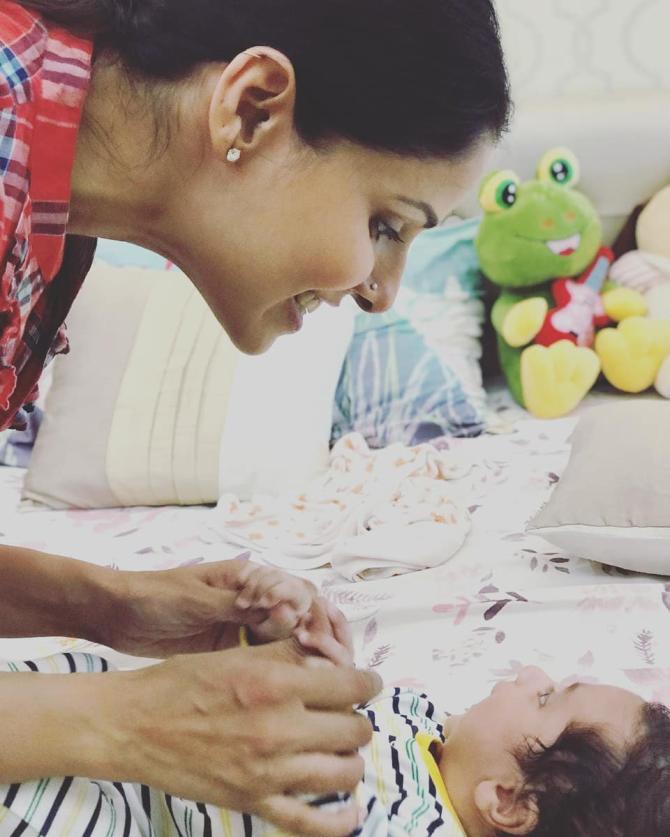 Chhavi Mittals' hubby, Mohit Hussein too, took to Instagram a while back and posting a blurred glimpse of Arham Hussein and wrote, "One significant similarity amongst babies all across the globe is that they have the super power to light up your mornings. Even if they have kept you on your toes through the night after a hard days work it still works. They will light up your mornings no matter what." 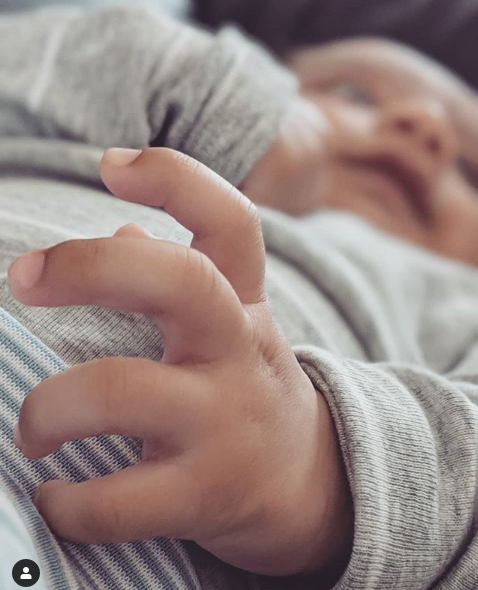 And as we had promised, a day after Arham Hussein made his digital debut, his mommy, Chhavi Mittal shared the first glimpse of her little baby and wrote, “Yesterday was overwhelming. My darling baby @arhamhussein made his debut on SIT! A little something that people don't know about the shoot... we shot for full 12 hours, out of which this little star came on set for all of 5 minutes, and gave us 20 different reactions to insert! Then I took him away to his room, where he slept like a baby (er.. he IS a baby after all). It was almost as though he knew that mom and dad are shooting today and he should stay calm on the sets. He felt uncannily home on a shooting set. Well, thank GOD for that, since just a day before he had cried all day due to colic and we got such a scare that we almost called off the shoot! Since both Mohit & I didn't feel like leaving him or taking him along if he felt uncomfortable. So thank you little Arham for allowing my transition back to shoot to be smooth. You're already so considerate! #littlearham.” Just before Arham Hussein made his appearance on the S.I.T. produced video, his father, Mohit Hussein had taken to Instagram and posted the first-ever proper side glimpse of his little cheesecake. Cuddled in his daddy, Mohit’s arms and gazing into the far-off horizon, all we want is to cuddle this little joy! Sharing the picture, Mohit wrote, “This beautifully captured image by @chhavihussein of me and my LO #BabyArham looking into the future together is just my absolute favourite. Today at 2:30 pm Arham debuts in #SIT with the launch of #TheBetterHalf on #youtube He is the youngest member of the #ShittyIdeasTrending family. A proud #sitian. Hopefully, together we will create a lot of entertaining content. #fingerscrossed #debut #launchpad #launchingsoon #youtubers #youngestyoutuber.” Chhavi Mittal too took to Instagram and shared a picture of little Arham Hussein gazing patiently at the S.I.T. logo. The doting mommy had written, “Little @arhamhussein looking at his brother.. his present.. his future (maybe, but who knows)! He's been on SIT ever since his conception. I was shooting for The Family Vacation in Kasauli when I was 2 months pregnant. Nobody knew since I hadn't announced, but I was feeling all the discomfort, nausea, irritability, backache, tiredness, sleepiness.. and the constant urge to pee.. and only he was there to endure that with me. Secretly, silently, we both started bonded right from then on. And his silent bonding with @shittyideastrending also started from then on. This was clicked on the first day I resumed office, and calmly he stared at the logo as if having his own secret conversation with it, safely, securely protected in dad @mohithussein 's arms. I beam with pride today when he makes his debut on SIT today at 2.30pm on YouTube! My baby, you're our partner in crime, like a twin joined at the hip. Mom, Abu & Areeza love you to bits!#babyarham.” (Must Read: Sania Mirza And Her Son, Izhaan Mirza Malik Mark The End Of Wimbledon 2019 By Relishing A Yummy Cake) Isn’t Arham Hussein super-duper adorable? All that we now wait, is to see a full picture of the awesome-foursome Hussein family soon!