Sania Mirza And Her Son, Izhaan Mirza Malik Mark The End Of Wimbledon 2019 By Relishing A Yummy Cake

Sania Mirza And Her Son, Izhaan Mirza Malik Mark The End Of Wimbledon 2019 By Relishing A Yummy Cake

Sania Mirza has been an expert and analysing the day-to-day action of the Wimbledon 2019 by bringing her wealth of knowledge having played the singles, doubles and mixed doubles formats. 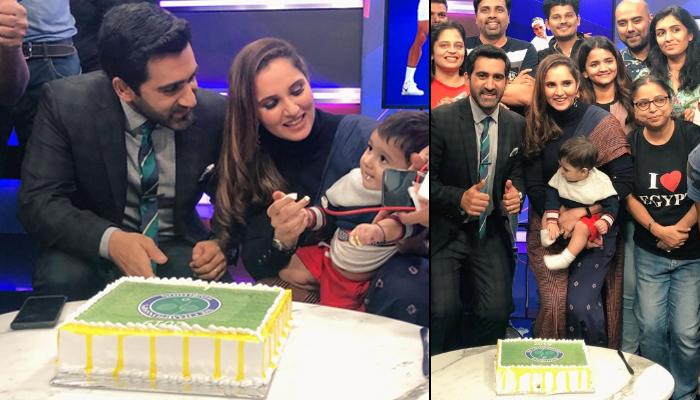 It was in April 2018 when Sania Mirza and Shoaib Malik had announced that she is pregnant, and on October 30, 2018, the Mirza-Malik families were on cloud nine with the arrival of baby Izhaan Mirza Malik. In the last few months of her pregnancy phase, Sania had taken a break from tennis and ever since the arrival of baby Izhaan, her world revolves around her little munchkin. A few months after giving birth to her first child, Sania jumped back to the workout sessions and preparations for the 2020 Summer Olympics. (Also Read: Navina Bole Shares The First Glimpse Of Her Two-Month-Old Daughter, Kimaayra Resting On Her Shoulder)

Be it starting working out just after three months of delivery, taking baby Izhaan Mirza Malik to the tennis court where she has been preparing for her comeback after a short break or the little one accompanying his star mommy on the Star Sports sets where she has been analysing the day-to-day action of the Wimbledon 2019 as an expert, Sania Mirza prefers her little one accompanies her during the professional hours as well. And July 14, 2019, was no different! 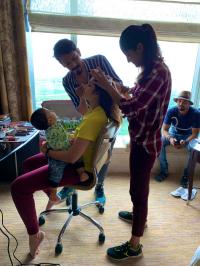 For any sport or even non-sport fan would know about the historic tournaments of cricket (ICC Cricket World Cup 2019) and tennis (Wimbledon 2019) that took place on July 14, 2019, and had nail-biting climaxes. Sania Mirza has been an expert and analysing the day-to-day action of the Wimbledon 2019 by bringing her wealth of knowledge having played the singles, doubles and mixed doubles formats. For the uninitiated ones, Sania is a six-time grand slam winner and former Wimbledon double's champion. Marking the end of Wimbledon 2019, Sania along with her team celebrated with cake and her son, Izhaan Mirza Malik, couldn’t stop eating the yummilicious gateau.

The TV presenter and commentator, Suhail Chandhok gave us a glimpse of the celebrations and tweeted, “Possibly the greatest Sunday of #Sport for a while to come with an EPIC #Wimbledon & #CWC19 #CWC19Final! Amazing end to a very memorable 2 weeks with @MirzaSania & hope all of you enjoyed #MatchPoint @StarSportsIndia as much as we did bringing it to you! Sania, you've been a star.” (Also Read: Karanvir Bohra's Wife, Teejay Sidhu's Life Lesson For Twin Babies Prove What A Doting Mommy She Is) 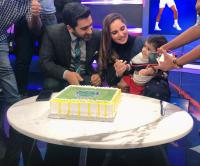 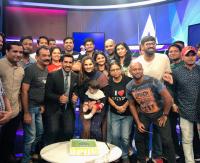 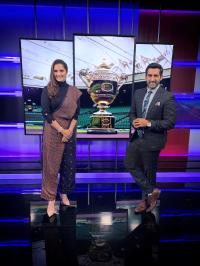 With dedicated and rigorous workouts, on March 10, 2019, Sania Mirza finally had her first informal tennis match in the court after the birth of her son, Izhaan Mirza Malik. Sharing a video of the same, Sania had captioned it, “So, this happened today”, followed by smiling emojis.

In an interview with Filmfare, Sania Mirza had revealed her plans to get back into competitive tennis and had remarked, “My plan is to try and get back whenever possible, but there are many factors that go into post-pregnancy recovery. I am going to take it as it comes. The first goal is to try and regain full fitness, which is not easy, because you have to start working out. Also, there is a timeline to be followed immediately after the delivery, and you can work out only after a few weeks. So, there are a number of things to be decided, but the plan is to try to get back by the 2020 Summer Olympics.” 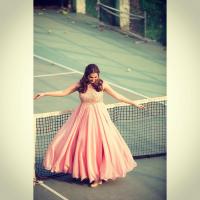 In an interview with the Bombay Times, Sania Mirza had opened up about mommy-hood and the changes that came in her life after she welcomed her baby boy, Izhaan Mirza Malik. And that is exactly where the star mommy had revealed the nickname of her son. She had shared, “I do. Izhaan is seven months old and while he is extremely naughty, he’s also a very intelligent kid. He knows everything that’s going on (laughs!) and can communicate without words, I don’t know how! A lot of people call him Izzu; it is the universal name that everyone — fans, extended friends who don’t know him, and haven’t seen him — automatically call him. But I call him Izzi. Actually, I call him all kinds of things, but yes, I also call him Izzi or Laddoo.” 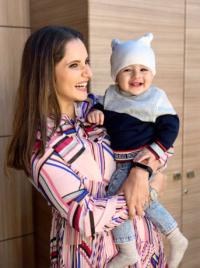 Speaking about her experience of motherhood, Sania Mirza had stated, “Life has definitely changed for the better, for sure. I think becoming a mother has helped me evolve as a person. Of course, small things have changed as well. Like, you don’t think about yourself, it all revolves around the baby now. Everything is about Izhaan and what he wants; what he wants to eat, when he wants to eat, etc, so you automatically take a backseat. Having said that, I’ve got a lot of help, so many loved ones lending a hand, that I still have time for myself as well. And I do think, motherhood has been the most fulfilling experience I have ever had.” (Also Read: Anita Hassanandani Reveals She Will Plan A Baby With Husband, Rohit Reddy Post 'Nach Baliye') Isn’t Izhaan Mirza Malik, a little bundle of joy for not only Mirza-Malik clan but also us? Don’t you agree? In the times of COVID-19, it has become even harder for moms to keep their kids entertained. The pandemic has ruined the fun for the babies as they are deprived of going to schools or take a walk in the open. We are trying to adapt the 'new normal' where handshakes are