Chhavi Mittal's daughter, Areeza Hussein is over the moon with one of the best gifts that her parents haveÂ gifted her in the form of a baby brother. Chhavi shares a brother-sister moment.

When a little dollop of happiness comes into a family, the lifestyle and outlook of every resident changes. While the newbie mommy and daddy will be busy changing their priorities for the little one, his/her dada and daadi will scoop bedtime stories and nuske for their little happiness. A sibling (if any) would ensure that his/her 'other one' remains entertained throughout and make living, a moment of galore for the whole family! Speaking specifically about sibling relationships in here, brothers and sisters go by the saying “teri meri banti nahin par tere bina meri chalti nahi”! True that, we cannot imagine our life without our sibling and we bet, Chhavi Mittal’s little daughter, Areeza Hussein is already feeling alike! (Do Read: Esha Deol Turns Heads With Post-Pregnancy Look At LFW 2019, Walks Ramp With Daughter Radhya Takhtani)

May 13, 2019, was the golden day in the life of every member of the Hussein family when ‘boss lady’, Chhavi Mittal gave birth to her second child, Arham Hussein. Having penned her entire preggy journey, Chhavi continues to do so and shares sneak peeks of her life with her fans every now and then. When a second child arrives in the life of a couple, it is their first child who is utterly elated with the little lub-dub. Similar is the story of Areeza, who is over the moon with one of the best gifts that her star parents have gifted her in the form of a baby brother. Pertaining to the same is another heartfelt post by Chhavi. 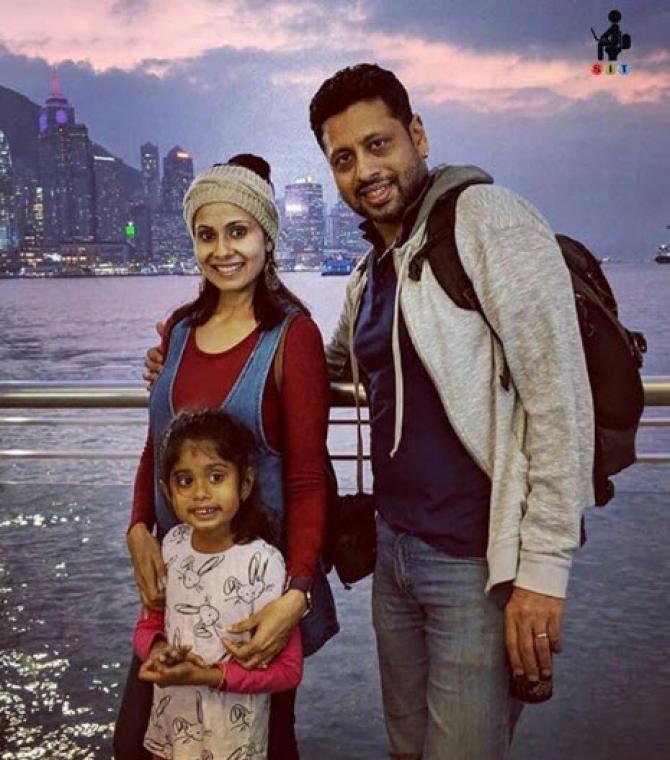 Chhavi Mittal took to Instagram and posted a heart-warming picture of a brother-sister moment, wherein Arham and Areeza were looking at each other with a lot of love and naughtiness in their eyes! She captioned the picture as “The lovely sight I get to see first thing in the mornings. When little @arhamhussein and little @areezahussein just look at each other, smile at each other and shower bliss around. Sometimes she sings to him and he just cannot wipe the toothless smile off his face, his eyes following her around when she's dancing. Is there any other spot in the world that is more beautiful and serene than this one? Why do we search for peace outside, when we are well-equipped to find it right where we are at all times? #recognisingbeauty #blog #blogger #chhavimittal #arham #son #daughter #brothersisterlove #motherdaughtergoals #motherson #peace #peaceful #joy.” 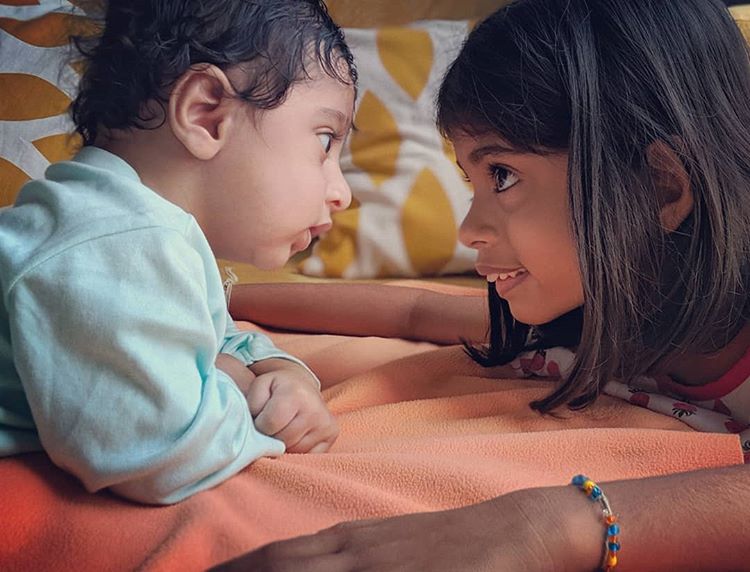 Chhavi Mittal had a difficult pregnancy but that didn’t deter her from working. Soon after she welcomed her little baby in the world, Chhavi had immediately started to work from her hospital bed itself. While her hubby, Mohit Hussein was busy with his hubby and second-time newbie daddy duties, their daughter, Areeza Hussein, had decorated their entire house to welcome her mama, and baby brother, Arham. Sharing a glimpse of the same, Mohit had written, “This is how #BabyArham got welcomed home by his elder sister #Areeza. Just a glimpse into how she decorated the rest of the house as well. Lucky to have her as his guiding angel. Blessed to have Areeza. Welcome home Arham.#completefamily #fatherhood #loveallaround #kids #newborn #familyfirst #siblings #siblinglove #sister #brother.” (Must Read: Sameera Reddy's Husband, Akshai Varde Is The Daddy Cool Of Tinseltown, Plays Guitar For His Girl) 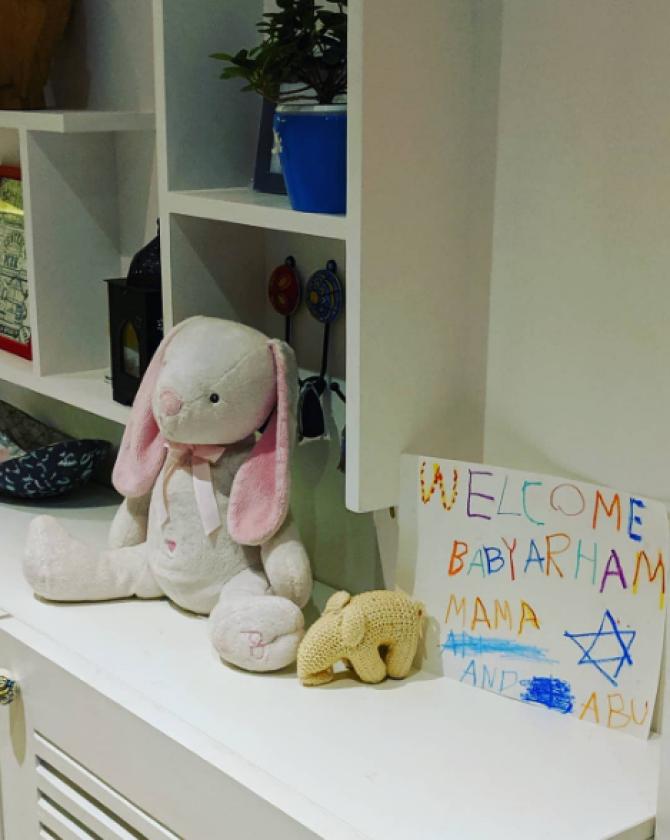 Areeza is an adorable child and even being a kid herself, leaves no stones unturned in her little world of imagination to make her parents feel super-special. This reminds us to share the adorable gesture of Areeza for her mom, Chhavi Hussein’s baby shower. The doting mommy had then shared her entire baby shower story and had penned, “This whole pregnancy has been so damn hectic for me that I have literally had no time to even think of feeling special. But there's one thing I did miss this time. And that is a BABY SHOWER. Normally it's either a sister or a best friend who throws you a baby shower, but I don't have a sister, and my best friend tried to get together with my darling husband @mohithussein to plan one for me, but unfortunately I couldn't take out a day since I had deadlines to achieve before going into labour. But you know how Sharukh Khan said that "poori kaynaat" dialogue? So I think the forces of nature got together and sent an angel from above to throw me a baby shower literally days before my labour would begin!” 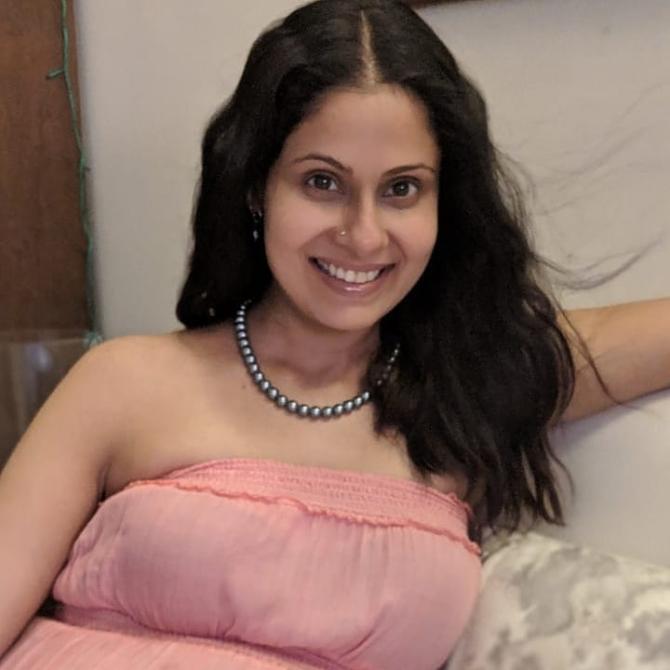 Chhavi Mittal’s post could further be read as “Day before yesterday I got a call from my 6 year old daughter telling me that tomorrow's my baby shower, and that I'm to leave the house at 4 and then come back at 6! My Little fairy had called 2-3 of her other 6-year-old friends, who came and helped her decorate the whole house with coloured tapes, balloons, messages on post-its, flowers and seashells. I was made to wait outside the door for a few minutes because they were not ready... Then I told them that I need to sit, so a cute blindfold (the eye patch I wear to sleep) was put around my eyes & my cutie held my hand and made me sit while they did the last minute finishing touches.. then 5 minutes later they all came and Areeza removed my blindfold while they shouted "surprise" and filled up my lap with little cards full of love and spelling mistakes! It was the biggest awww moment of my life ever!! And I couldn't have wished for a better baby shower!” Chhavi Mittal’s note concluded with, “The people who matter to me the most, and to whom I matter the most were present, and the little human that I made 6 years ago created this special, unforgettable moment for me :)And later she told me, "mama I'll always do this for you, on every special occasion".Was this the best day of my pregnancy... Strike that... the best day in my whole life or what! The fact that I spent the next 2 hours after that cleaning the house and doing pocha is a completely different story though #babyshower P.S. She asked everyone to wear pink.” (Also Read: Jay Bhanushali Narrates His Experience Of How People Still Don't Celebrate The Birth Of A Girl Child) 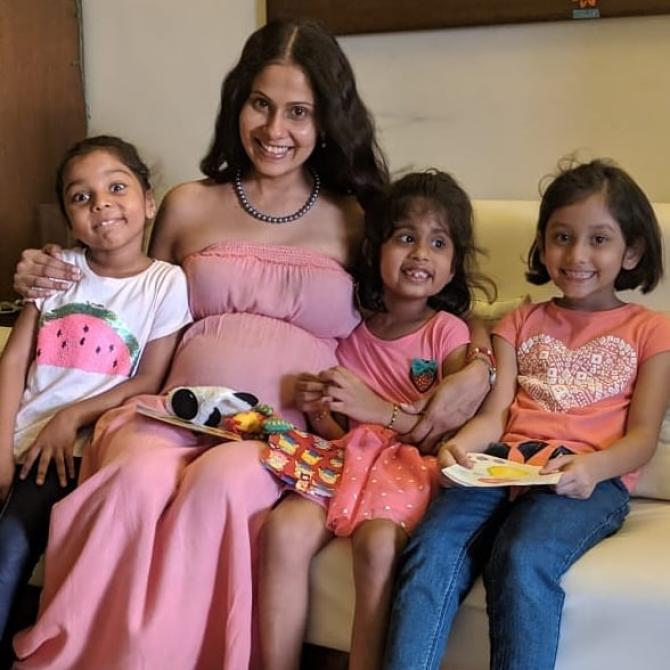 In a chat with us, Chhavi Mittal had shared Areeza Hussein’s reaction to the news of her mommy’s pregnancy, "Areeza was ecstatic when she heard that there is a baby in my tummy. She almost didn't believe me and couldn't stop laughing. She is so excited, she loves to kiss the belly, she loves to feel the kicks. And everytime she feels the kick, she has a really cute expressions on her face and where she is like, "Oh My Goddd!!! And she has a lot of plans for the baby. The toys she is gonna give the baby, the clothes she is going to give the baby. She ideally wants to have a sister, but she is perfectly fine even if it is a brother as long as it's cute and she thinks it's going to be the cutest in the whole world." 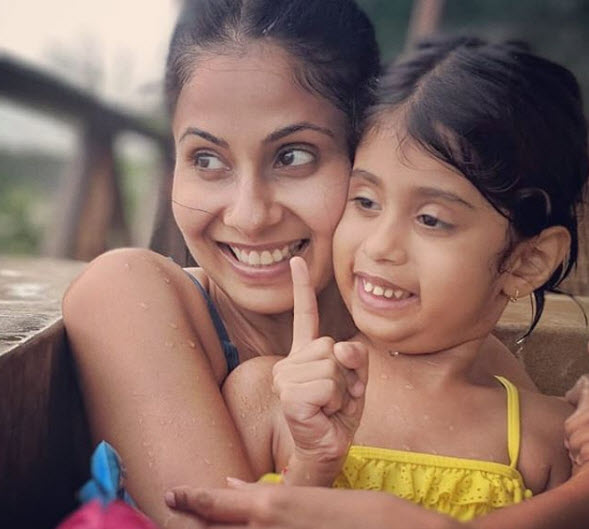 Guys, doesn’t Areeza and Arham’s picture reminds us to video-call our sibling right away? Keep us posted!