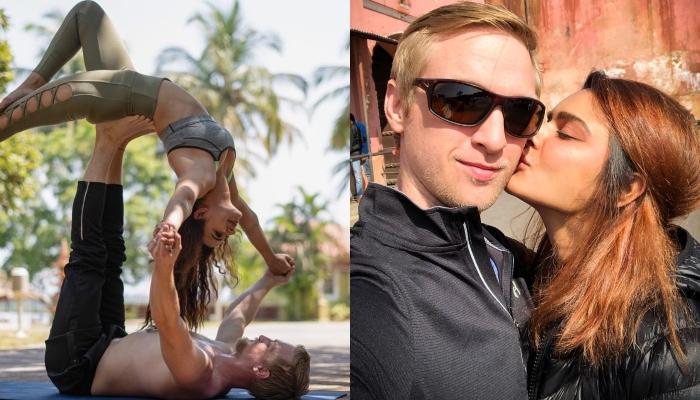 Being a woman is a terribly difficult task, since we are the ones who have to deal with all the societal pressures and wrong notions! However, if you find a special someone that empowers you and helps you achieve all your dreams, then believe us he is worth holding onto. And, television actress, Aashka Goradia’s husband, Brent Goble is a perfect inspiration for all the men in our society. (Recommend Read: Shloka Mehta Looked Stunning In A Pastel Lehenga As She Danced With Her Team On Mehendi [VIDEO])

On the occasion of International Women’s Day, Brent took to his Instagram handle and shared a picture with Aashka. In the picture, we can see the power couple showing off their Yoga skills as Brent lifted her up. He penned a heartfelt message for Aashka, and wrote, “Happy Women’s Day! I was extremely fortunate to grow up surrounded by spectacular women. The most spectacular being my mother. Now, I have the privilege of raising my wife (literally) and bear witness to every barrier she overcomes.” Take a look at the picture below:

Aashka and Brent exchanged wedding vows on December 03, 2017. And they have been giving us relationship goals ever since they started dating. Earlier, in an interview with Humans of Bombay, Brent had revealed his love-story, and had shared, “2 years ago, she decided to fly down to Vegas. On her last night there, she told me later, she felt as though she had to go to Hakkasan - ‘something there was going to change her life.’ And there I was... waiting for my colleagues. When she walked in, I saw her & I just had to approach her. But when I did, she was cautious & cold. So, I kept on talking to her friend until she realised how approachable I was. I guess she couldn’t resist! At the end of the night, we exchanged numbers. Then she had to leave- it was one of those long goodbyes that just keeps you wanting more.” (Also Read: Shloka Mehta's Sister, Mana Mehta Looks Stunning At Former's Mehendi Ceremony, Pic Inside) 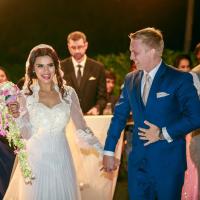 Brent further shared their story and how their families reacted to their match. He had said, “We kept talking for a month, until she decided to visit me again. I’d also just come out of a relationship then, so we were open to exploring this spark between us. She flew in & we spent the week together in Vegas- it was love. Immediately after, I left for Colorado to visit my family. I told my dad ‘I met someone.’ His reaction was ‘Really? Again?’ They wanted me to be cautious after my last heartbreak. But I assured them that they’d love her! So I brought her home to meet my parents. In the 1st 30 mins, my mom took her to our porch to chat & my dad said ‘Oh... she’s different.’ They saw it too!  Later, my parents told us that our relationship couldn’t be an ‘either/or.’ We had to be sure & there couldn’t be a backup. I thought about it- she has a great career, I couldn’t take her away from that!  Besides, why must it be the lady who has to move?” (You May Also Like: Neetu Singh Loves Hubby Rishi Kapoor's New Look, Says The Josh Is Great [Picture Inside]) He had further shared, “So, I decided to move my life around- it was easy because at the end I got to be with her. It took me a month to get things in order. But I did it, & I don’t regret it. I flew down to India & met her family. I expressed my intentions, telling them that Aashka was it for me & they offered me a drink! I was now a part of this big loving family!” 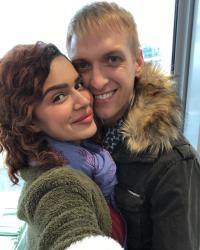 Brent, who is a loving husband, also revealed how he popped the question to Aashka. He had stated, “That year, we flew home for Christmas. I had a surprise planned- after all the gifts were opened, there was a little one hanging on the tree for her. My nephews were waiting with the camera… she opened the box to find my ring inside- she turned around, said ‘YES!’ There it was- the miracles I’d ever dreamed of, all fulfilled in that one moment!” (Don't Miss: Shloka Mehta: Everything About Akash Ambani's Wife-To-Be And Ambanis' Bahu-To-Be)

Well, we love Brent and his way of empowering ladies in his life! What about you?