Heartbroken Boney Kapoor Talks About Life Without Sridevi, Says Past Months Have Been Very Difficult

Heartbroken Boney Kapoor Talks About Life Without Sridevi, Says Past Months Have Been Very Difficult 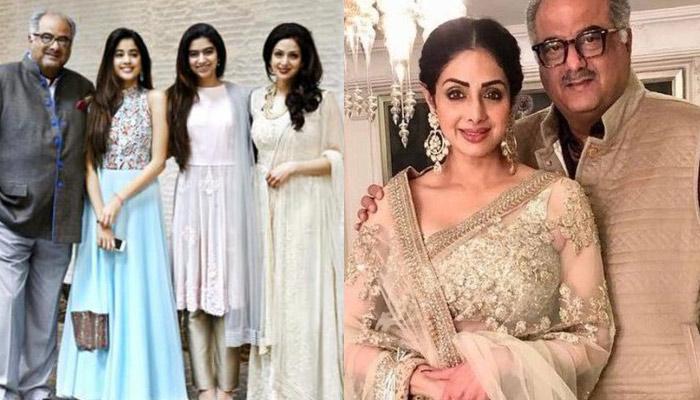 Life is too short, we say it a lot of times, but we get to practically live the real meaning of it when someone very dear amongst us leaves to the heavenly abode. We all know that the ultimate truth of life is death, and everyone would die someday. But when this day comes, it leaves the loved ones into bits and pieces. It is sort of a shock and takes its own time to actually come to terms with it. Something like this happened with Boney Kapoor, Khushi Kapoor and Janhvi Kapoor, when one of the celebrated actresses of tinsel town, Sridevi Kapoor passed away early this year. (Also Check: Boney Kapoor Did The Sweetest Thing When Sridevi Completed 50 Years In Bollywood)

For the unfamiliar ones, Sridevi ji passed away on February 24, 2018, in Dubai, apparently after accidentally drowning in the bathtub of her hotel. Her husband Boney and daughters, Janhvi and Khushi are trying to cope up with this harsh reality and monumental loss. In a recent interview with a leading portal, Boney Kapoor said, “I am trying to be both a mother and a father to my children.”

The heartbroken husband and a responsible father was also quoted as saying, “She was suddenly gone. These past months have been very difficult. Everything went on a freeze-pause in our lives. There were so many things left unsaid and undone. Now I am finally picking up the pieces again trying to put my life together for my children’s sake. There were things that were put on pause. I am trying to resume my life. I am yet to come to terms with the fact that she’s gone forever.” (Don't Miss: Last Video Of Sridevi Dancing With Boney Kapoor, Shared A Warm Moment As He Hugged Her Tightly)

Without any doubt, Sridevi’s loss in Boney and their daughter’s lives are irreplaceable. In fact, when she died, Boney Kapoor wrote a heartfelt letter as a tribute to his late wife Sridevi. He then penned, “Losing a friend, wife and mother of your two young daughters is a loss inexplicable in words. I would like to express my sincere gratitude to my family, friends, colleagues and well-wishers and all of you countless fans of my Sridevi who have stood by us like rocks. I am blessed to have the support and love of Arjun and Anshula, who have been such pillars of strength for myself, Khushi and Janhvi. Together, as a family, we have tried to face this unbearable loss.”

It further stated, “To the world, she was their Chandni the actor par excellence…their Sridevi but to me, she was my love, my friend, mother to our girls my partner. To our daughters, she was their everything their life. She was the axis around which our family ran.” Each and every line, every word depicts how important she was in his life. There is no doubt about the fact that she was the backbone of their family. (Do Check Out: Sridevi Showcased Her Undying Love For Hubby Boney Kapoor At Durga Puja In This Throwback Pic)

We wish and pray that Boney Kapoor, Janhvi Kapoor and Khushi Kapoor come out of this trauma soon. More strength and power to all of them!

NEXT READ: Divyanka Tripathi Once Messaged Ex-Boyfriend Ssharad Malhotra For Help After Her Marriage