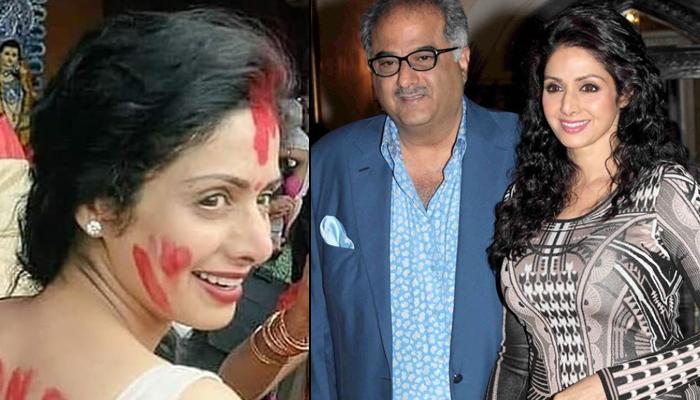 "To the world, she was their Chandni, but to me, she was my love, my friend, mother to our girls, my partner.” – Boney Kapoor. The bond between Sridevi and Boney Kapoor goes beyond any words. The untimely and sudden demise of the actress has left the nation in shock. No one can imagine the grief of Boney, Janhvi and Khushi Kapoor who lost the reason behind their smile. The close friends of the family have mentioned that Boney was “crying like a baby” and is “inconsolable” after his wife’s death.

We got our hands on a lovely picture of Sridevi from Durga Puja in Lucknow in the year 2013. Sridevi is wearing a Bengali saree and is all covered in sindoor as she celebrated ‘Sindoor Khela’ at a pandal. But what made us really emotional is that in this picture Sridevi showcased her love for her husband, Boney. His name is written on her back with the sindoor. Check out the picture here:

Sridevi was quoted as saying, “I've never attended Durga Puja anywhere but since I come from a family that follows traditions and cultures closely, I'm really enjoying this!" Sridevi took her last breath on February 24, 2018, in Dubai, where she went to attend the wedding of her nephew, Mohit Marwah. In all praises of his wife, Boney said in an interview, “There is nothing that she can't do. As an actor her range is limitless. From comedy in Chalbaaz and Mr India to the mellow muted drama of Mom where she lifted a potentially routine story to sublime levels, she is according to me the best actress ever. And I take into consideration all the actresses from the past, present and future. I am pretty certain there won't be another Sridevi.” (Also Read: Last Pictures And Video Of Sridevi From Mohit Marwah's Wedding In Dubai)

He revealed what endeared him the most about Sridevi, and remarked, "I was impressed from the start by the dignity with which she conducted herself. On the sets when she was shooting she would largely keep to herself. But she was never considered standoffish. There was always warmth towards her. What really endeared me to her was that she was down to earth. Success never went to her head. She was always grounded and continues to be. So, commands respect spontaneously. When she enters a room, people stand up for her reflexively."

Boney and Sridevi stood by each other through thick and thin, in their highs and lows they were each other’s strength. Boney revealed in an interview, "She's involved with me every second. She has completely surrendered herself to this role. We trust each other. We are supportive of each other, though most of the support comes from her. She's always prepared to face the consequences of my decisions. My highs are her highs and my lows are her lows. Post-2000, I ran into financial troubles. She stood by me. She even walked barefoot from our home (Lokhandwala Complex) to the Siddhi Vinayak Temple (Prabhadevi) praying for my wellbeing." (Also Read: Last Video Of Sridevi Dancing With Boney Kapoor, Shared A Warm Moment As He Hugged Her Tightly)

Boney and Sridevi have immense love for each other, and nothing can overpower that love in them. Boney gushed, "Sri's a shopaholic but it's not that she buys only for herself. She fends for herself when she shops extravagantly. She understands my financial situation. She gifted me a Porsche on my birthday, something I couldn't afford. I was stuck with my old car for around nine years. We are a normal couple and have our fights. Sometimes she makes up, sometimes I. The love is too immense for the ego to overpower. It finally melts down to agreeing to agree. Like I enjoy watching sports and the news on TV, which she doesn't. But the minute I walk into our room and even though she happens to be watching her favourite show, she'll hand over the remote to me." And finally, he confessed, "If I was Shah Jahan I would have built her a Taj Mahal. If I were a painter, I would have made her a beautiful painting. But, I make movies. Hence, I don't know a better way than the gift of films for her.”

Sridevi and Boney Kapoor’s bond of immense love, trust and altruism is truly an inspiration to all the couples!