Boney Kapoor Fulfilled Sridevi's 25-Year-Old Wish To Return To Haridwar, This Is How

Boney Kapoor Fulfilled Sridevi's 25-Year-Old Wish To Return To Haridwar, This Is How 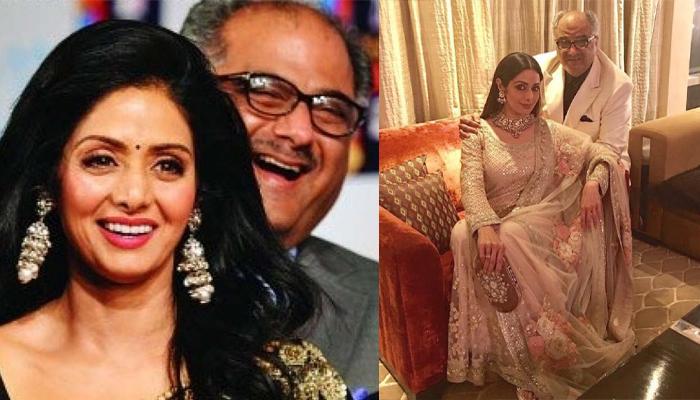 Legendary actress, Sridevi passed away on February 24, 2018, at Jumeirah Emirates Towers in Dubai, leaving her family members and million fans in a complete shock. The last rites of Sridevi were performed yesterday i.e. March 09, 2018 in Haridwar. Her widower husband, Boney Kapoor immersed Sridevi’s ashes in the holy Ganges.

Boney Kapoor was accompanied by his brother Anil Kapoor and designer Manish Malhotra. Apart from a few family members, Rajya Sabha member Amar Singh was also present during Sridevi’s last rites. As per reports, Boney broke down in middle of the rituals as the priests were carrying out their chants at the VVIP ghat in Haridwar.

Earlier the family arrived with two urns of Sridevi’s ashes at the Jolly Grant Airport, Dehradun, and drove to Haridwar in a fleet of cars. In Haridwar, they paid the veneration at the Harihar temple at Kankhal, and they finally immersed the ashes in the Ganges.

Before Sridevi’s last rites were performed, DNA had reported, “Conducting prayers at Haridwar is a significant custom for Hindus, especially for those who are from North India. And Boney wants to ensure that he goes through the rituals at the holy place.” However, apart from the reason of Haridwar’s religious significance, a report in ANI yesterday suggested that the real reason for immersing Sridevi’s ashes in Haridwar is that it was Sridevi’s wish to return to Haridwar. Boney revealed to the ANI that the late actress in 1993 had visited Haridwar during a film shooting and had promised to return to the place one day. Fulfilling Sridevi’s wish, Boney immersed a part of her ashes there.

Last week, a part of Sridevi’s ashes were also immersed in Rameshwaram, Tamil Nadu where Boney Kapoor was also accompanied by his two daughters- Khushi Kapoor and Janhvi Kapoor.

The 54-year-old late actress breathed her last on February 24 which attracted a lot of media attention worldwide. After her mortal remains were kept for examination, it was realised 3 days later and Sridevi’s body was brought to Mumbai on February 28. On the same day, her funeral was performed with complete state honours. She was wrapped in the Indian tricolour.

Boney Kapoor’s gesture of fulfilling Sridevi’s wish is winning hearts all over the internet. This truly shows his deep love for the deceased actress. In a throwback interview, Boney Kapoor had earlier revealed his immense love for Srivdei and it can only be gauged from his statement, “If I was Shah Jahan I would have built her a Taj Mahal. If I were a painter, I would have made her a beautiful painting. But, I make movies. Hence, I don't know a better way than the gift of films for her.”

In another interview, Boney spoke reverently of Sridevi, “There is nothing that she can't do. As an actor her range is limitless. From comedy in Chalbaaz and Mr India to the mellow muted drama of Mom where she lifted a potentially routine story to sublime levels, she is according to me the best actress ever. And I take into consideration all the actresses from the past, present and future. I am pretty certain there won't be another Sridevi.”

Isn’t this amazing? Undeniably, the whole nation is mourning Sridevi’s death, but it’s equally satisfying to see her hubby, Boney Kapoor fulfilling her wish and immersing Sridevi’s ashes in Haridwar as the actress had desired. One of the finest actresses of the Bollywood land, Sridevi, passed away on February 25, 2018, in Dubai in a bathroom tub of a hotel. No doubt, this has created a void in the lives of Boney Kapoor, Janhvi Kapoor and Khushi Kapoor, but her fans have also got hit