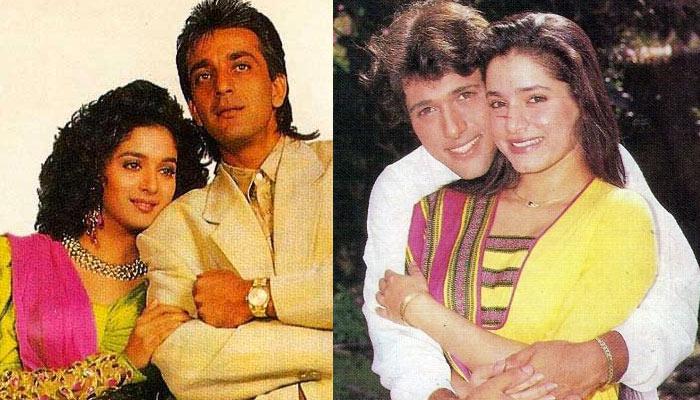 Bollywood is a world of fantasy and we love it. A guy meets a girl, falls in love with her and after a few ups and downs, they get their happily ever after. As much as we love believing that at the end everything works out, the reality is not all flowers and sunshine.

Recommended Read: 8 Bollywood Celebrity Couples Who Never Had Kids Of Their Own After Marriage

Some love stories don’t have a happy ending and the stories that we have for you today fall in this category. Let’s see what went wrong between these stars that their relationship fell apart.

Sanjay Dutt has always been surrounded by controversies. When he was at the peak of his career, the infamous TADA arrest happened. Before that, there were rumours that Madhuri and Sanjay are going strong in their relationship. The couple gave many hits together and were always seen hanging out. They never accepted their relationship but after the arrest, they both went on record to say that nothing was going on between them.

Govinda and Neelam played each other’s love interest in the movie, Ilzaam. The new pairing was an instant hit and became every director’s first choice. Little did the young stars know that they will fall in love with each other in the real life as well. Govinda was head over heels in love with her and wanted to tie the knot but being a mama’s boy, he could not go ahead with his first choice as his mother wanted him to marry Sunita. This was the end of a great love story.

Dev Anand and Zeenat Aman are two names that have been written with the golden pen in the history of Indian Cinema. Dev Anand, in his autobiography, Romancing with Life, has mentioned how he fell in love with Zeenat Aman. At the premiere of the movie, Ishq Ishq Ishq, Raj Kapoor kissed Zeenat Aman which hurt Dev Anand. Zeenat even signed Raj Kapoor’s Satyam Shivam Sundaram which made Dev Anand give up on their relationship.

You May Also Like: 9 Successful Bollywood Directors And Producers Who Are Eligible Bachelors

The Nepali beauty, Manisha Koirala has been one of the most sought-after actresses of Bollywood. Her affair with Nana Patekar came as a shock as Nana had played her on-screen father in the movie, Khamoshi. Nana was already married when he started dating Manisha. The lady wanted Nana to divorce his wife but that didn’t happen, and the affair ended.

Shekhar Kapoor and Shabana Azmi were once very much romantically involved with each other but could not take their relationship to the next level. They met, became friends and fell in love. Soon, they started living together and their relationship lasted for 7 years before the couple separated. They are still good friends.

Dev Anand was a debutant while Suraiya was at the peak of her singing career when the young lovebirds fell in love with each other. It was a beautiful relationship but when it was time to tie the knot, Suraiya could not take a stand for Dev Anand in front of her family. Her grandmother was against this match. Dev Anand tried to persuade her in every possible way, but she couldn’t go against her family’s will.

Must Read: 17 Famous Celebrity Couples Who Had Stunning Destination Weddings

Who hasn’t admired the beautiful pairing of Madhubala and Dilip Kumar? They were one of the most successful on-screen pairs. When the news of them being in a relationship was out, their fans were more than happy but the fate had something else in mind. There are many rumours regarding how the relationship ended but all of them has Madhubala’s father in common.

When it comes to tragic love stories, one cannot ignore the ill-fated love tale of Mahesh Bhatt and Parveen Babi. The couple was so much in love that Mahesh left his wife and started living with Parveen. Things would have panned out differently had it not been for Parveen’s unstable mental condition. Mahesh tried to help Parveen, but nothing worked and Mahesh left Parveen.

Raj Babbar was smitten by the dusky beauty, Smita Patil. They met on the sets of the film, Bheegi Palken and fell in love. Raj left his family to marry Smita. Things were looking well when destiny played its card. Smita died due to childbirth complications which left Raj heartbroken.

Love is a powerful emotion. It has the power to give you wings and to leave you completely shattered. It’s all about destiny. These stars had something else written in their lives which led them and their loved ones on different paths.