Time and again, Bollywood actresses had walked on the Cannes red carpet, donning the six yards of elegance. However, they were also trolled for their overall looks. Read on to know more!

The Cannes Film Festival is one International forum where eminent names from the worldwide film fraternity come together to exchange ideas, sign contracts, view films and get honoured with prestigious awards. It was first held in 1946, and since then, it has been celebrated in the beautiful city of Cannes in France every year. It is said that walking on this annual film festival's red carpet is thought of as an honour for the high-profile actor and actresses of the world of glam and glitz. And each of them prepares for a longer period of time to grab eyeballs with their stunning looks and carry forward the legacy of their respective culture.

Undoubtedly, from time to time, Bollywood stars have also graced the Cannes Film Festival to elevate Indian cinema on the global platform. And reportedly, we have also seen the queens of Bollywood walking on the red carpet, donning the six yards of elegance with utmost pride. They had also managed to hook the audience's eyes on them every time. Though some had liked and supported their concept of eliminating Indianness in their bold saree look, many had also brutally trolled them. Check out some of the saree clad B-town divas getting brutally trolled for their saree look at the festival and their reactions to it.

#1. Deepika Padukone had worn a Sabyasachi Mukherjee's Royal Bengal Tiger saree for her first look at the Cannes 2022 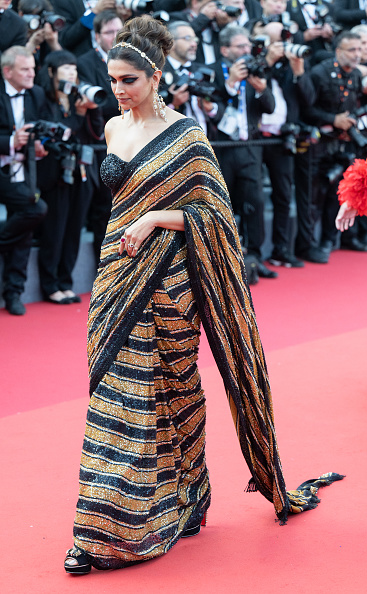 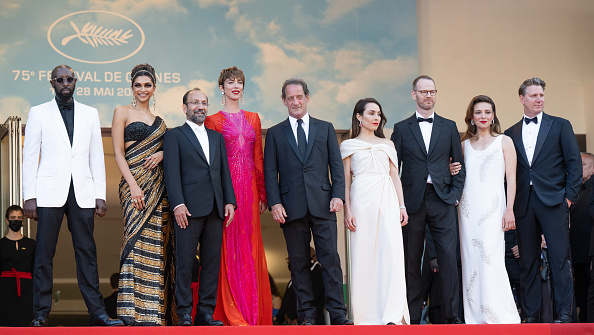 Fashion diva, Deepika Padukone was invited to the 75th Cannes Film Festival, as one of the jury members, representing India. For the first day on the red carpet, Deepika had worn a Royal Bengal Tiger sequinned saree from the shelves of the ace designer, Sabyasachi Mukherjee. In addition, she had accentuated her look with a sheeshpatti, dangler earrings, and bold makeup, including the full eyelid coved with black eyeshadow. As soon as Deepika's pictures had surfaced on the internet, netizens had commented on her look, "Sahi ki kali bili lag rahi hai", "Happy Halloween", and had given a thumbs down for her saree. As per a critics report in the Indian express, her saree was compared to a 'sofa upholstery', and she was also questioned for 'donning this saree which had looked like a thaan, wrapped in metres of unstitched cloth'. However, she has dismissed all such trolling and had mentioned, "India on the cusp of greatness." 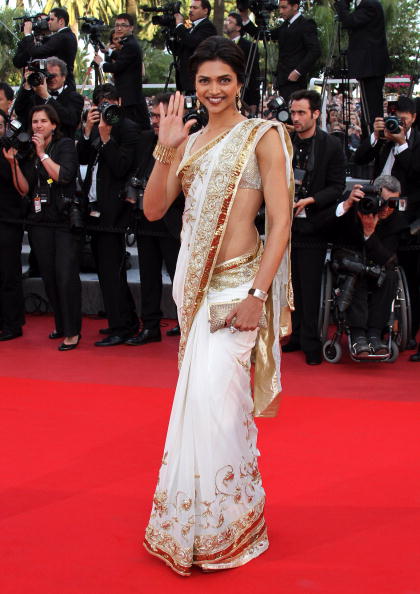 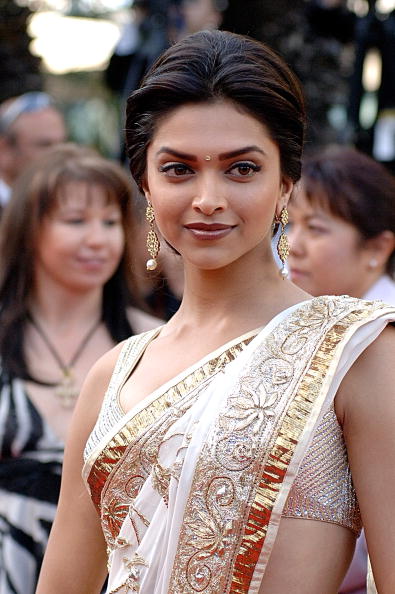 For the unversed, at her debut at the 2010 Cannes Film Festival, Deepika had worn an ivory-hued ensemble from the shelves of the designer, Rohit Bal, adorned with golden work, to walk on the red carpet for the screening of the film, On Tour. She had teamed her look with a golden-coloured clutch, pair of matching earrings and a bracelet.

Recommended Read: Deepika Padukone Stuns At Cannes With Her Jaguar Faced Neckpiece From Cartier, Worth Rs. 44,800,000

#2. Sonam Kapoor had opted for a white jacket lace saree from Anamika Khanna's collection at Cannes 2013 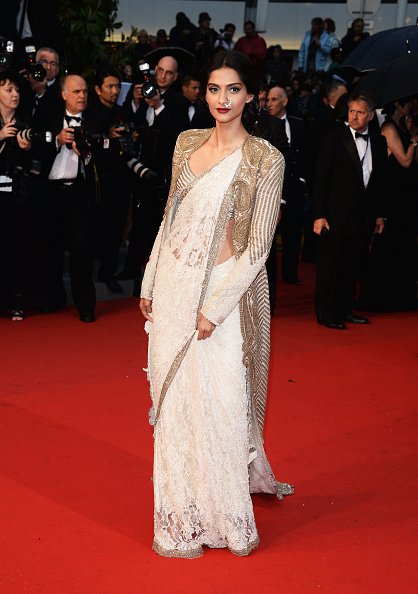 In 2013, Sonam Kapoor had worn a white lace saree from the designer label, Anamika Khanna to walk with pride at the Cannes Film Festival. She had paired her look with a full-sleeved golden embroidered jacket, and a huge nose pin adorned with uncut diamonds. Glossy cheeks, winged eyeliner and bold maroonish lipstick had completed her lookbook. 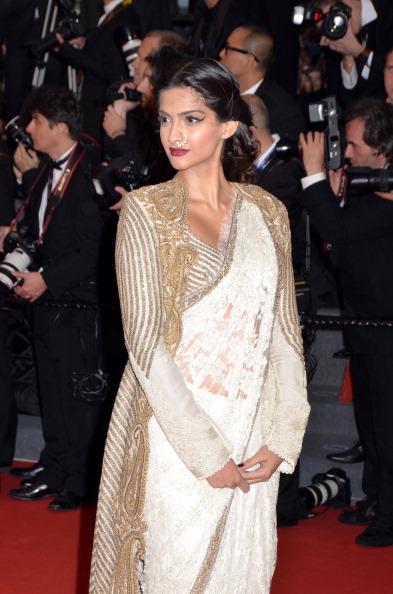 Though her entire look was entirely out of the box for the event, fashion critics had raved about her outfit for a much extended period of time afterwards. Her appearance had also made way for a few hilarious memes. She was called 'buddhi' and 'boring' for opting for such a white coloured ensemble for walking on the red carpet. However, without giving attention to all this, Sonam had also worn many sarees in the next following years. She had attended the 67th Annual Cannes Film Festival on May 19, 2014, in Cannes, France. For the event, in a pale pink Anamika Khanna couture and had looked no less than a true fashionista. She had teamed up her look with mom Sunita Kapoor's choker neckpiece along with pump heels from the designer brand, Jimmy Choo and a clutch from Ferragamo. 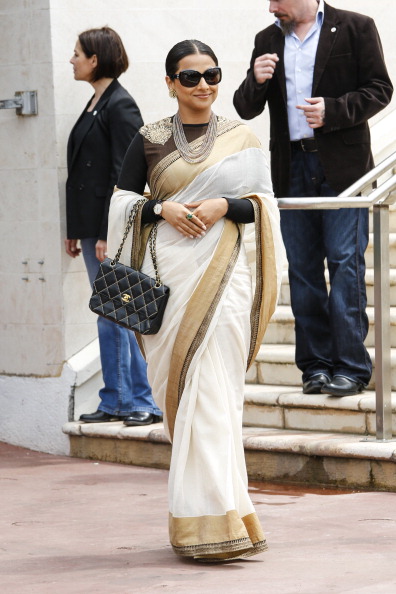 Vidya Balan is one such actress who had faced huge trolling and body-shaming, but almost every time, she had also lashed back equally at them. The year 2013 had also witnessed Vidya wearing a series of sarees at the various events of the Cannes Film Festival, from the ace designer, Sabyasachi Mukherjee. For the unversed, she was invited to the annual film festival as a jury member. But fashionmongers and critics had shown a thumbs down on her looks and had termed them as boring and monotonous. The actress, who is known for hitting back at the trolls, had taken a significant step this time. After all this, Vidya had distanced herself from Sabyasachi and was also heard saying in a few media interviews, "We(Vidya and Sabyasachi) have not been in touch."

#4. Aishwarya Rai Bachchan was badly trolled for her Abu Jani-Sandeep Khosla saree in the year 2012 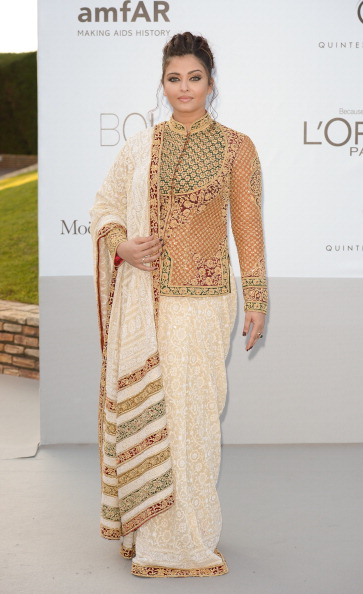 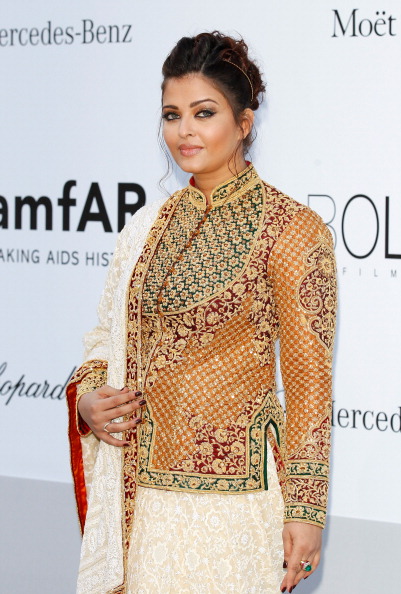 It was post her pregnancy at the 2012 Cannes Film Festival, when Aishwarya Rai Bachchan had graced the red carpet in a cream chikankari saree designed by Abu Jani-Sandeep Khosla. She had paired her saree with a front pallu teamed with long sleeves and a high-collared embroidered blouse. However, her choice had not gone well with the netizens, and her outfits had become a huge topic of controversy then. She was even called a 'fashion disaster' along with other remarks like 'moti' and many more. For the unversed, Aishwarya Rai Bachchan was the first Indian actress to be a jury member at the Cannes Film Festival in 2003. For the event, she had opted for a neon-green coloured saree beautifully styled by keeping a front pallu along with a thin strappy, heavily embellished corset blouse. She had teamed her look with a top knot bun, golden jewellery and sandals. However, her choice of clothes was highly criticised, and she had also hit the headlines for wearing flat sandals on the red carpet. Reportedly, her choice of such footwear was due to an injury to her foot. 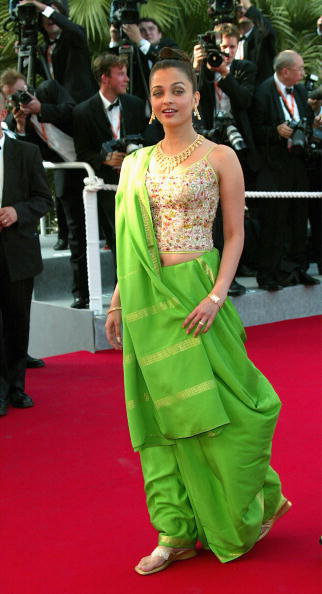 After her wedding, Aishwarya and her husband, Abhishek Bachchan had addressed the trolling in an interview with Rajeev Masand. A fan had asked the actress whether it had hurt her when her Cannes Film Festival outfits were criticised. To this, Aishwarya had shared that she could not understand why there was a 'hullabaloo' about her outfit as she was a judge there, which is a more significant thing. Jumping in between the conversation, Abhishek had shared that he was friends with Aishwarya Rai at that time, and they were co-stars too, and the controversy had made him upset as well. He also mentioned that now as a husband, too, he gets upset when people question Aishwarya for her fashion sense, making the actress and wife say, "Awww." In 1976, Shabana Azmi and Smita Patil had walked down the streets of the Cannes Film Festival wearing sarees on the director, Shyam Benegal's advice. It was since their film, Nishant was nominated for a Palme d'Or award. The saree gimmick had attracted huge attention towards them and also to their film screening, which had recorded a footfall of more than expected.

Well, the saree-clad divas know how to handle criticism with grace very well and are continuously making heads turn at them on the Cannes red carpet every year.