4 Famous And Successful Bollywood Celebs Who Are Proud Single Fathers

4 Famous And Successful Bollywood Celebs Who Are Proud Single Fathers 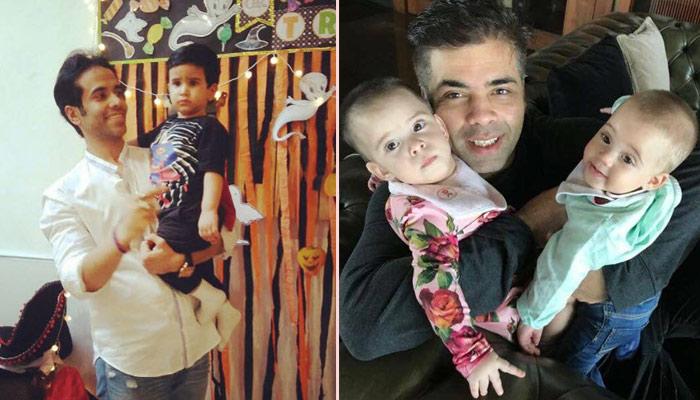 The moment a child enters the womb of a lady, she becomes a mother, but a man becomes a father only after the birth of his baby. For centuries we have been living with the notion that it is only the mother who can understand the needs of her children and take care of them, but the world has changed and so have these notions. These single fathers will prove that dads are just as nurturing as mothers.

Recommended Read: 10 Supermoms Of Television World Who Are Setting Examples For All The Mothers

Karan Johar is the true johari of Bollywood. He has given us some mega-hits, both as a director and a producer. Karan made his acting debut with Bombay Velvet. Karan has been a father figure for many Bollywood celebrities, especially to Alia Bhatt. He has always expressed his desire to become a father. The joy of fatherhood knocked on his doors when twins, Roohi and Yash were born on February 7, 2017. They stayed under observation for weeks because of premature delivery but they finally came home to dad, Karan Johar. The proud father loves to share every moment of his little toddlers on his Instagram handle.

“It’s like a powerful switch has suddenly come on in my life, filling the emptiness in my personal space with new energy. I get teary-eyed just looking at them. It’s surreal to think of them as my daughter and son. It’s daunting even, but in a gorgeous way, when I wake up suddenly at night to remember that I have life breathing in the next room that I’m totally accountable for. My universe was Dad, Mom and films. But now there are Roohi and Yash. My two new friends.”

Tusshar Kapoor, best known for his role as Lucky in the Golmaal franchise, is a single father. He had his share of relationships but the desire to become a father was deeper than the want of being a husband. He became a father through surrogacy. Little Laksshay came into his life in June 2016. Laksshay and Taimur are best friends and are often seen having their cute little play dates.

On the birth of his son, Tusshar shared:

“I am happy that I have taken the right decision. Our family is complete now, we are five now, grandparents, me, my sister and little Laksshya.”

You May Also Like: 8 Famous Celebrities Who Flaunt Tattoos That Are Dedicated To Their Kids

Rahul Dev started his career as a model and soon became every designer's first choice following his chiselled looks. He made his Bollywood debut with the movie, Champion. He played the villain for which he won Filmfare Best Villain Award. He got married in 1998 to Reena Dev with whom he welcomed a son, Siddharth Dev. Unfortunately, Reena left the world in 2009 due to cancer. Since then, Rahul has been taking care of their son alone. He even participated in Bigg Boss to fund Siddharth's education.

Check Out: 10 Celeb Kids Who Look Exactly Like Their Parents' Childhood Pictures

“I am doing Bigg Boss due to financial reasons. I did the show for my son Siddharth who is studying abroad. I need the money to support his education. This time I was offered a good deal so I agreed to do the show.”

Rahul Bose is one of the most versatile actors of Bollywood. He is a writer, director, actor and a Rugby player. He firmly believes in the rights of women and is dedicated to humanitarian work. He adopted 6 children, aged 11, from Andaman and Nicobar Island. He takes care of their education and upbringing. He raised 2.4 million for their education on his own. He is one proud father.

“Earlier this year I was there to welcome Pratima, Rukhsar, Matrena, Bindu, Jinu and Animesh at Rishi Valley (Andhra Pradesh) where they were put for further education. It was an extremely emotional moment in my life.”

These Bollywood dads might not have their respective significant other but in the lives of their children, they play dual the role of a father and a mother. We know that these single fathers are going to inspire other fathers to be more involved in their children’s life. We wish these lovely dads all the best.