These celebrity couples were once head over heels in love with each other but the circumstances were not in their favour. They drifted apart for good. Now most of them are settled down with their respective spouses. 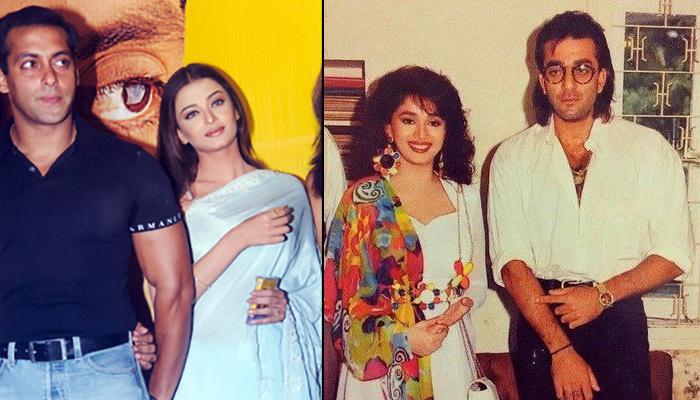 Bollywood is a colourful but notorious place. Its secrets are deeper than the deepest ocean of the world. True, it is a place where dreams come true but it is also the place where some of the deepest desires are shattered. The 90s era was a wonderful time. It gave us some of the biggest blockbusters like Taal, Yes Boss and Dilwale Dulhaniya Le Jayenge and eternal melodies like Pehla Nasha and Wada Raha.

This was also the time that saw many possible couples separating to never look back. Today, we have some of the most scandalous affairs of the 90s which are still green in everyone’s heart:

After Rekha and Big B’s much-talked-about affair, Salman and Aishwarya’s relationship is something that no one can ever forget. Aishwarya signed her first big Bollywood movie opposite Salman Khan. The two fell in love with each other while shooting for Sanjay Leela Bhansali’s movie, Hum Dil De Chuke Sanam. This relationship ended on the worst possible term as Aishwarya accused Salman of violence. She even showed up for an award show with her sunglasses to hide her bruises. Salman didn’t let Aishwarya live in peace for a very long time after their break up.

Sanjay and Madhuri made one of the most loved on-screen jodi of the early 90s. After the death of Sanjay’s first wife, Richa Sharma, Sanjay fell in love with the Dhak-Dhak girl. They were so much in love that many producers asked Madhuri to sign a no-pregnancy clause as everyone was hoping for an early wedding. In 1993, Sanjay was arrested under TADA and that was the end of this relationship.

Akshay Kumar and Raveena Tandon were a serious thing before the Casanova of Bollywood cheated on her. It happened during the filming of their movie, Khiladyon ka Khiladi. Akshay cheated on Raveena with Rekha which caused cracks in their relationship. Raveena wasn’t ready to give Akshay Kumar another chance and the two drifted.

In the 90s, Akshay Kumar wasn’t the ideal husband and doting father that he is today. He was in a very serious relationship with Shilpa Shetty. Their epic chemistry in the movie, Dhadkan made everyone believe that these two are on the verge of tying the knot. That didn’t happen, instead, Akshay Kumar had a hush-hush wedding with Twinkle Khanna.

Also Read: 10 Bollywood Ex-Couples Came Under One Roof For Sonam's Reception, Here's What Happened Inside

Raveena hasn’t been very fortunate in the department of love. After Akshay Kumar, Ajay Devgn too cheated on her. They were in a steady relationship when Karisma Kapoor entered the scene. Raveena wasn’t the one to invite a third person in their relationship and left Devgn. Ajay and Karisma dated for a while before parting ways.

Vikram Bhatt and Sushmita Sen dated through the 90s. Recently, Vikram even admitted it. He accepted that he was going through a rough divorce and found some peace and love in former Miss Universe’s company. The two broke up but Bhatt says that his affair with Sushmita is still close to his heart.

Also Read: 15 Famous Bollywood And Television Celebrities Who Had An Arranged Marriage

Bobby and Neelam Kothari were very much in love and were hoping to tie the knot soon. However, Dharmendra put his foot down for this relationship as he wasn’t in favour of having an actress as his daughter-in-law. Hence, the relationship was forced to end.

Rani and Govinda’s affair started during the shooting of their movie, Hadh Kar Di Aapne. While there is nothing wrong with falling for your co-star, but it is certainly wrong to build a relationship when one is already married. Govinda’s wife, Sunita wasn’t the one to entertain her husband’s ways and threatened to move out. Govinda quickly left Rani alone to save his marriage.

Also Read: 9 Bollywood And Television Celebrities Who Were Engaged But Never Got Married To Each Other

Sajid Nadiadwala received the biggest shock of his life when his wife, Divya Bharti, allegedly committed suicide. He fell in love with Tabu when he was dealing with the death of his first wife. They dated for a while but then Tabu called it off as she realised that Sajid still wasn’t over Divya’s death.

These celebrity couples were once head over heels in love with each other but the circumstances were not in their favour. They drifted apart for good. Now most of them are settled down with their respective spouses and are leading a happily married life. Though this all happened two decades ago, we still remember these infamous affairs.

Next Read: 17 Popular Bollywood Actresses Who Found Love Outside The Industry And Married Rich Businessmen