'Bigg Boss OTT' contestant, Pratik Sehajpal's ex-girlfriend and actress, Pavitra Punia, gives a savage reaction to his 'psychotic' and 'aggressive' claims about her in a recent interview.

Popular director and producer, Karan Johar's much-awaited show, Bigg Boss OTT, is finally here. The show is already living up to people's expectations after witnessing an intense fight between Bhojpuri actress, Akshara Singh and Moose Jattana. Also, Shilpa Shetty Kundra's sister, Shamita Shetty, accused Pratik Sehajpal of instigating people for fights. With all these things going on, the first day of Bigg Boss OTT was packed with controversies and fights.

Also, Pratik Sehajpal's ex-girlfriend and actress, Pavitra Punia gives a savage reaction to his 'psychotic' and 'aggressive' claims about her in his recent interview.

Recommended Read: Virat Kohli Reveals How He And Anushka Sharma Adjust Their Schedule In London To Take Care Of Vamika 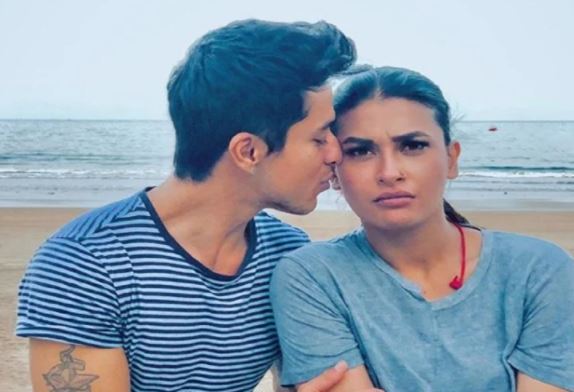 In an interview with ETimes, Pavitra Punia was asked about her ex-boyfriend, Pratik Sehajpal's 'psychotic' and 'aggressive' comments in his interaction with the audience on the premiere night of Bigg Boss OTT. The actress calmly handled the situation and gave a befitting reply to her ex-boyfriend's comments about her. Pavitra clearly stated that she doesn't want to talk about people who don't exist in her life. In her words, "I don't want to comment on this. God bless him. People who don't exist in my life, I don't talk about them." In the same interview, Pavitra Punia was also asked whether she has started watching Bigg Boss OTT or she is waiting for Bigg Boss 15 on television. To which, the former Bigg Boss 14 contestant said that she's not interested in watching this OTT version of the show but also added that her brother is very much interested in the show. She said, "But I think I will watch BB when it comes on TV and that too if I get the time. My brother is a big fan of the show, he watches it. I am glad that I was part of the show in the last season." For the unversed, in an interview with Hindustan Times, Pratik Sehajpal had talked about his relationship with his ex-girlfriend, Pavitra Punia. Talking about the same, he had said, "There is nothing to hide. We were in love, now we have moved on after the break-up. Both of us are happy in life. We have both worked hard to reach where we are in our lives. We have moved on. Both of us have the right to stay happy. I am okay with that (discussion around her). What can contestants do? They cannot shoot me. Even if they shoot me, I am bulletproof." During the premiere night of Bigg Boss OTT, When Pratik Sehjalpal was asked how he would react if Pavitra Punia enters the show as a wild card, Pratik had said, "Dekhi jaegi aur kya (We will see when we come to that). I have not done anything wrong with her, neither did she do anything wrong with me in any manner. (laughs loudly) I do not know why I am laughing, there is nothing to laugh about. Maybe I am imagining she has come in the house and I am right there. I do not know how it will be, but it is going to be fun, I guess." Also Read: 'Dil Chahta Hai' Turns 20: From Aamir Not Being The First Choice To Some Other Lesser-Known Facts

Pavitra Punia is renowned for portraying the character of an evil queen named 'Timnasa' in the popular television fantasy show, Balveer Returns.