In a place where true friendship is unlikely to even flourish let alone prosper for a long time, this friendship day we have brought to you some unusual friendships which are more than a decade old! 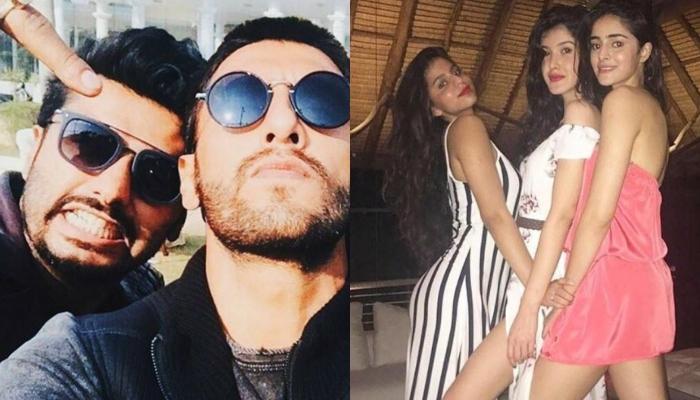 'Aaja mai hawaon pe bitha ke le chalu tu hi toh mera dost hai!' As we celebrate the most celebrated relation from time immemorial, these cliche lines are enough to meausre the girth of friendship, and especially when the friendship is unlikely! What kind of friendship is unlikely? Well, the ones in our Bollywood industry. The Bollywood industry is a very strange place. Here, relations are made and  based on benefits. Having loyal friends for life, who stick with you no matter what, is unheard of, in this industry of throat-cut competition! True friendship here, is something as rare as an oasis in a huge stretch of desert.

(Recommended Read: 16 Bollywood Couples Who Taught Us How To Remain Friends After Breakup Or Divorce)

Even then, there have been some exemplary friendships, in the industry, which have stood the test of time, stereotypes, and adverse situations. These friendships have, time and again, proved that what they say about girls never being true friends, is nothing but a notion, which, its high time now, shall be discarded. This Friendship Day, let us have a look at some of those Bollywood BFFs, who made us go green with envy, with their strong bond!

It would be rather injustice and disrespect to friendship itself, to start this list with anyone other than the gorgeous Kareena Kapoor Khan and her girl squad. A lot of things have changed in the industry over the years, an industry which is known for 'beneficial friendship' and selfishness. At such an adversary place, the more than a decade old friendship of Kareena-Karishma-Amrita-Malaika has stood intact and strong as ever, giving us some major friendship goals.

Recently, amidst the self-quarantine going-on because of the coronavirus pandemic, Kareena posted a collage of all of them, sleeping, with the caption, "Friends that nap together, stay forever."

Many of you might not know this, but bhai and 'Singham' have been friends since ages. While Ajay had done a small cameo in Salman's hit movie, Ready, Salman was seen making a guest appearance and shaking a leg with Ajay in a song for the movie, Son of Sardaar. Ajay and Salman have also worked together in the iconic film, Hum Dil De Chuke Sanam and also in London Dreams.

In a conversation with The Hindustan Times, Ajay had spoken at length about what had kept his friendship with Salman going for a long time. He had said, "The reason is non-interference. Salman and I came into the industry at the same time, and we have been here since the past 25 years. The actors from my generation know that we don't need to mingle in society or party together [to stay friends]. I stand by my friends, and they do the same for me. That's enough."

The most popular star kid, daughter of none other than the Badshah of Bollywood, Shahrukh khan, Suhana is childhood buddies with latest Bollywood sensation, Ananya Pandey (daughter of actor, Chunky Pandey) and Shanaya Kapoor (daughter of actor, Sanjay Kapoor). They are seen hanging out a lot, together, whenever Suhana (who's studying in New-York) is in town. The trio has been friends since they were little kids and their friendship is going strong, as we can see from their adorable pictures together. The fact that The Paparazzi leave them nowhere, whether they go out to dine together, to movies together or party together, tells us about their popularity!

Ananya had even referred to Shanaya as her soul sister, when she had posted a picture of both of them together, on her birthday. Alongside which, she had written, "for me, the sun always shines wherever Shanaya is there. Happy bday to my soul sister, I love u for life papaya #BiggestMess"

(You May Also Like: 'Massis' And 'Buas' Of Bollywood And TV Who Share A Beautiful Bond With Their Niece And Nephew)

Having made their debut in Bollywood around the same time, Alia, Parineeti and Shraddha have been inseparable ever since. It is no less than a treat to everyone's eyes when these gorgeous ladies pose together for the camera. Our social media timelines are filled with their pictures whenever they're spotted on an outing together. The way these girls look after each other is pretty evident from their Instagram comments on each other's pictures and whatnot. This perfect trio sets the example that you can be in the same business, competitors of each other, but still can be good friends!

Who doesn't know the infamous 'gunday' of Bollywood? Arjun Kapoor and Ranveer Singh are extremely close to each other and treat each other as family. So much so, that Arjun calls himself the 'sautan' of Ranveer's wife, Deepika!

Talking about his friendship with Ranvir Singh, Arjun had told Mid Day, "He still gatecrashes my dubbing, sends long voice messages after watching my songs and kisses me on the cheeks. Our connection remains unaffected. I tell Deepika (Padukone) that I am her sautan. We have been consistently warm."

#6. The Supermoms of Bollywood (Sussanne-Sonali-Gayatri)

A friendship as old as theirs is something to hold onto and cherish for life. Bollywood's handsome hunk, Hrithik Roshan's ex-wife, Sussanne Khan, yestertimes actress, Sonali Bendre and Swades fame, former actress, Gayatri Joshi Oberoi have been best of friends, since more than a decade, and their friendship is going as strong as ever. They have always been there for each other in all ups and downs of life, be it Sussanne's divorce with husband, Hrithik, or Sonali's cancer treatment. Sonali, time and again, takes to her Instagram to post pictures with her BFFs. Recently, she had posted this adorable picture with Gayatri Oberoi on her birthday with the caption, "Happy birthday to my numero uno! Love you".

Recently when Sussanne and Sonali were featured on the cover of Femina India, Sonali had written a heartfelt post for Sussanne, which said, "Through the highs and the lows, through sunshine and darkness, through the laughs and the tears... you're always my pillar, always my constant."

One of the most talented actresses of our time, beauty-queen, Alia Bhatt, is best friends with Akanksha Ranjan and Anushka Ranjan since they were kids, and their pictures together have given us some major #womance goals, time and again! Alia Bhatt had even posted a lovely throwback picture with Akanksha Ranjan, when they were little kids, on her birthday with the caption, "happy birthday my everything".

Alia Bhatt had posted a video with her squad, on her birthday, which had gone viral on the internet in which she was seen taking a viral TikTok challenge with her BFFs, and acing it like a pro! Have a look.

Bollywood superstar, Shah Rukh Khan's darling wife and interior designer, Gauri Khan is best buddies with Sussanne Khan. They have been friends since a very long time and their friendship has withstood every test with time. The strong bond shared by these ladies are pretty evident from their social media posts time and again, when they flaunt their friendship with adorable pictures. When Gauri Khan had turned 48, Sussanne had posted a lovely collage of their memorable moments of friendship on her Instagram handle with the caption, "To my dear G...Happy happiest Happiness N crazy amounts of love surround you today and for always.. love you p.s from bad hair days to crazy times salute to us #no8gals"

Ranbir Kapoor and Ayan Mukerji are close buds since the two had worked together in the latter's directorial debut, Wake Up Sid in 2009. Ranbir Kapoor does not have an official social media account; however,  the posts on Alia Bhatt and Ayan Mukerji's Instagram handles are enough of a proof of their camaraderie.

Lucky are those who have friends, for life becomes a little more happy and wild with them. Here's wishing a very happy friendship day to you!

Do you also know any of such BFFs in Bollywood? Let us know!