Karisma Kapoor and Kareena Kapoor Khan's cousin, Armaan Jain got engaged to his longtime girlfriend, Anissa Malhotra yesterday. Checkout the pictures of the engagement inside. Wedding bells are ringing out loud in the Kapoor khaandaan! Well, Karisma Kapoor and Kareena Kapoor’s darling cousin, Armaan Jain is soon going to become a dulha. Yes, the wedding is taking place in the Jain family, but the Kapoors can’t hold the excitement and will celebrate with all the shor-sharaba. Let us make it clear to all of you as to how Armaan Jain is related to the Kapoor family. The handsome hunk is Bebo and Lolo’s bua, Rima Jain and her husband, Manoj Jain’s son.

For the uninitiated ones, Armaan made his sweet step into the world of cinema with Lekar Hum Deewana Dil in 2014. Unfortunately, the movie was a dud at the box office and had failed to impress the audience. Talking about the failure of his debut film, Armaan had once shared that he had learnt a lot from his first movie and realises where he had gone wrong. (Also Read: Sonam Kapoor Ahuja Gives A Pleasant Surprise To Anand S Ahuja On His Birthday Last Night [PICTURES]) 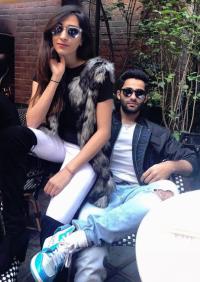 Nonetheless, Armaan Jain is riding high in personal life these days. Armaan has been dating girlfriend, Anissa Malhotra (who happens to be a lifestyle blogger and stylist by profession) for a longtime and finally, on July 30, 2019, he had popped the question to her. And as expected, he got a big ‘Yes’ from her! The first pictures from the engagement ceremony were shared by none other than Karisma on her official Instagram handle. Armaan and Anissa appear to be standing in a balcony with an array of roses around them. While he looked dapper in a black jacket and black pants, Anissa, on the other hand, looked gracious in a black floral dress, which she teamed up with a pair of brown wedges. Take a look: 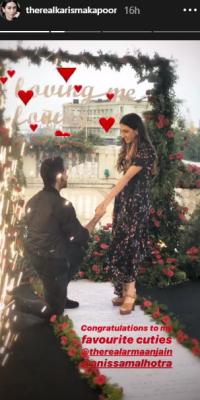 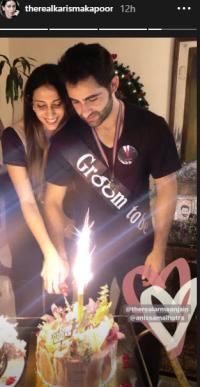 In an interview with a leading daily sometime back, Armaan had talked about Kapoors and the fact that they are synonyms to food. He was quoted as saying, “In Kapoor family, we talk only about food, not about acting. Every time when the family is together, we pull each other's leg. There is only noise and food pollution in the Kapoor family. It is a mess, but it is lot of fun. No one talks about acting or films. But everyone is acting by screaming, jumping and doing melodrama." (Also Read: Anita Hassanandani Reveals The Main Reason For Participating In Nach Baliye 9 With Hubby Rohit Reddy) 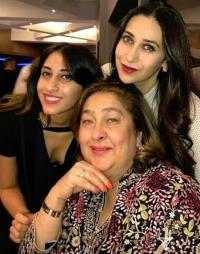 In the same interaction when he was probed further to tell is he feels pressurised coming from a family of actors, he had replied, "I am very proud, it is an honor to be promoted as Raj Kapoor's grandson. I feel I am lucky to be associated with this name and the family. I do get scared at times of this name. I hope I get it right. But I don't take it as pressure. I will do all the hard work and give my best.” 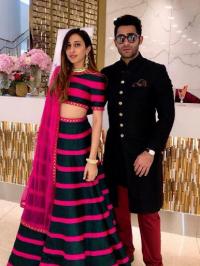 Talking about his normal upbringing, he had gone on to add, "While I was growing up there was nothing related to films. I hardly saw movies. I think it (surname) can give you an opportunity to meet people. After that everything is in your hands. We are very close-knit family we all love each other. I don't see any disadvantage in being associated with a film family. My high was to entertain people, make them laugh. I felt the best platform to make people smile was to either become a joker or get into movies.” (Checkout: Chhavi Mittal Once Again Reveals Some Amazing Baby-Secrets, Shares They Can Feel Good Or Bad Touch)

Talking about his sons, Adar Jain and Armaan Jain, Manoj Jain had once shared with the DNA that they don’t discuss films when at home. On similar lines as that of Armaan, the family relishes food. The doting daddy was quoted as saying, "The wonderful thing is that – I have been married in this family for 26 years, but we don't discuss films when brothers and I meet. We enjoy food and that's more important. I have two boys who are already in this space – Armaan has done one movie, Adar is working as an assistant director and Armaan hopefully will take his second project shortly. I really don't understand the space.” 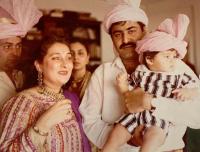 He had further gone on to say, “I have always told both my boys that investment banking is people's business, it's very specific. I told them since they were young that they'll have to find their own genre. They found the film genre so it's for them to choose really which way they wish to go in life and work hard at it. Whatever space you are in – it's hard work and perseverance that pays off. It's not the space I understand fully to guide them. Of course, we discuss the basic genre of the movie, the target audience etc. The rest of the details are left to them." (Do Read: Divya Agarwal Is Proud Of Her BF Varun Sood For His Latest Achievement, He Calls Her His Lady Luck)

In an interaction with The Times of India, Armaan Jain had shared the point in his life when he had decided to become an actor. He had talked about his educational journey and how films happened to him. Armaan was quoted as saying, “After school, I went to Regents College in London for my under-graduation to take a business degree. While I always knew in my heart that I wanted to be in films, I didn’t have the guts to tell my parents that, then. I topped my class in the first year but felt that I was wasting time and money there.” 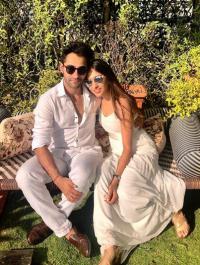 He had further added, “I actually wanted to come back and start working in films. In between my semesters, I got the opportunity to meet Karan Johar in Mumbai, who was then directing My Name Is Khan. I went to him and he took me as an assistant director under him. I told my parents that I wanted to drop out of Regents. I went around in circles in front of my parents telling them that, but, surprisingly, they were fine as long as I was going to give my 100% to what I was going to do. I assisted for three years in Dharma and worked on I Hate Luv Storys, Ek Main Aur Ekk Tu and finally SOTY. I got passionate about direction and was struck by camera.While assisting on SOTY, Abhishek Varman and me became really good friends.” 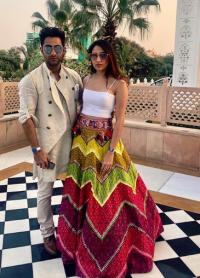 And had further gone on to share, “So, when Arif Ali was looking out for a new person, he referred me to him. I was auditioned three times before I was finally selected. When I was young, I used to watch a lot of my nana's movies. It would be either watching football or cricket or his movies. He died before I was born, so I always wanted to know who my grandfather was. I had a birthday party when I was two. I love jokers and my mom did a clown party for me. I must have watched Mera Naam Joker 50 times. Since I did not see my grandfather, I somehow believed as a kid that the joker in Mera Naam Joker was my grandfather. I always loved the joker and in school. I would always do things that were stupid and crazy and make people laugh. That was my high. I wanted to always entertain and be that centre of attraction and knew that the best platform for me was movies.” (Checkout: Ayushmann Khurrana Talks About How His Stardom Came At A Price As He Hardly Gets Time For His Family) 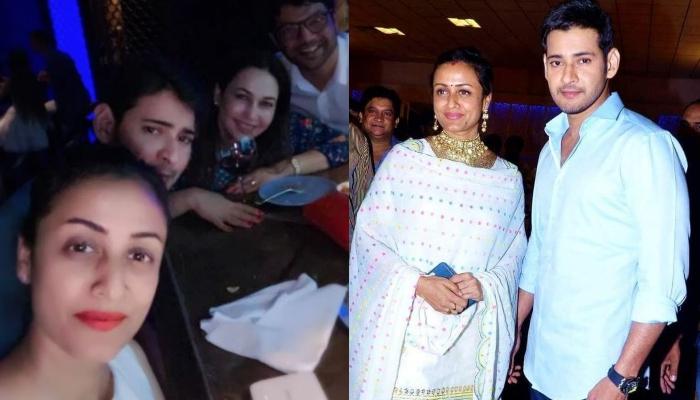 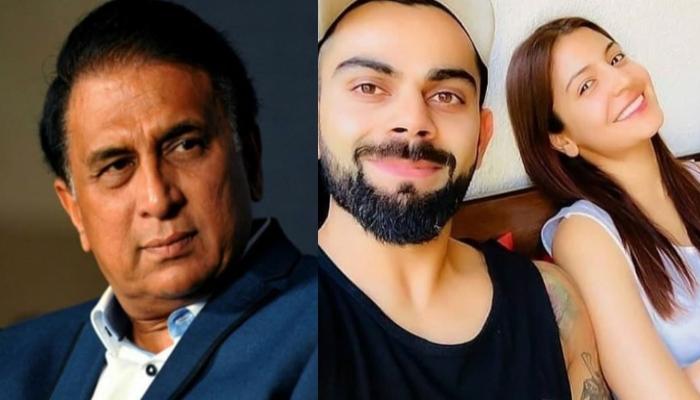