Arjun Rampal was spotted strolling with his girlfriend, Gabriella Demetriades and son, Arik Rampal out and about in the city. Check out picture inside!

Aren’t we all bored and tired of staying at home due to the on-going pandemic? Yes, we are! The pandemic is here to stay and we all have to learn to live under these circumstances only. Earlier, it was the lockdown situation, but now, with the unlock happening in a controlled manner, people have started stepping out, meeting with their dear ones and roaming around. Of, course, all this is done keeping the rule of a mask, sanitizer and social distancing in mind. A lot of celebrities are spotted going out, and now, it is Arjun Rampal, who was spotted with his girlfriend and son out in the city. (Also Read: Rubina Dilaik Talks About Her Pregnancy Rumours, Says Fans Might Not See Her This Year In Serials)

Arjun Rampal had introduced his girlfriend, Gabriella Demetriades to his fans on April 23, 2019, with a monochrome picture. Not just he had introduced his girlfriend to the world, but also had announced the arrival of their baby, as he had captioned the picture as “Blessed to have you and start all over again...thank you, baby, for this baby". On July 18, 2019, Arjun and Gabriella had welcomed their little baby and had named him, Arik Rampal. Though the two have not revealed their baby’s face, often they give glimpses of their baby boy. Now, the family of three is spotted strolling out and about in the city.

Viral Bhayani spotted Arjun Rampal with his beau, Gabriella and son, Arik Rampal in the city a few hours ago. Taking to his Instagram handle, Viral shared a collage of pictures in which we can spot the family. On the left-hand side picture, we can see Gabriella in her comfort outfit, wearing a mask, walking while holding her bag. In the other two pictures, we can see Arjun Rampal holding his son, Arik, while Gabriella looks like moving ahead to run the errands. Along with the picture, Viral wrote, “#arjunrampal with son and girlfriend #gabriellademetriades today in Bandra #viralbhayani @viralbhayani.” Take a look:

As we said, the couple has not revealed the face of their baby yet and we are hoping to see him on his first birthday which is soon. On July 3, 2020, Gabriella had taken to her Instagram handle and had shared a picture of her munchkin, Arik. In the picture, the mommy and son had twinned in grey track pants, and little Arik had looked like a cupcake as he was busy looking at something in his mommy’s phone. One look at this adorable picture will make your day. Along with the picture, Gabriella had written, “My man and I.” 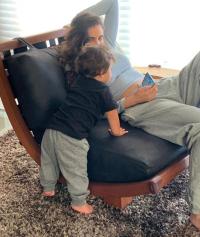 Arjun Rampal, during an interview with the Hindustan Times, had shared how he had met Gabriella for the first time. Arjun had replied “Ah, that’s a question to ask. We met through common friends. So, what can I say? That she stalked me? Wishful thinking that, buddy! It’s only been a year since we started dating and here we are. For keeps. And I must add that it was of prime importance that my daughters should accept her as part of the family. I’m blessed that they have, no questions asked.” (Don't Miss: Smriti Khanna's Baby Girl, Anayka Gives Adorable Expressions To Her Mommy And Daddy's Prank War)

Earlier, in an interview with Zoom, Arjun had opened up about his newborn baby, Arik, and whom he looks like the most. He had stated, "He's the cutest baby I have ever seen. Not taking away from my daughters but he is really really cute, and my daughters are in love with him. Whoever sees him falls in love with him. So, he is actually stealing too much of my spotlight. I'm a bit jealous of him. I would like to share a pic of him when he is one year old. Because he is very small right now and I am too private. Right now he looks more like his mom (Gabriella)." (Recommended Read: Sara Ali Khan And Her Brother, Ibrahim Ali Khan Were Spotted Cycling On the Roads Of Mumbai) 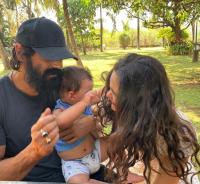 We hope you are also taking the necessary precautions while stepping out!