Arjun Rampal’s daughters from his first wife, Mahikaa Rampal and Myra Rampal have been constant pillars of strength for their father. See how they've turned 'baby nannies' for their half-brother. 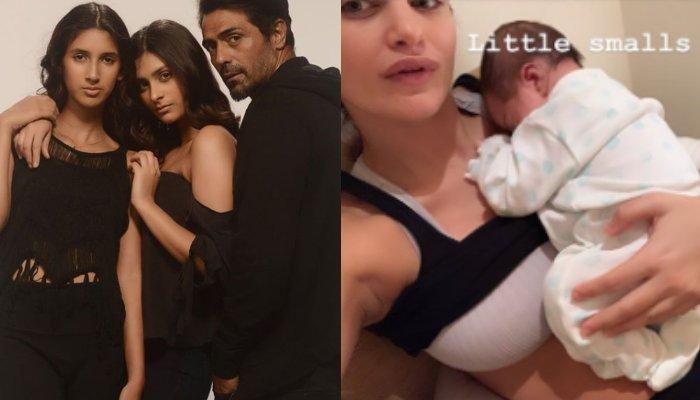 If you want to know how to 'not be' awkward when relationships complicate, take a cue from our favourite Bollywood celebs! The bond that forges between half-siblings, step-children and their step-parents in the industry is extremely cool and make us want to value every relationship even more. The very thought of it reminds us to share with you, yet another instance of how supportive Bollywood superstar, Arjun Rampal’s daughters (Mahikaa and Myra) are when their daddy embraced parenthood for the third time with his girlfriend, Gabriella Demetriades. (Do Read: Aayush Sharma Indirectly Confirms Wife, Arpita Khan Sharma's Pregnancy, Posts A Cryptic Comment)

On July 17, 2019, Gabrielle Demetriades was admitted to the hospital and her boyfriend, Arjun Rampal, along with his daughters, Myra Rampal and Mahikaa Rampal, had come down for a visit. And just a day after, on July 18, 2019, Arjun and Gabriella had become proud parents to a baby boy, whom they had later named, Arik Rampal. Renowned filmmaker, JP Dutta's daughter, Nidhi Dutta had made the announcement on Twitter with a picture, as she posed with the super-elated third-time newbie daddy. In a congratulatory post for the newbie parents, Nidhi had tweeted, "Congratulations @rampalarjun on the arrival of your bundle of joy! God bless!"

Ever since baby Arik Rampal came into the life of Arjun Rampal and Gabrielle Demetriades, the duos has been upping their Instagram story game and often share sneak peeks of their parenting life. Gabriella also keeps on sharing glimpses of how happily have Arjun’s daughters from his first wife, Mehr Jesia, accepted their half-brother. In a recent Instagram story shared by Gabrielle, Mahikaa and Myra turned into ‘baby nannies’, who were taking care of the little one. If you notice closely, you will also see a vague, full-face glimpse of Arik! Here’s the picture:

A few days back, Arik Rampal had celebrated his first Raksha Bandhan with his half-sisters, Mahikaa Rampal and Myra Rampal. Their daddy, Arjun Rampal’s ladylove, Gabriella Demetriades had taken to her Instagram story and had shared a drool-worthy image of Arik’s half-sisters lovingly peeking at their half-brother. She had written the words, “@arikrampal119’s first Raksha @rampal172” atop the picture. While Arik’s face was concealed with an Instagram sticker which had read “King”, it is through the very picture that we got a peek-a-boo of Arik’s royal, blue baby cot! Here, take a look at the same:

Arjun Rampal’s daughters from his first wife, Mehr Jesia, Mahikaa Rampal and Myra Rampal have been constant pillars of strength for their father. When their father’s ladylove, Gabriella Demetriades was admitted to the hospital for delivering her first baby, the beautiful girls were always spotted by their star father’s side. Paparazzi had always snapped Arjun with his daughters, coming out of the hospital post paying Gabriella a visit. (Must Read: Sushmita Sen's Birthday Wish For Her 'Gift' Alisah Proves How Ecstatic She Is On Her Turning 10)

Arjun Rampal and his girlfriend, Gabriella Demetriades had welcomed their lovechild, Arik Rampal on July 18, 2019. The duo is already seen breezing through their phase of parenthood and often share close-ups of their son, Arik on social media. Hardly a week back, Gabriella had taken to her Instagram story and had posted the first full-length proper side glimpse of their newborn son. The little one was cuddled in his mommy's arms and we can say without an iota of doubt that he is extremely adorable! In the picture, atop her little baby, Gabriella had written, “Little smalls” and beneath her image, she had written, “I am a snack”.

It was in April 2019 when Arjun Rampal had shared the picture with his then heavily pregnant girlfriend, Gabriella Demetriades, which had served as an official introduction of his girlfriend and also her pregnancy post. As soon as the post burnt the internet, tonnes of congratulatory messages from fans and his friends from the industry had started to pour in. This had made us wonder if his estranged wife, Mehr Jesia and their two beautiful teenage daughters, Mahikaa and Myra knew about the same then. As per a Mumbai Mirror report, Mehr had taken the news of her ex-hubby, Arjun embracing fatherhood again in a positive stride. The report had stated, “The couple did their best to keep the pregnancy under wraps for the last six months. It turns out that several of their friends were kept in the dark too, including Mehr Jesia, Rampal’s wife of 20 years and mum to their two daughters, Mahikaa, 17, and Myra, 13.”

The report had further added, “Mehr has in fact taken the news rather sportingly. Her friends say that even though they haven’t filed for divorce yet, Mehr has come to terms with the fact that Rampal has moved on personally.” A friend close to Mehr had shared with the same tabloid, “They are still working out the financial terms of the separation. Mehr is a wonderful mother and wants to do what works best for her children.” (Also Read: Saif Ali Khan Puts An End To Rumours Surrounding His Son, Taimur's Debut, Says, 'No Chance')

Arjun Rampal, in an interview, had once talked about fatherhood. Bollywood’s Daddy had said, “I used to think I’d be that father who’ll sit with a shotgun at the doorstep. But both of them are extremely responsible and very dignified in the way they conduct themselves. I’m very proud of them.” He had also added, “As a father, all I can do is hope that nobody breaks their heart.”

Doesn’t the picture of Arik, Mahikaa and Myra speak volumes of love? Keep us posted!