Ever since little Arik Rampal had entered the world, his parents have been sharing his glimpses with their fans. Today, Gabriella shared glimpses from their beachy vacation and they are adorable.

When a couple welcomes their little munchkin in their lives, everything starts to revolve around him/her. Their lives change completely and they start to understand the real meaning of responsibilities. Newbie-parents try to understand the real meaning of parenting and learn from the experiences of others. It is rightly said that until and unless you become a parent, you never understand the real sacrifices they make for us. A couple’s entire focus shifts from themselves to their newborn and they start to plan and prepare everything keeping in mind their little munchkin. (Recommended Read: Arjun Kapoor Trolls Sisters Janhvi, Anshula, Shanaya With A Kapoor FamJam Pic And It's Hilarious)

Bollywood’s handsome hunk, Arjun Rampal and his ladylove, Gabriella Demetriades are enjoying their new phase as parents to a lovely munchkin, Arik Rampal. Arjun and Gabriella had welcomed their little wonder in their lives on July 18, 2019. Arjun had taken to his Instagram handle and had shared the name of his baby boy. He had shared a picture of his hands and had written, "That gracious thing made of tears, of happiness, gratitude, and light. A rainbow appeared in our lives. So blessed we feel gratitude and abundance of joy. Welcome junior Rampal, into our lives. Thank you all for your graciousness, love and beautiful wishes. Say hello to baby Arik Rampal. #ArikRampal." Arjun Rampal and Gabriella Demetraides have been sharing glimpses of their newborn and we can’t wait to see his complete picture. On December 31, 2019, Gabriella gave a good start to the last day of the year by sharing her little Arik’s vacation pictures. She took to her Instagram stories and shared glimpses of their holiday. In one of the pictures, Gabriella could be seen holding little Arik, while his face was hidden by an emoticon. In another picture, the doting daddy, Arjun can be seen holding his little boy, Arik in his arms while the two looked at the sea.

Arjun had introduced his ladylove to the world in April by sharing an adorable picture on Instagram with Gabriella. Sharing the picture, the Rock on! actor had written, “Blessed to have you and start all over again... thank you baby for this baby". Gabriella too had posted the same picture and had written, "Grateful for you two can’t wait to meet you." (Suggested Read: Shweta Tiwari, Single Mom, Reveals If She's Open To Falling In Love Again After Two Failed Marriages)

In an interview with Zoom, Arjun Rampal had opened up about his newborn baby, Arik. He had shared that he feels envious of his little son, and had said, "He's the cutest baby I have ever seen. Not taking away from my daughters but he is really really cute, and my daughters are in love with him. Whoever sees him falls in love with him. So, he is actually stealing too much of my spotlight. I'm a bit jealous of him. I would like to share a pic of him when he is one year old. Because he is very small right now and I am too private. Right now he looks more like his mom (Gabriella)." 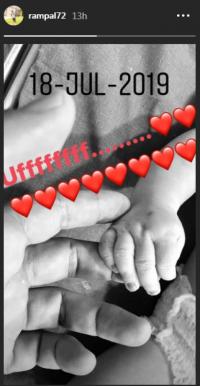 In an interview with the Mid-Day, Gabriella had talked about motherhood. She had shared how she was unsure of having a baby and had said, "I was never one of those people who thought of having a baby. I am actually the youngest of my friends, and we would have conversations such as 'ok, is it time to have a baby yet?'. I would even look at people having babies, and think 'I don't know if I want to do this'. But it all happened very organically, and it may sound like a cliche now, but it's the best thing that's ever happened to me. I used to think I was in love (with Rampal), but then Arik happened (laughs)." 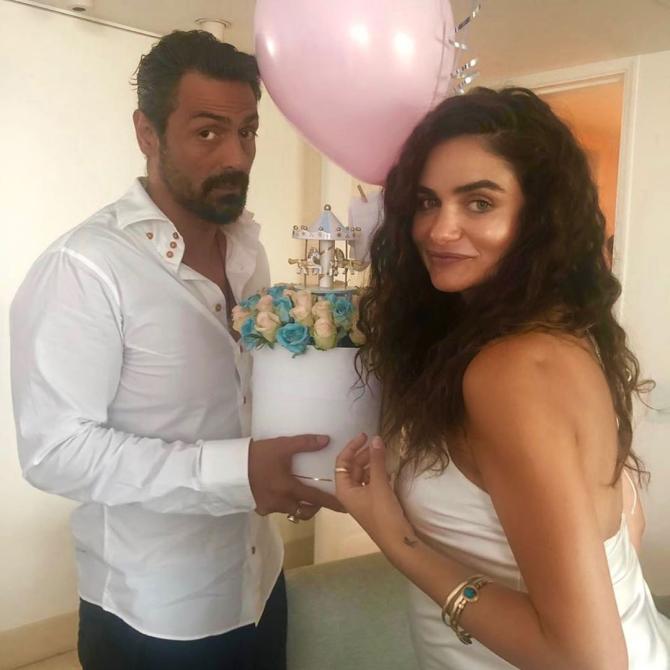 Arjun Rampal, during an interview with the Hindustan Times, had shared that his last five years had almost been like hell. Bollywood’s Daddy was quoted as saying, “It’s been sheer hell for the last five years but what doesn’t kill you makes you stronger, doesn’t it?” Arjun had also shared how he met Gabriella for the first time. He had replied to a media portal on being asked about the same, “Ah, that’s a question to ask. We met through common friends. So, what can I say? That she stalked me? Wishful thinking that, buddy! It’s only been a year since we started dating and here we are. For keeps. And I must add that it was of prime importance that my daughters should accept her as part of the family. I’m blessed that they have, no questions asked.” (Must Read: Rohman Shawl's Comment On Ladylove, Sushmita Sen's Workout Video Is Winning Hearts)

We can’t wait to see more pictures from Arjun, Gabriella and Arik’s vacation!