Arjun Kapoor Has A Perfect Reply For Troller Who Compared Him And Malaika To Dad, Boney And Sridevi

Arjun Kapoor Has A Perfect Reply For Troller Who Compared Him And Malaika To Dad, Boney And Sridevi

Arjun Kapoor regularly grabs the headlines due to his relationship with Malaika Arora and many times, becomes a subject of brutal trolling. However, this time, his friend, Varun Dhawan too spoke up.

This age is a time when the world is ruled by the advent of social media. More than us actually walking up to our friends or neighbour and asking them about their whereabouts, it is through social media that we know what they’re upto. And this is something that we would totally believe to be a major con of technology. But with the pros far outweighing the cons, without social media, we would have never imagined that we would be directly in touch with our favourite celebrities and keep a daily update of what is keeping them busy these days. (Do Read: David Dhawan Says Varun Dhawan Can Come And Announce His Wedding with Natasha Dalal Anytime)

With social media and celebrities, comes harsh trolling which every celeb has their own way of dealing. While certain celebrities master the skills of ignoring someone at their best, there exists stars like Arjun Kapoor who have always stood up for people shaming them on social media. In the similar lines, it must not be unknown to you the once not so favourable camaraderie shared between Arjun Kapoor and his father, Boney Kapoor as he had left his mother, Mona Shourie Kapoor for his second wife, Sridevi. Arjun was known for not sharing a close bond with Sridevi and his two half-siblings, Jahnvi Kapoor and Khushi Kapoor. But Arjun became ideal for everyone overnight with the way he stood for his father and half-siblings when Sridevi had passed away.

Salman Khan Has Banned Boney Kapoor From Entering His House Due To Arjun Kapoor-Malaika Arora? 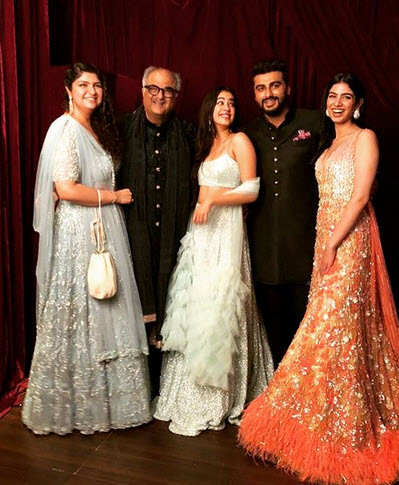 Apart from starring in great films, Arjun Kapoor’s close camaraderie with his ladylove, Malaika Arora is not a secret anymore. He regularly grabs the headlines due to his relationship with Malaika and many times, becomes a subject of brutal trolling. Very recently, a Twitterati who claimed of herself as a fan of Shah Rukh Khan and Varun Dhawan had tweeted a hate message for Arjun and Malaika, which suggested that Arjun displays double standards for he hated his father, Boney Kapoor as he left his mother, Mona for Sridevi and also claimed that he is doing no different by being in a relationship with Malaika, who has a teenage son. Though the tweet now stands deleted (we still have it for you though), it was Arjun Kapoor and his BFF from the industry, Varun Dhawan's reply which grabbed headlines. (Must Read: Nysa Devgan Gets Brutally Trolled For Visiting A Salon, The Next Day Of Her Grandfather's Death)

And then came Arjun Kapoor and Varun Dhawan’s calm reply to the troller who had immediately posted an apology tweet. Arjun’s tweet could be read as, “I don’t hate anyone Kusum. We kept a dignified distance, If I did I wouldn’t have been there for my dad Janhvi & Khushi at a sensitive time... it’s easy to type & judge, think a little. Your @Varun_dvn s fan so I feel I should tell u don’t spread negativity with his face on ur DP.” The troller had immediately responded to his tweet and wrote, “I apologise if I have hurt anyone's sentiments. I meant to do no harm. Extremely sorry to all @arjunk26  Fans.... Please Forgive me. It was just my opinion. Have nothing against @arjunk26 Sir or #MalaikaArora  Ma'am. . SORRY SIR @arjunk26.” Varun Dhawan too, had immediately responded to the tweet and had stated, “Im glad u apologised kusum its okay arjun is not upset lets just all live our own lives ak has a big heart like I always say I don’t want any of my fans to talk bad about any actors #keepiteasy.” Here are the snapshots of the same: 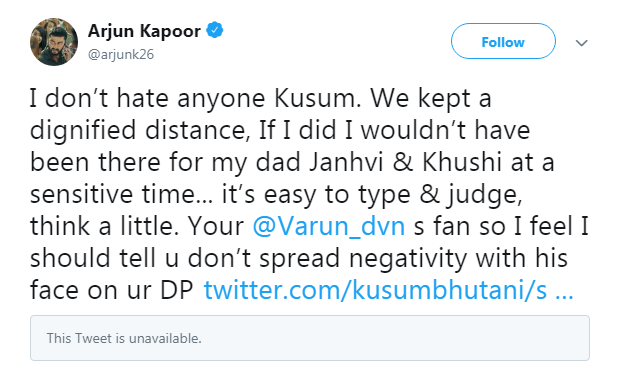 While that’s the way Arjun Kapoor deals with trolls, Malaika Arora has her own unique way of giving it back to haters. Very recently, the Chaiyya Chaiyya star took to Instagram and posting a naughty-wink picture of herself from a beach holiday, gave a savage reply to the trollers. She had written, “Being happy is a choice and I choose to be happy. Also, I think happiness looks good on me, so keep your opinions and your negativity to yourself and spare me your crap. #notinterested #toobusybeinghappy #notimefornegativity #tuesdaythoughts #43nhappy.” Here is the picture: 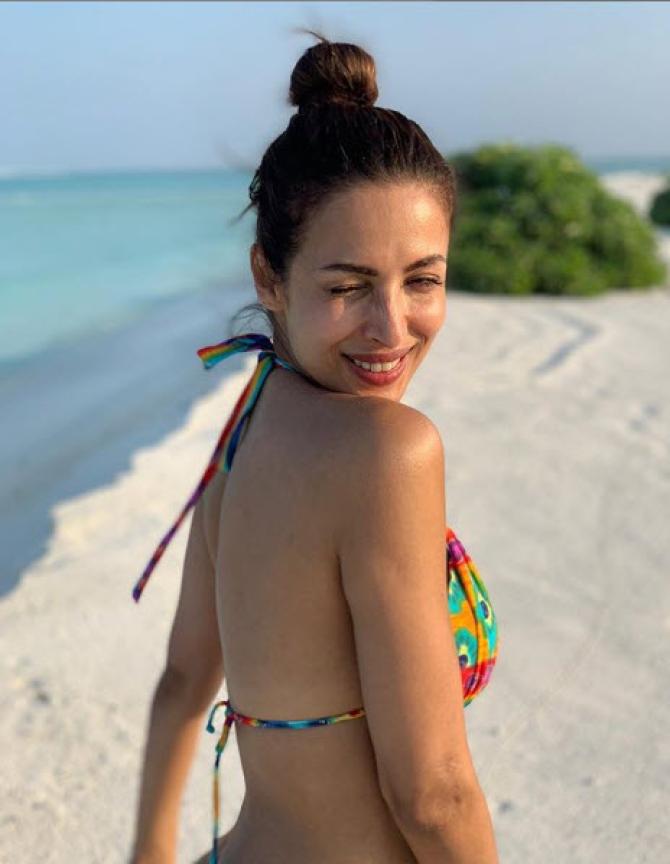 In a recent interview with Filmfare, Arjun Kapoor had revealed the reason as to what made him finally make his relationship public with Malaika Arora. He had shared, “We've come out because we feel the media has given us dignity. There's a certain understanding the media has... they've been respectful, kind, honest and decent about it.  That is why I felt comfortable. You recoil when there's a certain "gandhagi" that comes with the territory. When purposely people irk you by saying, writing or asking things... there hasn't been any of that. Where the paps are concerned, we give them photos when walking in and out of a place. It is normal. We talk to them. There's certain ease. I told them don't sit under the house just because it looks like we're hiding, when we're not. Let it be natural. Let it be normal. I don't want my neighbours being disturbed, I don't want her neighbours being disturbed. We're not doing anything wrong. I don't want that story being conveyed that we're still hiding when we're not. They understood that.” Revealing when they are planning to tie the knot, Arjun Kapoor had shared, “I'm not getting married. I understand why there are speculations. Because in my own house people would ask tu shaadi kab kar raha hai? It's a very organic Indian question. If you're with someone for even three days, the marriage question pops up. Shaadi karlo, tumhari umar ho gayi hai, abhi kitna sochoge? 33 for most people in India is a great age to get married, but not for me. I still have time. If I've not hidden my relationship, why will I hide my marriage yaar?” (Must Read: Alia Bhatt's Bestie Akansha Ranjan Finds Love In KL Rahul, Prays With Him For World Cup 2019 Win) 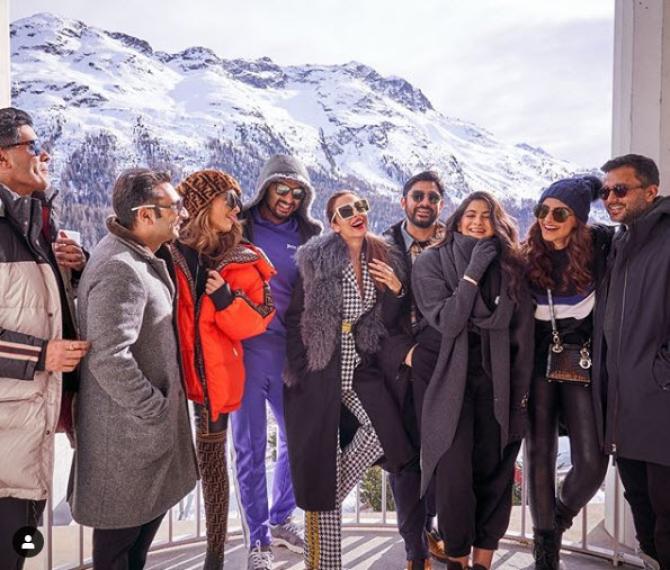 Guys, when do you think Arjun Kapoor and Malaika Arora make way for a wedding? Keep us posted!