The one thing that you will always find in Bollywood apart from entertainment, glitz and glamour are goals! Who knew that 2 half-sibling pairs, who were staying away from each other, would one day, be the best of buddies? Yes, speaking of Arjun-Anshula Kapoor and Janhvi-Khushi Kapoor, this awesome foursome half-sibling lot has given some serious goals to the world by being there for each other in times of need. (Do Read: Shilpa Shetty Kundra And Raj Kundra's Star-Studded Diwali Bash, Pictures And Videos Inside)

And when it comes to wishing each other on birthdays, we sometimes wonder as to how our favourite celebs think about such sensible and beautiful captions for their dear ones! Well, it is the late Sridevi’s youngest daughter, Khushi Kapoor’s 18th birthday and her brother and sisters can’t keep calm! Half-siblings, Arjun Kapoor and Anshula Kapoor took to Instagram to post a heartfelt wish for their dear sister. Check that out in the next paragraphs! Sharing a beautiful picture of Janhvi and Khushi, Arjun wished his 'proper gunda' a very happy birthday. He wrote, "Happy birthday to the Fathers favourite child & a proper Gunda... umm not u @janhvikapoor !!! @khushi05k have a wonderful year but the Paps and the Papa are missing u so come back soon n don’t forget the breakfast at Bubbys before u leave. #paparazzilegend #youngestbrat#silentbutviolentkapoor." Don't miss the picture! Sharing a series of adorable pictures, Anshula Kapoor also wrote a heartfelt wish for Khushi on her birthday, “Omggggggggg it’s ya birthday @khushi05k happy happy birthday kiki!! You have the kindest heart of us all & I’m so proud to see you blossom into the woman that you are becoming! Work hard, shine on, & show the world your beautiful heart because baby girl you are going to shine super bright, I can feel it with all my heart! May this year be even more lit than xxxtra hot Cheetos I Love yaaaa.” Here are the pictures that were accompanied with the post:

Beautiful, right? Badi didi, Janhvi Kapoor’s outside-the-box wish too, grabbed many eyeballs. Sharing a super-adorable throwback video of the duo dancing together, this is what Janhvi wrote as a ‘happy birthday’ post for her baby sister, “Just an example of how most of my childhood consisted of being bullied by you. I still love u though, more than you’ll ever be able to imagine. #hbd.” Here’s the video:

Cousin sissies, Sonam posted a picture of Khushi along with another beautiful caption and Rhea Kapoor posted an Instagram story of Khushi, looking ravishing along with a heartfelt caption written atop it. The same could be read as, “Happy birthday to my beautiful baby sister @khushi05k. I see you marching to the beat of your own drum already and I can’t help but think what a delightful journey this is going to be for all of us to experience. There is always going to be a throne for brave, funny girls, I can’t wait for you to claim yours. You’re 18 beeeeeeech!” Her chachi, Maheep Kapoor too, took to Instagram to post an adorable array of pictures with a sweet caption. The same could be read as, “Happy 18th birthday my darling @khushi05k #TightestHugs & #Love #Health & #HappinessAlways. Shop lots in New York #ItsYourBirthday.” Checkout the pictures here: (Checkout! Anushka Sharma Posts Lovely Birthday Wish For Hubby Virat Kohli, Plans Something Special For Him) 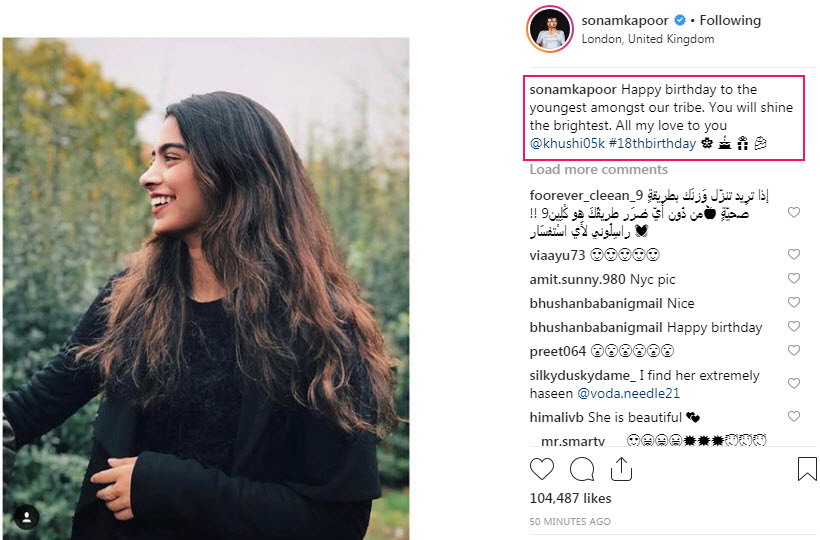 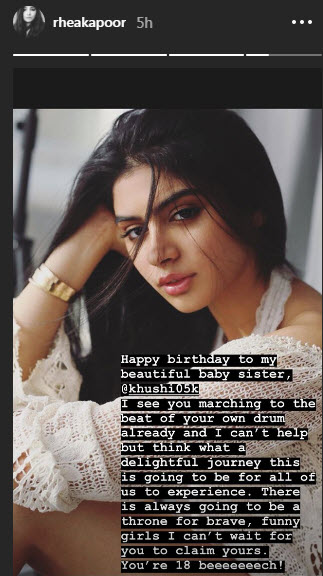 After looking at her pictures, we can totally say that Khushi is a star-in-the-making! During the promotions of Sridevi’s last film, MOM, she was asked about the career choice that her youngest daughter Khushi is willing to make. To which Sridevi had replied, “Yes, Khushi says she wants to get into modelling. Pehle, she wanted to become a doctor. Phir doctor se lawyer and now it’s modelling. So, I am waiting for the shock to happen.” Only last year (2017), Boney Kapoor spoke about the career change that Khushi is opting for and shared, “And Khushi first wanted to become a model – but has now shifted her focus to becoming an actress." However a latest August 2018 Deccan Chronicle report suggested that Khushi will soon be launched in films and we might get to see her sharing screen space with none other than, ‘hotness’ personified, Shah Rukh Khan’s son, Aryan Khan! A close family friend of the Kapoors revealed to the publication, “Khushi will be launched sooner rather than later, and that too by Karan Johar. Karan’s taken over that responsibility from Boney. Though Khushi’s debut is being kept a well-guarded secret, they’ve already started looking for a suitable script.” About working with Aryan, the source further stated, “That’s Karan’s game plan. Let’s see how it goes.” 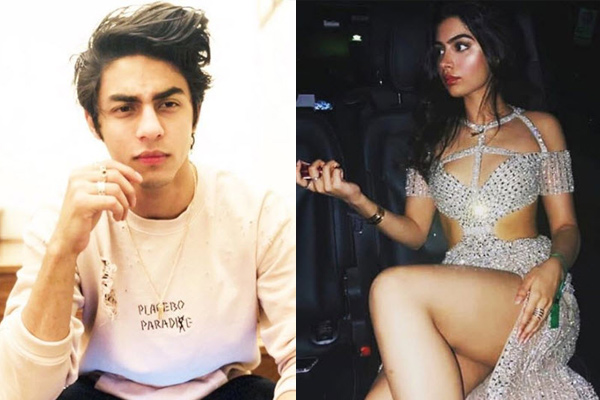 Also, Anshula had once revealed Boney Kapoor’s favourite child out of all the four. A super-cool Instagram feature called 'ask me anything’, allows a user to answer a question that their followers ask and put it as their Instagram story. Anshula did the same on September 09, 2018 and answered an array of questions asked by her followers. One such question which caught everybody’s attention was when a follower asked Anshula “Out of you 4 siblings, who is Boney ji’s most favourite?” To which she replied, “Khushi 100”! Revealing “the secret out” and tagging all her siblings, she ended her answer with a “No but honestly, he loves us all the same." That’s super-cute! (Don't Miss! Ranveer Singh Looked Like A Happy Groom On His Haldi Ceremony, Clicked Selfies With Shanoo Sharma) 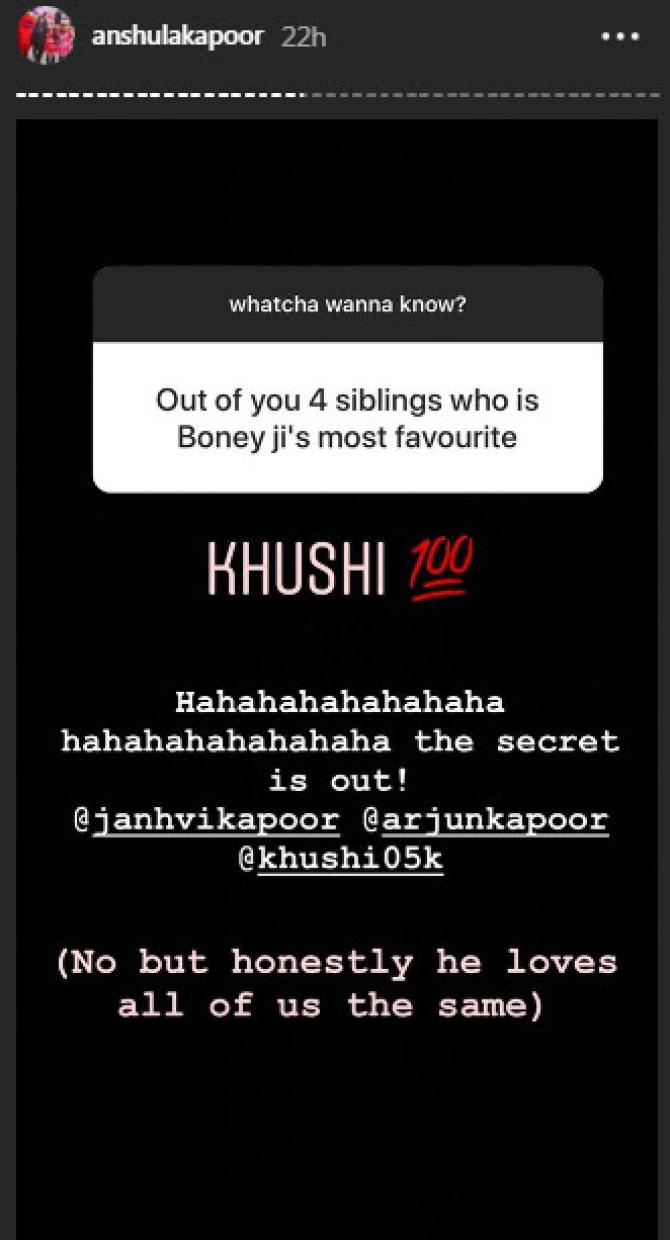 Khushi, we long to see you in the big screens soon! Here’s wishing you a very happy birthday!