Anushka Sharma is making sure that her husband, Virat Kohli does not miss his cricketing days and go out of form. The couple plays cricket at their home. Check out the video inside!

The COVID-19 pandemic has shut down countries and everyone is supposed to lock themselves inside their house to stop the chain spreadability of the virus. The lockdown which had started with 21 days has now been over 50 days and people are desperately waiting for the lockdown to lift so that they can continue their life the way it was. However, stepping out with the masks, gloves and maintaining a safe distance is the new normal, people are waiting to get back to the normal life they had been habitual of. The lockdown has affected every business in the world and along with them, the cricket tournaments are also put on halt. However, it is the Indian cricket team captain, Virat Kohli, whose wife, Anushka Sharma is making sure that her husband does not miss his cricketing days and go out of form. (Also Read: Shoaib Ibrahim Slams A Troll Questioning His Wife, Dipika Kakar's 'Salwaar Kameez' Look)

Anushka Sharma and Virat Kohli are spending their quarantine together. It has come as a blessing in disguise for the couple as often they both are in different countries owing to their professional commitments. Anushka and Virat have been sharing the glimpse of their lockdown with their fans every now and then, but along with that, Anushka makes sure to remind her husband, Virat about what he is made of. Earlier, it was Anushka mimicking Virat’s fans, asking him ‘Chauka Maar’ then cut to her reminiscing the days she used to watch Virat’s matches from her shoot location vanities. However, this does not end here, as the actress has decided to help her husband with some cricket practice sessions. The famous paparazzi, Manav Manglani took to his Instagram handle to share a video of Anushka Sharma and Virat Kohli, which seems to be taken from a building diagonal to Virushka’s house. In the video, we can see Anushka holding the bat, while Virat Kohli has turned baller for his ladylove. The two can be seen having a cricket practice session as Virat balls down to Anushka and she hits the ball away. Along with the video, Manav wrote a caption that can be read as “Some cricket practice with his love #anushkasharma #ViratKohli play at their house in Mumbai #LockdownLife #mumbai #Saturday #weekendvibes.” Take a look at the couple’s cricket practice session below.

As we said, Anushka keeps reminding her husband, Virat about his Cricketing days. On May 14, 2020, Anushka had taken to her Instagram stories and had shared a story uploaded by her 2 years ago. In the story, we could see her taking a selfie from her vanity van in front of a mirror. In the selfie, one could see a smartphone glued on the same dressing mirror and in which we could see Anushka’s hubby, Virat Kohli playing for his IPL team, Royal Challengers Bangalore. Remembering the good old days of going to work, Anushka had written a caption “When going to work and watching live matches was no big deal” atop of the throwback story. (Recommended Read: Anand Ahuja Kisses Wife, Sonam Kapoor, She Reveals Why She Calls Him Gautam Buddha) 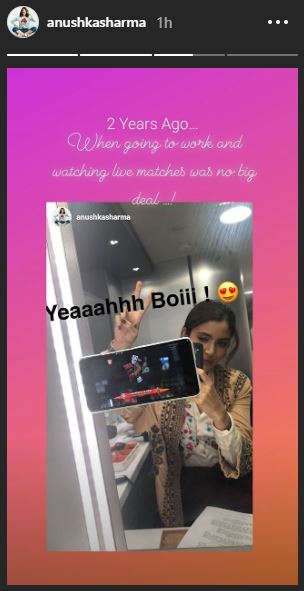 On April 17, 2020, Anushka Sharma had posted a video of herself on her Instagram handle, lip-syncing a fan’s voice as she cheers him to hit a four. The actress is looking beautiful in her simple attire as she can be seen wearing a white-printed top. While her hubby, Virat can be seen wearing a charcoal-coloured T-shirt and specs. The funny video had gotten viral in no time over the internet. Along with the video, Anushka had written, “I thought he must be missing being on the field. Along with the love he gets from millions of fans, he must be especially missing this one particular type of fan too. So I gave him the experience.” Take a look. (Don't Miss: Vicky Kaushal's Brother, Sunny Kaushal Wishes Him Birthday In Old School Style, Says Kuch Nahi Badla)

We love how Anushka and Virat are always appreciative and supportive of each other’s career! What are your views about the couple?