Dipika Kakar is lucky to have Shoaib Ibrahim as her husband as he comes forward to defend his wife and her clothing choice. Read on to know his befitting reply!Â

We live in a country, where a girl has to often answer about her clothing choices. Her clothes are blamed for everything and she is prohibited from wearing a certain type of clothes. It feels as if people judge a girl’s character on the basis of her outfit. There is no freedom for a girl to wear what-so-ever she wishes to wear. The society is going to question her even if she is in a burkha. We all know this needs to stop, but who is going to take an initiative? Every single time the question on her dressing sense adds up to her frustration. While some of them lash out, there are still some, who have to swallow a bitter pill and kill their desire for a certain outfit. Not every girl is as lucky as television actress, Dipika Kakar, as her husband, Shoaib Ibrahim comes forward to defend his wife and her clothing choice. (Also Read: Anand Ahuja Kisses Wife, Sonam Kapoor, She Reveals Why She Calls Him Gautam Buddha)

Dipika Kakar had made it to her fan’s heart through her popular show, Sasural Simar Ka. However, it was not just her fans, but also co-star, Shoaib Ibrahim, who had gotten swooned by Dipika and her grounded nature. The couple had tied the knot on February 22, 2018, in a nikaah ceremony accepting each other for life. The couple made us fall for them, even more, when Dipika had participated in the reality show, Bigg Boss. Their honest longingness and the hugs on meeting after months and poem was proof of how honest and loyal their love is for each other. However, on one hand, there are people, who appreciate everything done by the couple, on the other hand, there is a set of people, who are ready to troll and criticise the duo for their choices.

Shoaib Ibrahim Helps Wife, Dipika Kakar In Cleaning The Dishes Amidst The Lockdown 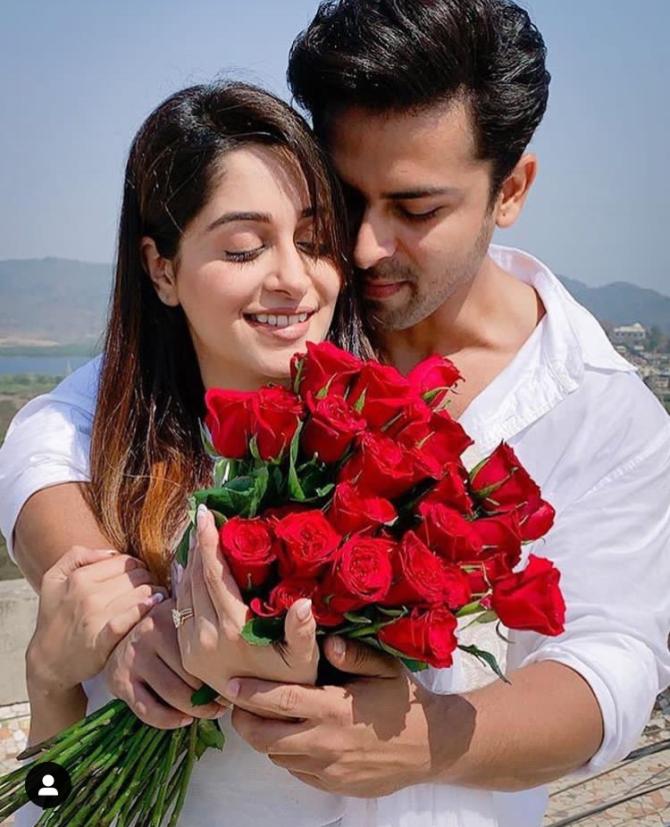 Shoaib Ibrahim has turned into a pro when it comes to slamming the trolls. Sometimes, it gets important to retaliate as the trolls stoop down to another level. Keeping this in mind, on May 15, 2020, Shoaib shuts a troll when he or she tried to question his wife, Dipika’s outfit picks. Shoaib took to his Instagram handle to host an ‘ask me anything’ session. In between all the love showered on him, came an inappropriate question that kinda made Shoaib furious and we are glad that he shut the troll with generosity. A fan asked Shoaib, "Deepika Ji hamesha Salwar suit mein kyun hoti hai kya... aapki family force karti hai?" This question did not go well with Shoaib and he retaliated saying, "iska jawab main aapko dena zaroori nahi samjhta. Sach main janta hu meri wife janti ....baki jiski jaisi soch waise hi sawal upar wala aapko khush rakhe". Other than this, a fan asked him “What is love for you, and how you handle trolls?” To which, he replied, “Trollers ka kya hai khali baithe rehte hai dusro ki khushiyon se jalte hai. The best way is to IGNORE. And love hai toh zindagi khoobsurat hai.” Take a look at the screenshot of the stories. 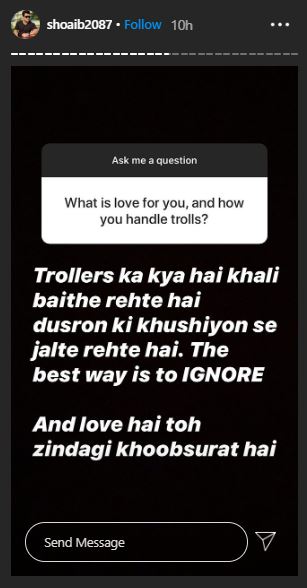 This is not the first time that Shoaib has given a befitting reply to the troll. Shoaib has always come up to defend and protect his family. On May 5, 2020, Shoaib Ibrahim had taken to his Instagram handle and had hosted a little Q&A session with his followers. While some asked about his professional life, some asked about his time in quarantine. However, one fan had asked Shoaib when he and his wife, Dipika Kakar are planning to have a baby. The fan’s question could be read as “Aap baby KB pan karoge...Sorry ye aapki prsnl lyf he BT mera maan hua puchne ka isliye puch liya.” To which, the television actor had replied “Jab pata hai personal hai toh puchna hi kyu.” (Recommended Read: Vicky Kaushal's Brother, Sunny Kaushal Wishes Him Birthday In Old School Style, Says Kuch Nahi Badla) In a conversation with the Indian Express, Shoaib and Dipika had talked at length about their relationship and what they love, hate and tolerate about each other. To which, Dipika had replied, “I love about him is the way he carries his relationships be it with his family, with his friends, you know. He just takes them together and walks ahead. So, that is what I love about him. What I hate about him is not something that I would like to discuss about openly. And what I tolerate about him is his phone. Kabhi mujhe mauka mile na to main ise dustbin mein daal ke aa jaungi. I tolerate this about him.” (Don't Miss: Viaan Kundra Playing With 3-Month-Old Sister Samisha Is A 'Sight To Behold' Moment For Shilpa Shetty)

Shoaib Ibrahim Helps Wife, Dipika Kakar In Cleaning The Dishes Amidst The Lockdown