Anurag Kashyap was put on the spot by asking him what he will do if his daughter wants to make her debut in Bollywood? Scroll down to know what did he say! 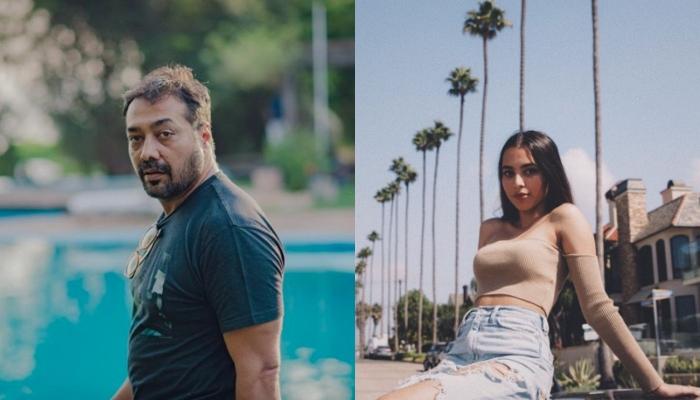 'Films are the mirror of a society', and any filmmaker, who has understood this, is Anurag Kashyap! After writing a televisions series, Kabhie Kabhie in 1997, Anurag Kashyap had gained the fame with Ram Gopal Varma's Satya, in which he was the co-writer. Over his more than a two-decade-long career, Anurag has given some realistic pieces of cinema. Anurag Kashyap is the kind of filmmaker, whom we desperately needed to break the superficial monotony of Indian cinema. Not only a great filmmaker, but Anurag Kashyap is also famous for having an unfiltered approach towards issues which need to be addressed. Addressing the elephant in the room, Anurag has been extremely vocal about his opinions on nepotism in Bollywood recently and has even been involved in a war of words with Kangana Ranaut. (Recommended Read: Sushant Singh Rajput's Brother-In-Law, OP Singh Pens A Memoir For His 'Warrior Prince')

Anurag Kashyap was put on the spot by asking him what he will do if his daughter wants to make her debut in Bollywood? Being famous for ardent unfiltered voicing of his opinions, especially on sensitive issues like, nepotism, it was interesting to know his stand on nepotism in his 'home'. And he didn't disappoint us! His answers were as coy as the characters of his movie, if not less. Scroll down to know what Anurag Kashyap has to say about his daughter, Aaliyah's debut in Bollywood!

In an interview with NDTV, ace filmmaker, Anurag Kashyap was asked about his take if his daughter, Aaliyah, decides to join the film industry one day. He said, "She's an adult, she has to choose, but definitely she has to learn. She can't wake up one day and say 'I want to be an actor'." Anurag made his stand pretty clear that if his daughter wants to be an actor, she'll have to do it all on her own. He further said, "If she wants to do it, she has to struggle for it and go and audition for it and win a role somewhere." The filmmaker also stressed on the fact that since his area of interest is specific, it's hard to imagine that he would be able to write a role for someone like her. He continued, "I don't think I write movies which are so urban where she will fit in. She's an urban kid; she's not a street kid like me."

In the same interview, Anurag Kashyap also talked about his camaraderie with his siblings, filmmakers, Anubhav Kashyap and Anubhuti Kashyap. FYI, Anubhav had accused Salman Khan and his family of threatening hin and sabotaging his career, followed by a fallout between the two after the former directed Dabangg for him. Speaking on this whole facade, Anurag Kashyap said, "My brother does not need me. Right from the beginning of our lives and our careers, it has been very clear that we will carve our own paths. My brother thinks very differently. We have different political ideologies; we look at cinema differently." (Also Read: Amitabh Bachchan Pens An Emotional Note As Aishwarya And Aaradhya Get Discharge From Hospital)

On being asked why didn't he support his brother or spoke for him, Anurag retorted, "When I was shooting for Gangs of Wasseypur, the news came out that Arbaaz Khan will direct Dabangg 2. I immediately reacted on Twitter. I was very upset. My brother called me and asked me to delete all the tweets. I deleted all the tweets because my brother said 'I have chosen not to do Dabangg 2 and you can't do this, and never interfere with my business'." FYI, Anurag had put out a statement during the controversy back in June. He'd written on Twitter, "For the media calling people who want to ask, treat this as my statement. 'More than two years ago, Abhinav had told me clearly to stay out of his business, and it's not my place to comment on anything he says or does.' Thank You." (Don't Miss: Raveena Tandon's 'Tip Tip Barsa Paani' Mode With Daughter, Rasha Thadani Sets Major Nostalgia)

What do you think about Anurag Kashyap's statements? Let us know!