Tina Ambani's son, Anmol Ambani's wedding was nothing short of a royal affair. Check out some unseen glimpses from his 'haldi' ceremony!

The founder of Reliance Industries, Dhirubhai Ambani had made a mark of his own in the business world, courtesy of his hardwork and dedication. The business tycoon had got married to Kokilaben Ambani, and the couple is blessed with four kids, Mukesh Ambani, Anil Ambani, Nina Kothari and Dipti Salgaocar. After Dhirubhai's demise, his sons took over his business, and they have been preserving their father's legacy ever since.

The Ambanis are one of the richest families in Asia, and they celebrate each occasion like a festival. Recently, Anil Ambani and Tina Ambani's elder son, Jai Anmol Ambani had got married to his ladylove, Khrisha Shah, on February 20, 2022, and their wedding was a regal affair. Pictures and videos from the same were doing rounds on the internet, and we were stunned by the same. Now, we have got hold of some surreal pictures from their haldi ceremony. Recently, we stumbled upon some surreal pictures from Anmol Ambani's haldi ceremony. In the pictures, the then-groom-to-be was drenched in haldi and his family members can be seen throwing rose petals at him. The pictures speak volumes about the bond between the Ambanis, and it reflects how much they value their family traditions. From laughing their hearts out to posing for fun-filled pictures, the family members not only marked their presence, but also enjoyed the ceremony.

However, the most adorable picture was the one, wherein Kokilaben Ambani can be seen applying tilak on her grandson's forehead. For the event, the doting grandmother donned a printed pink-coloured saree, which she styled with a customised matching mask. On the other hand, Anmol Ambani was dressed in a white kurta-pyjama as he seeks blessings from his dadi maa. The priceless picture won our hearts, and it was too beautiful for words!

On the other hand, we also got hold of some beautiful pictures from Tina Ambani's bahu, Khrisha Shah's chooda and haldi ceremony at her home. The then-bride-to-be was dressed in a pink-coloured bandhani outfit for her chooda ceremony and looked gorgeous. In one of the pictures, she can be seen performing a ritual with her family members in a green-hued suit. The pictures gave us a sneak peek into some adorable moments featuring Khrisha and her family members, and it was unmissable. Check it out below:

We can't wait to see more glimpses from Khrisha and Anmol's haldi ceremony. What about you? Let us know! 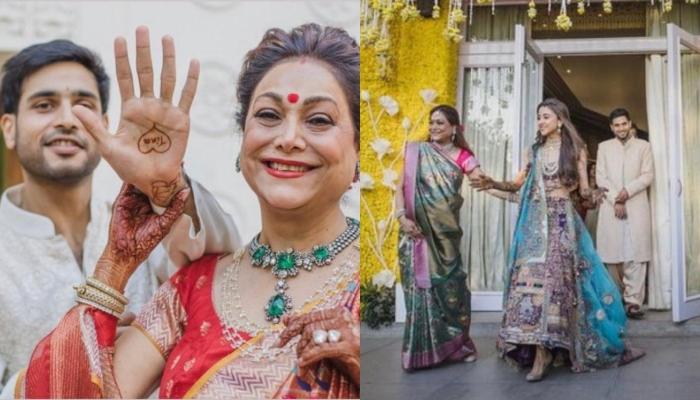