Television actress, Ankita Lokhande celebrated the launch of her much-awaited show, 'Pavitra Rishta', on ZEE5 and shared a video of her cutting some cakes with her boyfriend, Vicky Jain.

After months of anticipation, the much-awaited second season of the popular television show, Pavitra Rishta, is streaming on ZEE5. While on one side, Ankita Lokhande is reprising the role of 'Archana'. On the other side, Shaheer Sheikh is already getting rave reviews from the audiences for playing the character of 'Manav', a character that had made its way into the hearts of millions, all because of the late actor, Sushant Singh Rajput's impressive work.

The early reviews of Pavitra Rishta 2 are quite encouraging for the makers of the show, as people are falling in love with Shaheer Sheikh and Ankita Lokhande's chemistry in the show. However, a section of the audience is disappointed with the show's makers to hurt the fans' sentiments by replacing the late actor, Sushant Singh Rajput's character, 'Manav', with Shaheer Sheikh. Amidst all the mixed reactions from the audiences, Ankita dropped a video in which she can be heard saying that her boyfriend, Vicky Jain is her 'real-life Manav'. On September 16, 2021, Ankita Lokhande took to her Instagram handle and dropped a cutesy video in which she can be seen cutting some mouth-watering cakes, along with her boyfriend, Vicky Jain and their friends. The reason behind these celebrations was the launch of Ankita's show, Pavitra Rishta 2, and the fact that it is receiving impressive early reviews from critics and audiences. However, the highlight of this video was the way Ankita called Vicky her real-life 'Manav'. Along with this priceless video, Ankita penned a note in the caption, and it can be read as "15/09/2021 Pavitra Rishta. A day full of love and blessings. Thank you each and everyone for the love, support and appreciation. Grateful."

There's no doubt that Ankita Lokhande and her boyfriend, Vicky Jain, are one of the most popular couples in the entertainment industry, as almost all their pictures and videos make it to the trending charts in no time. For instance, on August 24, 2021, Ankita Lokhande had taken to her IG handle and had shared a Reel in which she and her beau, Vicky could be seen answering some mushy couple related questions.

Don't Miss: Sapna Choudhary Reacts To The Speculations Of Her Death, Reveals How Her Family Is Getting Affected However, out of all the questions, the one that had stood out from the rest was 'who said I love you first?'. Answering this question, Ankita had quickly pointed her thumb towards Vicky, but the latter had denied it by pointing his finger towards her. Their cute banter had ended with the revelation that Vicky takes more time to get out of bed in the morning. Along with this cute video that had gone viral on social media in no time, Ankita had written, "Find out who proposed first" in the caption.

For the unversed, Ankita Lokhande had completed three years of togetherness with Vicky Jain on April 21, 2021. 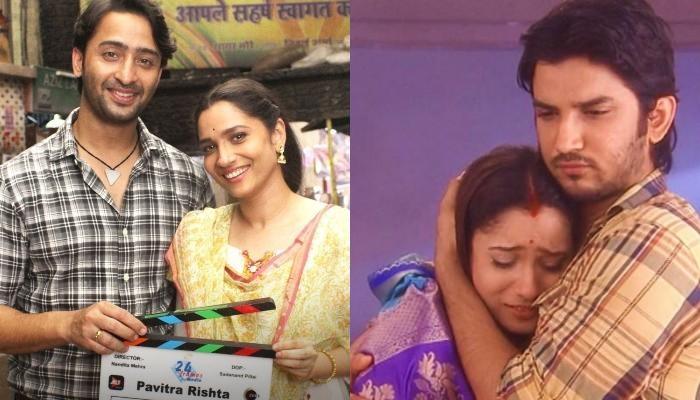 Aasmaan mein jab tak sitaare rahenge...., the title track of the popular television show, Pavitra Rishta, had won the hearts of millions of people in the first season that had starred Ankita Lokhande and late Sushant Singh Rajput. Their characters, 'Archana' and 'Manav' had become a household name and they had