Anita Hassanandani is enjoying every moment of her pregnancy phase. On October 27, 2020, Anita shared a picture of herself when she no one had a clue about her pregnancy.

Anita Hassanandani and Rohit Reddy are tagged as the cutest couple of the glamour world. Ever since the actress had announced the news of her pregnancy, the couple has been sharing glimpses of their pregnancy moments. From how they had managed to camouflaged the pregnancy to how everyone had reacted to the much-awaited news, the doting couple has been sharing every detail of the most amazing phase of their lives. (Also Read: Priyanka Chopra Reveals What Exactly Mom, Madhu Chopra Said After She Won The Title Of Miss World)

The doting couple and soon-to-be-parents, Anita Hassanandani and Rohit Reddy had completed seven years of marital bliss on October 14, 2020. To celebrate their anniversary and babymoon, the two had jetted off for a mini-vacation. Anita had shared pictures from her ‘Babymooniiversary’ photoshoot with her doting hubby, Rohit Reddy. While Anita had looked super-cute in a polka-dotted black dress with neckpieces and a bracelet accentuating her look, Rohit had opted for a casual look. The soon-to-be parents had posed amid black, white and golden balloons. Sharing the beautiful pictures from their photoshoot, Anita had written, “Babymooniiversary. In pics you’ll also find the biggest baby.” 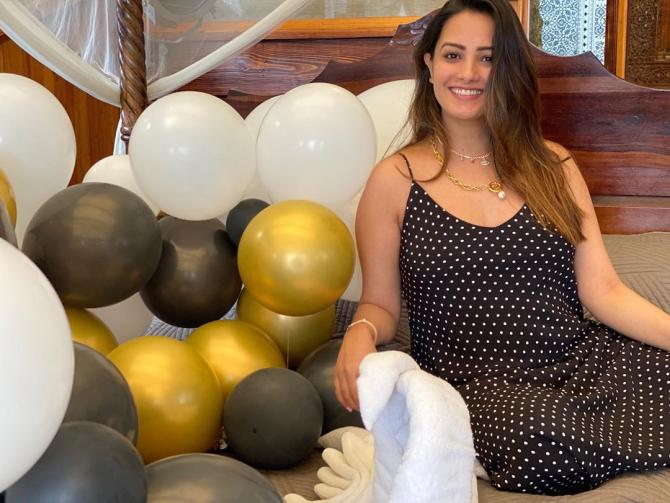 On October 27, 2020, Anita took to her IG handle and shared a stunning picture from the sets of Naagin. The picture was taken during the initial phase of her pregnancy when no one was aware about her ‘good news’. Along with the picture, wherein, she looked gorgeous in her ‘Naagin’ attire and was seen stroking her baby bump, Anita wrote, “Initial days when no one had a clue…Dammnnn time is flying by...#MixedEmotions also #MoodSwings.” 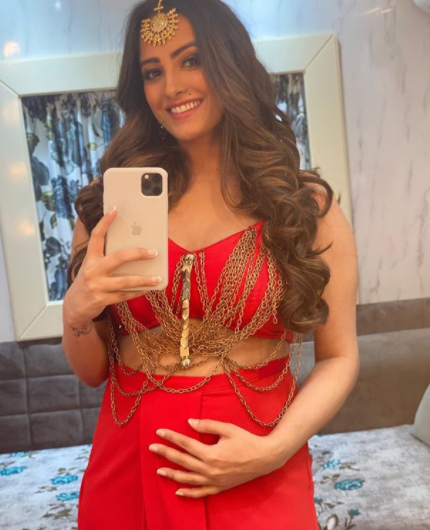 On the other hand, Rohit took to his IG handle and shared an adorable selfie with his pregnant wife, Anita. In the picture, Anita looked beautiful as her pregnancy glow was unmissable and Rohit flaunted his grey hair. Along with the picture, Rohit wrote, “All set to be World’s Greyest Father... I mean Greatest!” 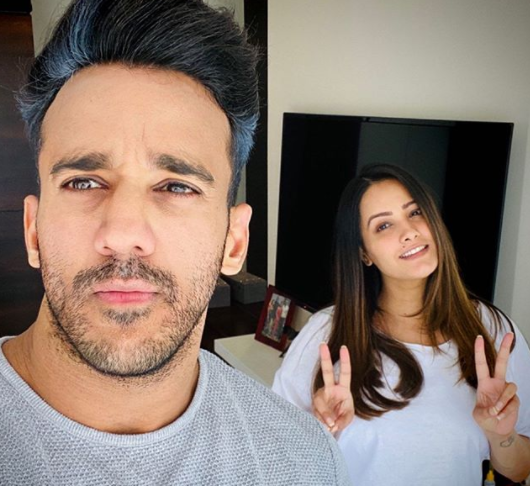 The rumours about Anita’s pregnancy had begun on Ganesh Chaturthi when Rohit had posted a goofy video on his IG handle, where he had performed a magic trick with Anita. In the video, Anita had looked gorgeous as usual in a pink anarkali and jhumkas. Rohit had captioned it, “Houdini, move over bro!” While their industry friends were impressed with the magic trick, netizens had pointed out Anita’s baby bump in the comments section. Wondering if Anita’s pregnant, a user had commented, "Not sure if it's the baggy clothes but for a second I thought Anita was expecting." Another had replied, "Looks like @anitahassanandani is pregnant."

Adding more fuel to the fire, on September 15, 2020, Anita had taken to her IG handle and had shared a childhood picture of herself with her maasi. There is no doubt that Anita had looked adorable in the throwback picture but it was her caption that had made us think whether she is really pregnant. Her caption atop the picture could be read as “It’s me with my beautiful maasi. Our baby better look like me @rohitreddygoa” followed by an array of laughing emoticons. (Also Read: Kajal Aggarwal Weds Gautam Kitchlu: Sis Nisha Shares Details About 'Haldi', 'Mehendi' And 'Shaadi')

On August 30, 2020, Anita had shared a mushy picture with Rohit from one of their vacations. In the picture, we could see Anita and Rohit posing for the camera, and the actress had captioned it as "Looking at 2021! Super Excited." The caption had become a hint for the fans that good news is on its way, and they had started sending congratulatory wishes. Rohit had finally opened up on the same and had commented on the reason for their happiness, "Areee, 2021 mein Vaccine aa jayage na! That is why!" On this, Anita had written, "Good one." 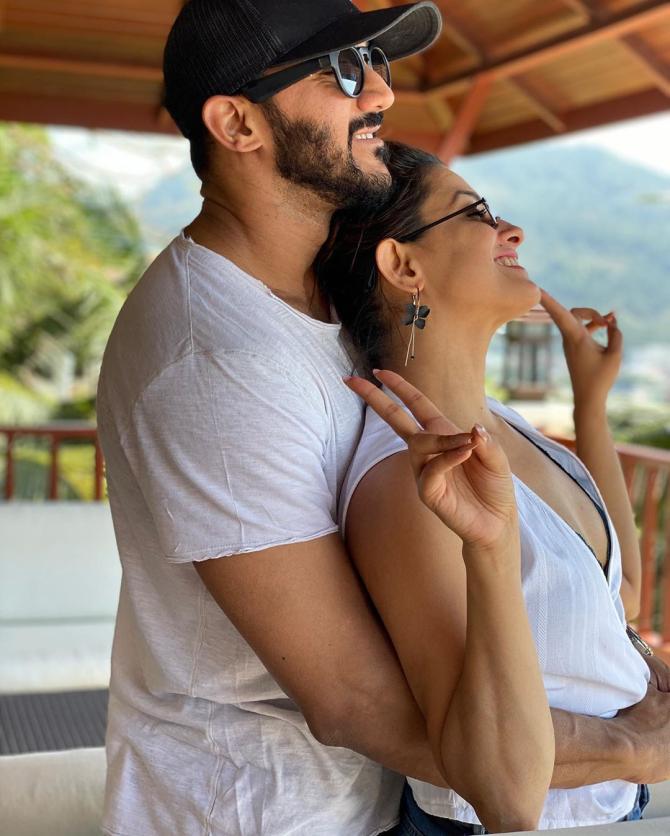 Anita Hassanandani had kept the news of her pregnancy a secret from the past few months but she hadn’t kept herself away from posting pictures on social media. She had smartly posted the pictures, hiding her baby bump, though it had sparked off her pregnancy speculations in the media. Sharing four times she had fooled her fans and media by managing to conceal her baby bump, Anita had written, “Four times I managed to conceal my baby bump. Kinddaaa fooled you all!!!” (Also Read: Smriti Khanna's Little Baby Girl, Anayka Responds To Her Name, Mommy Is Elated [Video Inside]) 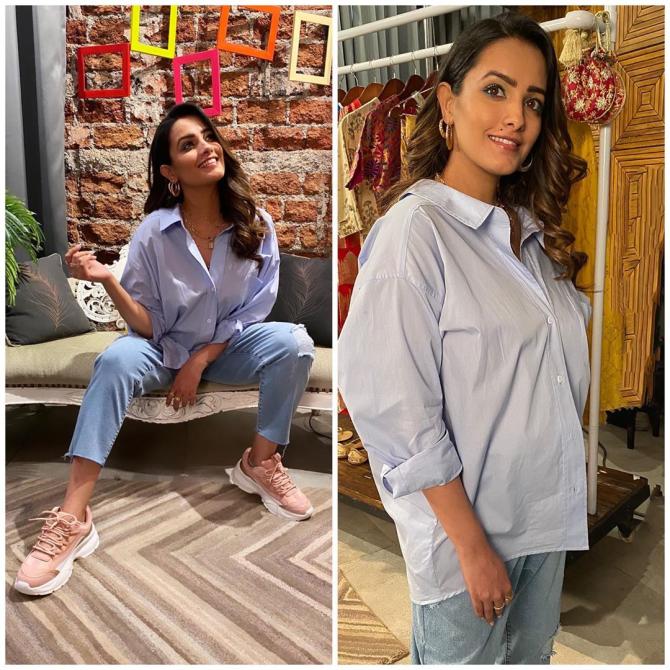 Here's wishing a happy and healthy pregnancy to Anita! Yeh Hai Mohabbatein actress Anita Hassananadni and her husband, Rohit Reddy, are among the most talked-about couples in the telly world. The lovebirds had crossed paths for the first time outside a pub, and Rohit had tried to woo her without knowing that she was a famous actress. From being Facebook