Sania Mirza's darling sister, Anam Mirza is enjoying her honeymoon with her hubby, Mohammed Asaduddin. The newlywed couple floats in a half-frozen lake. 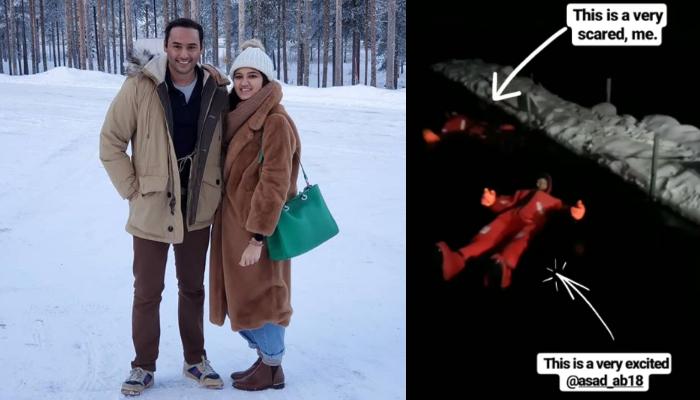 Isn’t it strange that we make the same promises with different people in our respective lives? From our first heartbreak to our seventh phera, we all fall in love without thinking twice and also break relationships without giving a second thought. Well, the time has changed and with this modern culture turning upon our heads, falling into love is more like walking into a grocery store. Didn’t get it? Well, social media is the name of that grocery store which we are talking about here. On social media, you can know everything about a person just by tapping into their social media profiles in minutes. However, if that person doesn’t accept your request, you always have the option to scroll down to other profile and continuing your hunt for love until someone accepts your request. (Recommended Read: Kapil Sharma Shares The First Family Picture With Ginni And Their Daughter, Reveals Her Name)

There’s nothing wicked in having options and it’s not like, people don’t fall in love with each other these days. The only hindrance is the fact that they fall in love with a lot of people. The reason behind this is the rise of social media in recent years, now people have access to soo many profiles that they don’t consider waiting for a single one. However, there are still some couples out there who still believe in the old school of love. And, despite having too many distractions on social media, they’re loyal to each other. One such couple is our newly-married, Anam Mirza and Mohammad Asaduddin. The couple is currently enjoying their honeymoon in Finland. The lovely couple had said ‘qubool hai’ to each other on December 11, 2019.

A lot of jaws were dropped a few days ago when Anam and her husband, Asaduddin shared some pictures from their romantic honeymoon on their respective Instagram handles. There’s no denying to the fact that their pictures were exceptionally gorgeous and romantic too. However, this time around the couple has given some serious couple goals, as they settled to float in a half-freezing lake. Yes, you heard it right! The couple turned their romantic honeymoon into an adventurous trip. Asaduddin is the one, who posted the video of him and Anam floating in the lake in his Instagram stories and had written “Floating in a frozen lake, it’s probably something I never thought I’d do. But now, it’s one of the best experiences I’ve had.” Anam also shared the video and expressed her emotions, as she had written “Not sure how I managed to do this. Swam in 1-degree water. Cannot believe I did this.” (Don't Miss: Neena Gupta Talks About Her Regret Of Having Her Daughter, Masaba Gupta Out Of Wedlock)

Well, no wonder every person out there wants to experience this breathtaking adventure with their beloved partners for once. Both Anam and Asaduddin are having one of the most enjoyable moments of their lives. The reason behind their awesome companionship is the fact that they’ve been dating each other secretly before their nikah. Not only the couple but even their respective families were extremely happy with their children’s choices. However, Anam’s elder sister, Sania Mirza is the one who disclosed the news in an interview with The Times Of India last year and had stated “She (Anam) is getting married in December. We just came back from her bachelorette trip to Paris. We are excited. She is marrying a lovely boy. His name is Asad and he happens to be the son of Mohammad Azharuddin and we are excited about it.”

Sania was remarkably pleased of her baby sister’s decision from the start and was assisting her in every single step during her marriage. On the other side, Asaduddin has also showered words of affection and respect for her sister-in-law, Sania Mirza on her 33rd birthday that was on November 15, 2019. Asad had captioned the post with a heartfelt message and had written “Found a sister in a sister-in-law. Happy Birthday, Api. You’re a perfect example of an amazing sportsperson and an even better human being.” Sania and her mother share the same birth date and Anam had wished them both by posting a family picture. She had captioned it, “Happy birthday to both my lifelines. Baba and I are constantly looking out for you both (clearly) #MyMamma #MyApi.” Both Anam and Asaduddin are enjoying their honeymoon in Finland and we hope they keep on delivering more couple goals like this one. (Must See: Saif Ali Khan Gave An EPIC Response When Asked About Going Pub With Taimur Ali Khan And Ibrahim)

Here's wishing Anam and Asad, a life of happily ever after!