Birthdays bring in a lot of joy and happiness as we wait for an entire year to celebrate the special day with our loved ones. From surprise parties to warm wishes, everyone around us makes our day super-special. And like all of us, B-town celebs too love celebrating their birthdays with their loved ones. And, when it comes to celebrity kids, the excitement doubles. The Bachchan pariwaar is going through similar emotions as their beautiful angel, Aaradhya Bachchan has turned nine, and it is her dadaji, Amitabh Bachchan, who has the sweetest wish for her. (Also Read: Shilpa Shetty Kundra Shares Cute Video As She Celebrates Her Daughter, Samisha's First Diwali)

The shahenshah of Bollywood, Amitabh Bachchan dotes on his grandchildren, Navya Naveli Nanda, Agastya Nanda and Aaradhya Bachchan and shares a warm bond with them. In an interview with IANS, the daadu dearest had revealed that he loves spoiling his grandchildren and often takes advantage of his authoritative position in the family. He had also revealed that because of his authoritative position in the family, their parents would not oppose him. Amit ji is undoubtedly an epitome of a doting grandfather.

It was in July 2020, when Amitabh Bachchan and Abhishek Bachchan had tested positive for COVID-19. And with Amit ji and Abhishek, Aishwarya Rai Bachchan and Aaradhya Bachchan too had tested positive. While Aaradhya and Aishwarya had recovered quickly, Amit ji and Abhishek had taken some time. In an episode of the popular game show, Kaun Banega Crorepati season 12, Amit ji had revealed how he and his granddaughter, Aaradhya were watching KBC and the little one had enlightened him with her thoughts on the virus. While speaking on NDTV telethon, Amit ji had revealed, “Last night, my granddaughter Aaradhya was seeing KBC and said, you know, this corona might mean ‘the crown’, but actually it is ‘karo na’. Which means, ‘don’t do’. I thought that was brilliant.” (Also Read: Ankita Lokhande Pens A Birthday Wish For Former Beau, Sushant Singh Rajput's Sister, Shweta)

Amit ji had once written a letter for his granddaughters, Navya Naveli Nanda and Aaradhya Bachchan, which could be read as “My very dearest Navya and Aaradhya, You both carry a very valuable legacy on your tender shoulders – Aaradhya, the legacy of your pardadaji, Dr Harivansh Rai Bachchan…and Navya, the legacy of your pardadaji, Shri H P Nanda…. Both your pardadajis gave your present surnames celebrated fame, dignity and recognition! Both of you may be a Nanda or a Bachchan, but you are also girls…women! And because you are women people will force their thinking, their boundaries on you. They will tell you how to dress, how to behave, who you can meet and where you can go."

He had concluded his letter by saying, "But I believe that it is women like you that will change that. It may not be easy, setting your own boundaries, making your own choices, rising above people’s judgment. But YOU! you can set an example for women everywhere. Do this and you would have done more than I have ever done, and it will be my honor to be known not as Amitabh Bachchan, but as your grandfather!! With all my love Your Dadaji your Nana.” (Also Read: Rohanpreet Singh And Neha Kakkar Celebrate Their First Diwali Together In Dubai) 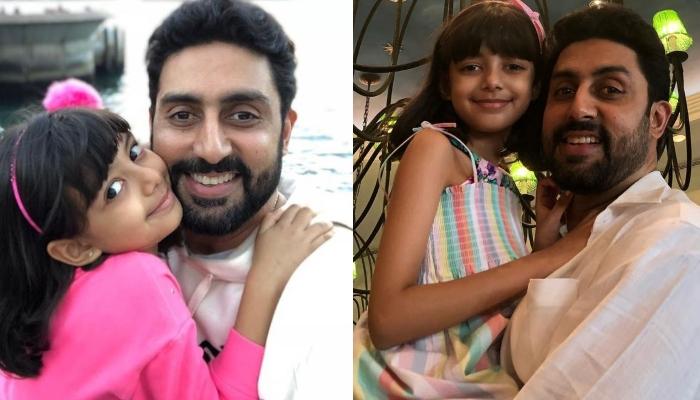 No matter how stern a man might be in his personal and professional fronts, you will see a completely different side of him when he’s with his little one. It may sound cliché, but fatherhood does change a man. Nowadays, fathers aren’t just the breadwinners in the family as they equally contribute